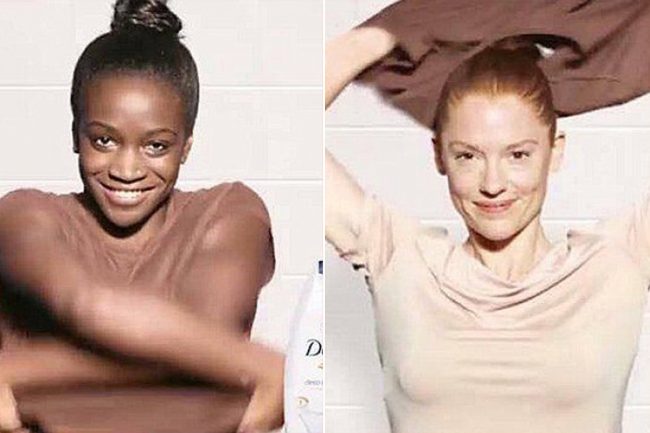 Customers are fuming over a racist new Dove ad showing a black woman turning herself into a white woman — which the company’s since yanked, claiming it “missed the mark.”

The ad was released Saturday afternoon and showed four pictures – two of the smiling black woman pulling her t-shirt over her head and two of her apparently morphing into a white woman. A bottle of Dove body wash was displayed in the corner.

The red-faced personal care brand quickly pulled the ad and issued a statement on its Facebook page.

“Dove is committed to representing the beauty of diversity. In an image we posted this week, we missed the mark in thoughtfully representing women of color and we deeply regret the offense that it has caused,” Dove said. “The feedback that has been shared is important to us and we’ll use it to guide us in the future.”

The apology received a barrage of outraged comments.

“What exactly were yall going for? What was the mark… I mean anyone with eyes can see how offensive this is. Not one person on your staff objected to this? Wow. Will not be buying your products anymore,” one woman wrote.

“This is gross. You think people of color can just wash away their melanin and become white? What were you going for, exactly? Your creative director should be fired,” another said.

The Dove debacle comes months after German skincare company Nivea came under fire for its “White is Purity” deodorant ad.