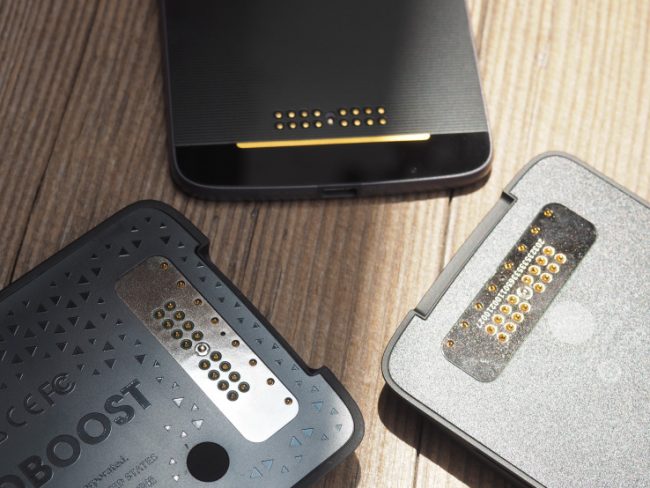 It’s hard to find a legitimately bad flagship phone these days. Sure, one peeks its head out from time to time, but on a whole most phones are pretty good. The screens, the cameras, the internals. There are always a few bits that could use improving (see: battery and durability), but the gulf between good and bad isn’t any near where it once was.

And for the past several generations, most flagship devices even more or less look the same. Sure, the fingerprint reader/home button gets moved around here or there, but most casual observers probably couldn’t pick a non-iPhone/Galaxy out of a lineup. Perhaps it’s a matter of copied intellectual property, or maybe there really is an ideal form factor for a pocket-sized communication device that’s mostly screen.

It’s tough to distinguish yourself when you’re not a top-tier smartphone company – a qualifier that, in the States at least, seems to apply to pretty much everyone who isn’t a Samsung or Apple. Given how cut throat the overcrowded industry can be when you’re not in the two top (and, let’s be honest, even if you are), it’s no surprise that the many companies seem to be looking increasingly toward distinguishing factors.

Gimmicks aren’t bad in and of themselves. After all, once it hits mainstream acceptance, it’s not really a gimmick anymore. It’s a standard feature. Take waterproofing. When a handful of manufacturers started dipping their phones in aquariums at trade shows, it initially seemed like a cry for attention. But we kind of all secretly wanted one. A few years later, it’s a no-brainer for flagships because it’s not just about going snorkeling, it’s about getting caught in a downpour and, yes, accidentally dunking the thing in the toilet.

The flipside of that is the Alcatel’s A5 LED. It’s the phone equivalent of those L.A. Lights shoes from the 90s, with heels that flashed every time they hit the ground. It’s a hail Mary pass of sorts and a tacit acknowledgement that maybe smartphones aren’t much more than big, expensive toys.

A good gimmick, on the other hand, is one that actually brings something to the experience of owning a phone. It’s a rare moment of thinking outside the box that, if pulled off successfully, can actually be a cause to rethink things. LG’s own numbers have stumbled a bit, but that’s not for lack of interesting ideas. The company was among the first to introduce a dual-lens camera (the V20) and to offer a taller form-factor (G6), both of which are becoming standard features in flagships.

Of course, those handsets are also great examples of how a good gimmick alone isn’t enough to make a phone a success. An even more obvious example comes in the form of the G5. The handset was released at what seemed the height of interest in modular phones. But the result was downright disastrous, with the phone shouldering much of the blame of the company’s resulting financial straits. That didn’t, however, mean that modularity is doomed to failure. Announced not all that long after the G5, Motorola/Lenovo’s Moto Z line has been a marked success for the company. It’s already announced millions sold – an accomplishment for a line many simply wrote off at launch.

The differences between the execution of the phones is pretty stark. For starters, the Z is a solid piece of hardware, an object lesson in that fact that you can’t rest on gimmick alone. The magnetic power system is also the best modular execution to date. And then there’s the fact that the phone launched with multiple useful mods. Like a game console needs games, a modularity phone without mods is a pretty usefulness proposition.

Of course, singular success for Motorola does not translate to a game changer in this case. Other companies are likely flirting more with the idea of modularity, but it’s not like several other companies rushed out to launch their own modular solution in the past year.

The jury is still out on the HTC U11. Even more so, really, as the phone hasn’t even hit the market. For now, though, Edge Sense seems like little more than a gimmick. The actual functionality it brings to the handset is limited at best. The company has promised more uses for the squeezable sides moving forward, but the ability to launch apps isn’t the sort of compelling feature that drives users to buy phones.

There’s nothing wrong with a gimmick, so long as it isn’t a gimmick for its own sake. To be successful, it needs to be a meaningful feature that adds useful functionality to a device, executed in a way that doesn’t detract from the rest of the phone experience. And it’s important not to be myopic. Manufacturers can’t rest on its laurels and skimp on the rest of the hardware and software.

Otherwise, you might as well be selling light up sneakers.
[“Source-ndtv”]