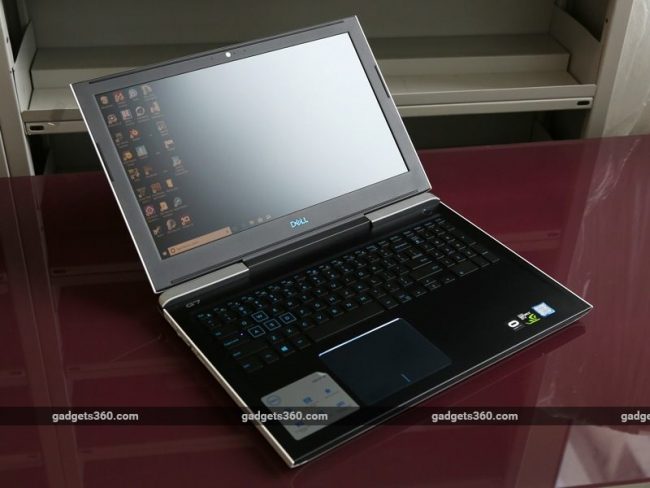 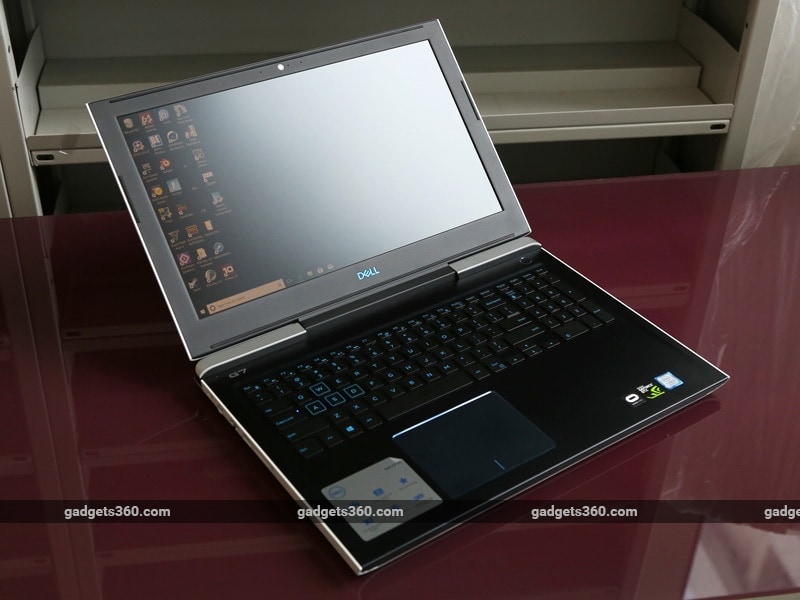 Dell is one of the major hardware players in the PC gaming space, and the company only recently updated its lineup in India. We’ve already tested some pretty good gaming laptops so far this year, such as the MSI GS65 Stealth Thin 8RF and Asus ROG Zephyrus M to name a few, and it’s now time to test Dell’s brand new G series of gaming laptops.

Up until now, Dell has used its Inspiron series to offer ‘budget-level’ gaming solutions while its Alienware series caters to the enthusiast crowd. For 2018, the company plans on shifting its Inspiron gaming series into the new G line of laptops, which is currently comprised of the G3 and G7 models. Today we’ll be testing the flagship offering in India, which is called the Dell G7 15 7588. This top-end model features an IntelCore i9 CPU and an Nvidia GTX 1060 GPU with Max-Q, which is the highest spec that Dell is offering. Let’s see if this new gaming laptop makes the cut.

The core design of the G7 15 isn’t all that different from Dell’s existing Inspiron 15 7577 series, except for the ‘G7’ logo that’s been added. However, the company is moving away from the previous red/ black motif and embracing new colour combinations such as gray/ blue and the alpine white/ blue that we have on our unit. It looks really neat and the matte texture doesn’t attract smudges or fingerprints easily. However, colour scheme aside, the overall design language doesn’t feel too fresh, when compared to what the competition is offering. 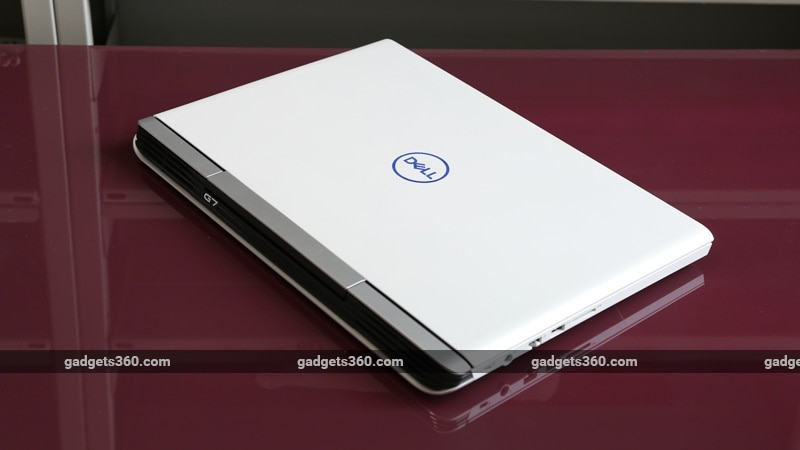 Build quality is fantastic. The G7 15 feels sturdy, and this is partly thanks to the magnesium alloy chassis that’s borrowed from the Alienware series. Metal inserts for the palm rest area and lid add to the sense of rigidity. This laptop is slim enough to be portable and we managed to fit it in most backpacks with ease. However, it’s not as portable as some of the gaming laptops we’ve recently tested since 25mm is still a sizable thickness. The weight is around 2.63kg, which is also something you’ll notice.

The Dell G7 15 features a 15.6-inch, Full-HD IPS display with a matte finish. Reflections aren’t an issue and the brightness is also adequate for most use cases. We found the viewing angles to be nice and wide too, and colours are rendered vividly. The thick borders around the display look a bit dated, but thankfully the HD webcam sits in its rightful place above the screen. The laptop has a single hinge design with good torsion, so the hinge easily stays in place at any angle.

The vents for hot air are placed at the back of the laptop, while the intake vents are on the bottom. You can get a peek at the metal heatsink that’s painted blue through the vents, which looks cool. All the ports are placed on the sides of the laptop. There are three USB 3.1 ports, one Type-C Thunderbolt 3 port, HDMI, an SD card reader, Gigabit Ethernet, and a headphone/ microphone combo socket. The ports are spaced well enough from each other that there shouldn’t be any issue when plugging in accessories. There’s a single power LED that faces the front, but nothing that shows hard drive activity or the battery level. 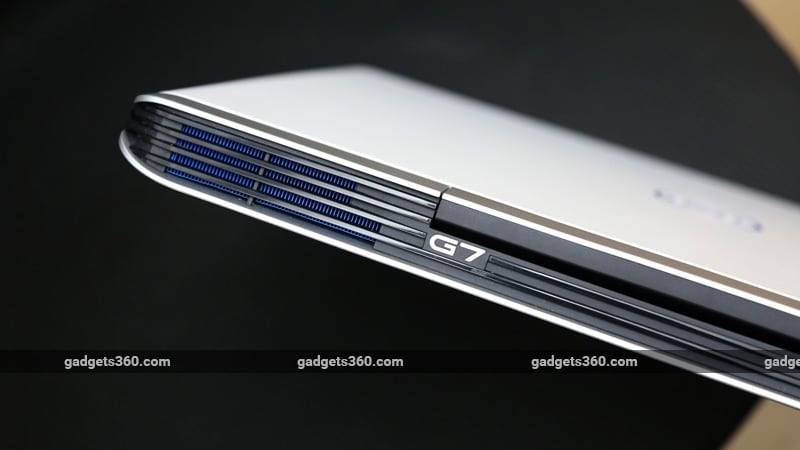 The keyboard area is spacious with plenty of room for a full-size numerical pad. The chiclet keys have individual backlighting with two brightness levels, but the colour cannot be changed from the default blue. The power button is isolated in the upper right corner and also houses a fingerprint sensor for Windows Hello authentication. The palmrest area is roomy and the trackpad is generously sized too. The Dell G7 15 ships with a 180W charger, and according to the India site, there’s a limited-time offer that gets you a complementary backpack too.

The Dell G7 15 7588 model that we have today features an Intel Core i9-8950HK CPU, which is part of Intel’s Coffee Lake lineup. The ‘Core i9’ is a step higher than Intel’s ‘Core i7’ product stack, but like the latter, it still has six CPU cores with multi-threading, giving you a total of 12 threads to play with. Compared to the Core i7-8750H six-core CPU which is commonly used today in mid-range to high-end gaming laptops, the Core i9 chip runs at a much higher base clock speed of 2.9GHz, with the ability to turbo up to 4.8GHz.

It also has a bigger L3 cache, and the ‘HK’ in the name signifies an unlocked multiplier, thereby making it much easier to overclock. Withn the G7 15, Dell hasn’t provided any overclocking utility of its own and neither does it advertise this feature, so even though you can easily do it with Intel’s XTU program, we suggest caution. Any damage done will not be covered under warranty. 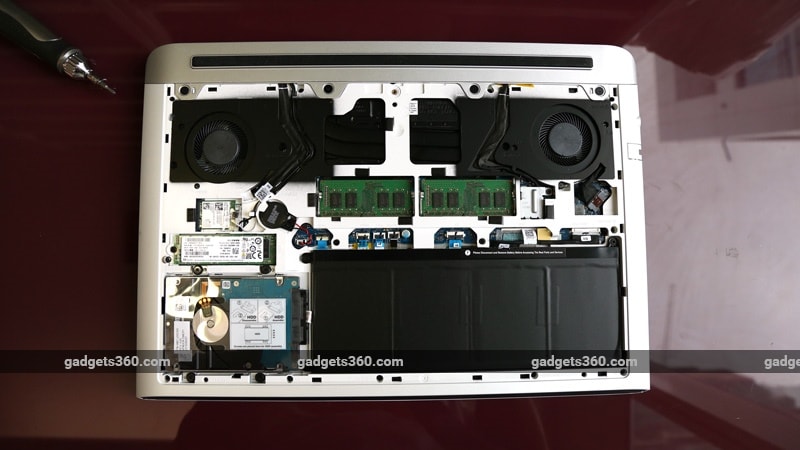 Our Dell G7 15 7588 came with 16GB of DDR4 (2666MHz) RAM, running in dual channel mode; a 128GB PCIe M.2 SSD boot drive along with a 1TB (5400rpm) hard drive; and an Nvidia GeForce GTX 1060 with Max-Q and 6GB of GDDR5 RAM. Dell also offers another variant with a Core i7-8750H CPU. Other specifications include Wi-Fi 802.11ac with 2×2 MIMO antennas, Bluetooth 5, and a 56WHr 4-cell battery. The bottom of the laptop comes off very easily as it’s held in place by just a single screw. Here, you can access the SSD, hard drive, both RAM slots, and the battery. Dell also confirmed to Gadgets 360 that these parts are intended to be user-replaceable and doing so will not void the warranty.

Dell ships Windows 10 Home with the G7 15, along with Microsoft Office Home and Student 2016, and a 15-month subscription to McAfee Anitvirus. You get a bunch of apps from Dell too, such as Dell Update, and Power Manager which lets you set various charging profiles depending on how you use the laptop (fast charging, always plugged in, etc). Mobile Connect lets you recieve phone calls and messages from your iPhone or Android phone. Dell has also tied up with Rivet Networks, and this laptop comes with its SmartByte software which lets you prioritise data traffic for online chats, streaming video, and downloading when on Wi-Fi.

The hallmark of a good gaming laptop is its ability to handle taxing 3D games cooly and quietly. While the Dell G7 15 relies on air cooling, it does have two exhaust fans to help push out the hot air. We’re glad to see that this design works quite well, as the palm-rest area and most of the keys that you’d typically use for gaming do not get hot. The bottom gets a bit warm at best, but it’s probably not a good idea to use this laptop on your lap since your thighs would block air intake. With regular use, the fans are silent since the Nvidia GPU powers down, but when gaming, they tend to get fairly loud. 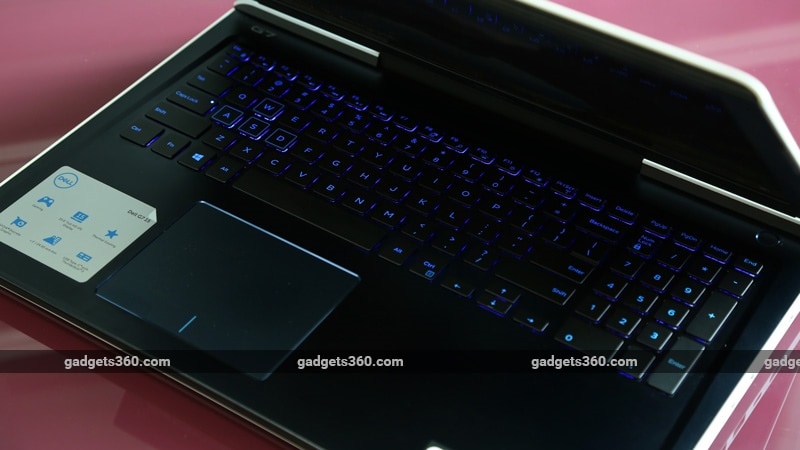 The Core i9 CPU isn’t any more of a resource hog than the Core i7-8750H for casual use, as both have the same 45W TDP rating. However, the higher clock speed does allow it to perform better in tasks such as file compression. Benchmarks such as Cinebench R15 returned higher scores in both single- and multi-threaded tests. Oddly, our unit posted slightly lower scores in some CPU tests such as SiSoft Sandra, and Blender took a bit longer to complete its benchmark when compared to the Zephyrus M. However, the overall CPU performance was in line with what we observed in our Asus ROG Zephyrus Mreview, which had the same CPU.

The SSD helps quicken boot times and programs load swiftly too, but its performance is very basic. The Hynix unit inside only manages bandwidths of around 500Mb/s sequential and random read speeds and about half of that for write speeds. These are still better than any mechanical hard drive but average when compared to higher-end SSDs.

The Dell G7 15 is designed with gaming as its primary purpose and it doesn’t disappoint. The GTX 1060 with Max-Q is capable enough for gaming at 1080p, even though we would have preferred a standard GTX 1060. We spoke to Dell about this decision and were told that given the product positioning and targeted price point of the G7 series, this was the optimal choice. Plus, using anything more powerful would have narrowed the gap between this and the Alienware series, which is why if you want advanced features such as a display with a higher refresh rate, G-SYNC, etc, from Dell, you’ll have to spring for an Alienware model.

We averaged around 103fps in Doom, which is very good

Some games are heavily dependent on the CPU and do benefit from the Core i9. For instance, we got roughly the same average framerate in the Rise of the Tomb Raider benchmark when compared to a laptop such as the Asus ROG Zephyrus M, which was running a full-blown GTX 1070. Deus Ex: Mankind Divided was a bit too much for the GTX 1060 to handlewith the settings cranked all the way up, and we averaged only about 27fps. Metro: Last Light Redux ran surprisingly well, averaging around 46fps.

We managed to get very good framerates in Doom, typically averaging 90-100fps on the Foundry level with all the settings pushed to the max. GTA V ran well too, averaging 45fps. We also saw good framerates in newer titles such as Assassins Creed: Origins and FarCry 5, in which we got 52fps and 63fps respectively. We then tested popular online titles such as PUBG and Fortnite. In the former, barring some texture pop-ins, we got a solid framerate of 59fps, while in Fortnite, we managed to average 75fps with the ‘Epic’ graphics preset.

The Dell G7 15 has stereo speakers that face outwards, so there’s little chance of blocking them when you’re using it. The speakers get fairly loud and audio quality is decent for movies and gaming. The keyboard is very comfortable for typing, and the blue backlighting is even across all the keys. The keys have a good 1.4mm of travel and aren’t noisy. The HD webcam is pretty average, and footage looks grainy even in a well lit room.

Battery life is about average too. Even with Optimus engaged and working on Google Docs most of the time, we managed only a little bit more than four hours before we got the low battery warning. With Battery Eater Pro, the Dell G7 15 7588 lasted for 2 hours and 45 minutes. The laptop supports quick charging, which can top up the battery up to 25 percent in 15 minutes.

Verdict
Dell currently has a pretty unique position in the market with its top-end G7 15 7588 laptop. At Rs. 1,52,400 (with taxes), it’s one of the few (if not only) gaming laptops at this price to feature an Intel Core i9 CPU. Even though you compromise on the GPU a bit, the faster CPU tends to make up for it in some games. Dell also offers the exact same configuration, but with a Core i7-8750H CPU instead, for about Rs. 1,29,000 (with taxes) which seems like a better option. In terms of value, the top-end G7 is probably not the best pick for gaming as for the same price (or there about), you can get laptops with a better GeForce GTX 1070 GPU and even a 144Hz refresh rate display. The new HP Omen 15 is one such laptop that comes to mind.

The look of the Dell G7 series is nice, but we would have liked a fresher design. Even though it’s a little boxy, the laptop doesn’t overheat even when you’re in the thick of battle. Those looking for the fastest laptop CPU for content creation might want to consider this top-end G7 model. If gaming is going to be your primary objective, then a laptop with a GeForce GTX 1070 GPU laptop is what you should be aiming for at this price.
Price: Rs. 1,52,400 (with taxes)