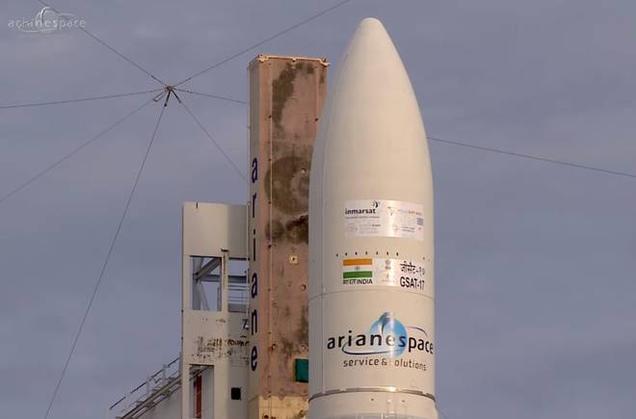 India’s latest communication satellite GSAT-17 was today successfully launched by a heavy duty rocket of Arianespace from the spaceport of Kourou in French Guiana.

Configured around I-3K extended bus, GSAT-17 with a lift-off mass of about 3,477 kg carries payloads in Normal C-band, Extended C-band and S-band to provide various communication services. It also carries equipment for meteorological data relay and satellite based search and rescue services being provided by earlier INSAT satellites.

The European launcher Arianespace Flight VA238 blasted off from Ariane Launch Complex No 3 (ELA 3) at Kourou, a French territory located in northeastern coast of South America, couple of minutes delayed than the scheduled time of 2:29 hrs IST.

GSAT-17 that will strengthen ISRO’s current fleet of 17 telecommunications satellites was launched into a Geosynchronous Transfer Orbit (GTO). This will be third satellite launch by ISRO this month, the other two being first developmental flight of GSLV MkIII and PSLV C-38 missions — both from Sriharikota spaceport.

GSLV MkIII successfully launched GSAT-19 satellite on June 5 while PSLV-C38 orbited Cartosat-2 Series satellite along with 30 co-passenger satellites on June 23 from the Satish Dhawan Space Centre. ISRO, which has been dependent on Ariane-5 rocket for carrying its heavier satellites, is developing GSLV Mk III for this purpose.

Thanking Arianespace, Director Vikram Sarabhai Space Centre Dr K Sivan who watched the launch from the mission control centre called it a “text book mission”. Noting it as a special mission for ISRO, he said “GSAT-17 is a need of the hour for ISRO and India as it provides the continuity in services of ageing two satellites, as well as augmenting our transponder capability, and widening our horizon to mobile satellite services as well as to Antarctica areas.”

Hellas Sat (member of the Arabsat Group) is a premium satellite operator, offering services in Europe, the Middle East and South Africa from the orbital position of 39 East. Inmarsat is the leading provider of global mobile satellite communications services.

The total payload carried on Flight VA238 is approximately 10,177 kg.

GSAT-17 will be the 21st satellite from ISRO to be launched by Arianespace, and its designed in-orbit operational life is about 15 years.

After its injection into GTO, ISRO’s Master Control Facility (MCF) at Hassan takes control of GSAT-17 and performs the initial orbit raising maneuvers using the Liquid Apogee Motor (LAM) of the satellite, placing it in circular Geostationary Orbit, the Indian space agency has said.