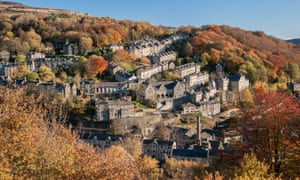 Seldom does a philosopher get to rule. Now one does – if, sadly, posthumously. The late Roger Scruton’s government-backed report on “building better, building beautiful” is political philosophy in the raw. It comes hot on the heels of the government’s agriculture bill proposing a complete shift in farm support away from food and into “public money for public goods”. If adopted, these twin pillars of rural and urban environment could see the greatest reordering of Britain’s public face in the 75 years since the war. They are both about that most elusive concept, beauty.

The farm bill remains opaque. The 1947 Town and Country Planning Act, which separated towns from countryside as an inherent “good”, all but collapsed under David Cameron’s developer-driven government. It delivered sheds, hypermarkets and housing estates sprawling unplanned round almost every town in southern England. It turned communities into raging nimbys, and planning decisions into court cases. Rules on everything from tower blocks to expanded villages were made so uncertain that planning defaulted to anyone who could afford a lawyer.

Post-Brexit, farm subsidies will now go to “land management”. This is ill-defined but rumoured to embrace soil quality, woodland and wildlife protection, rewilding and public access. There is no sign as yet that ministers will decide how much of Britain’s countryside the public will be allowed to treat as beautiful. But that surely is a “public good”. We now need only an Aristotle to stride the land.

As for buildings, we now have an Aristotle. Scruton is not afraid to summon the names of Kant and Stendhal to his cause. No, he says, beauty is not “subjective”. We can tell it from ugliness because we can debate and agree or disagree about it. This is not a matter of free markets but of market regulation. As Scruton says, we are democrats, local as well as national. We have a duty to one another and our children to protect and promote public beauty. That this should come from a philosopher of the right is the more welcome.

Scruton’s report is co-authored by Nicholas Boys Smith of the consultancy Create Streets. It opens with a devastating critique of the Cameron government’s 2012 planning framework. It left a landscape “littered with debris”, a planning regime “biased towards ugliness” and a public that has “lost confidence in developers and their regulators”. The report cites a planning inspector allowing windowless flats in Watford, knowing they would be instant slums, because he “lacked grounds for their refusal”. This is planning in a state of collapse.

For the moment, development is driven by the same absurd machismo typified by HS2, a belief that prosperity lies in centralism, bigness, disruption and public extravagance. Small and local is for wimps. Beauty is for herbivores. The so-called national infrastructure commission is not a regulator but a lobby for the “big eight” building contractors and their grand projects.

As Scruton and Boys Smith point out, this approach to planning is deeply un-green. It favours the destruction of old buildings with tax reliefs and starter subsidies. It imposes 20% VAT on conserving the “embedded energy” of existing buildings, but subsidises the carbon release of new ones. In addition, identikit estates have densities so low as to require a car journey for every need. This is global warming “planned in” to the system.

It is refreshing to read a Whitehall report that gets the message of America’s Ed Glaeser and others, that “green means urban”. Happiness lies not in anonymous sprawl but in the adaption and intensification of existing city buildings. New York has the lowest per-capita carbon footprint in the US. The report advocates the “gentle densification” of Britain’s underoccupied cities. West Yorkshire has 2,400 mills lying vacant, offering 52,000 new homes. Britain’s low property taxes effectively subsidise emptiness, which in London – with one of Europe’s lowest densities – conceals potential homes for “millions more households”.

There is no mystery about what people find beautiful. A Mori survey for the report found they wanted “vernacular and human scale”. They hated towers, though they did not mind high density. Indeed, the highest London densities are not in tower block estates but in Victorian street terraces. The most popular urban neighbourhoods are in tightly packed old parts of towns, in London’s Soho and Shoreditch, in Manchester’s northern quarter and Birmingham’s Jewellery Quarter, in Hebden Bridge and Halifax. Here are buildings designed to last. As the report says: “The beautiful building is one that outlives its original use.”

The report is not anti-development. It rather demands that promoting beauty be explicit in planning control – and ugliness explicit in refusing consent. It proposes meticulous and specific changes in regulations. Communities should be empowered to vote down ugliness. Builders should know what is allowed and not allowed, to speed up their work. They should be steered towards popular urban forms, such as streets, squares, shops, trees and water, to the “fine-grained city”. There is even a suggestion of a fruit tree for every house and bricks for birds and bees. Scruton does twee.

We have yet to see what “public goods” are envisaged for Britain’s farmland and countryside. But for towns and cities, Scruton and Boys Smith have demanded a total reversal of policy. A blueprint of passionate intensity, for a dignified and democratic planning regime. The opposition will be fierce. As the urban and rural landscape already demonstrates, builders have grown used to getting their way.

A measure of the task can be seen this week in Norwich. Here an inquiry is sitting into the crudest imaginable 20-storey tower block, planned to rise over the city centre and leer at its ancient cathedral. There is not another city in Europe that would even think of permitting such an outrage. That is the challenge Scruton bequeaths us.

• Simon Jenkins is a Guardian columnist

… and never more dangerous than now, as the crisis escalates across the world. The Guardian’s accurate, authoritative journalism has never been more critical – and we will not stay quiet. This is our pledge: we will continue to give global heating, wildlife extinction and pollution the urgent attention and prominence they demand. We recognise the climate emergency as the defining issue of our lifetimes. This month we made an important decision – to renounce fossil fuel advertising, becoming the first major global news organisation to institute an outright ban on taking money from companies that extract fossil fuels.

You’ve read 173 articles in the last four months. We chose a different approach: to keep Guardian journalism open for all. We don’t have a paywall because we believe everyone deserves access to factual information, regardless of where they live or what they can afford to pay.

Our editorial independence means we are free to investigate and challenge inaction by those in power. We will inform our readers about threats to the environment based on scientific facts, not driven by commercial or political interests. And we have made several important changes to our style guide to ensure the language we use accurately reflects the environmental emergency.

The Guardian believes that the problems we face on the climate crisis are systemic and that fundamental societal change is needed. We will keep reporting on the efforts of individuals and communities around the world who are fearlessly taking a stand for future generations and the preservation of human life on earth. We want their stories to inspire hope. We will also report back on our own progress as an organisation, as we take important steps to address our impact on the environment.

We hope you will consider supporting us today. We need your support to keep delivering quality journalism that’s open and independent. Every reader contribution, however big or small, is so valuable.