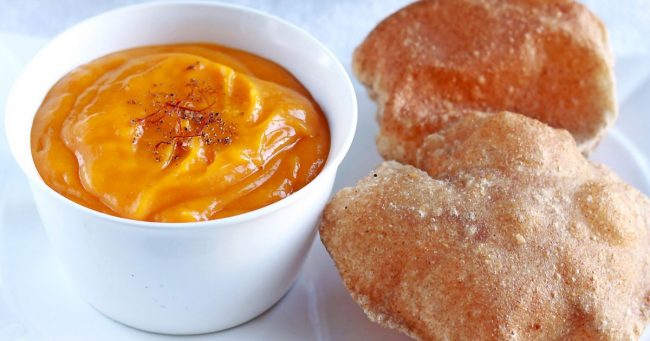 Summers are here in full swing and it’s time for mangoes to raid our refrigerators and fruit baskets. Also dubbed as the king of fruits, mangoes are enjoyed in many forms. As soon as the summer strikes, you can find them in smoothies, dips, mocktails, shakes, custard and so much more. One such desi delight is aamras.Aamras is a divine blend of Alphonso mangoes with a signature pulpy consistency. Relished mostly in the western part of the country like Gujarat and Maharashtra, aamras works both as a stand-alone dish as well as a perfect accompaniment to piping hot pooris. Yes you heard us. While most of us would inadvertently pick the most savoury gravy to go with our pooris, in the western part of the country, sweet and indulgent aamras makes for a delightful team with your beloved pooris. In fact aamras and poori is also prepared extensively during festive occasions such as Akshay Tritiya. The most preferred quality of mangoes to make aamras is Alphonso or hapus.

These days, with the coming of blenders and food processors, making aamras has become fairly easy. But you would find many argue for the original pulpy consistency of aamras which is possible to get only when you make it with your hands. At times, ghee and milk are added to the pulp to enhance its flavour.

Traditionally, the ripe alphonso mango is massaged well with its skin on. This was done to make the pulp soft; the pulp was then squeezed out using bare hands. A pinch of cardamom powder is added for flavour. Until the coming of the blenders, the wooden blenders were mostly used to blend the aamras. Aamras is supposed to be served chilled. Therefore, for best aamras, refrigerate your mangoes for at least four hours before you take them out to make aamras.

This season, indulge yourself with possibly one of the best mango preparations ever thought of by mankind. Here’s a delicious aamras recipe, with easy step-by-step guide to help you with the same.
Happy summers everybody!
[“source=food.ndtv”]