Apple has released its latest iOS adoption numbers, revealing that the version 10 of its mobile operating system now powers 76% of compatible devices. 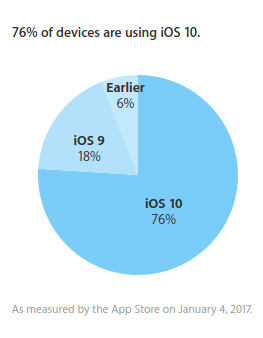 That’s a rise of 13% compared to the last time these figures were released, which happened in November. In October, the adoption rate stood at 60%. Coming to other versions, iOS 9’s share now stands at 18%, while earlier iOS versions claim just a 6% share.

The Cupertino-based company recently rolled out iOS version 10.2, which brought along a host of changes, including over 100 new emoji as well as new wallpapers and iMessage screen effects. A new TV app, as well as changes related to the Emergency SOS feature, Music app, and Camera app were included as well.