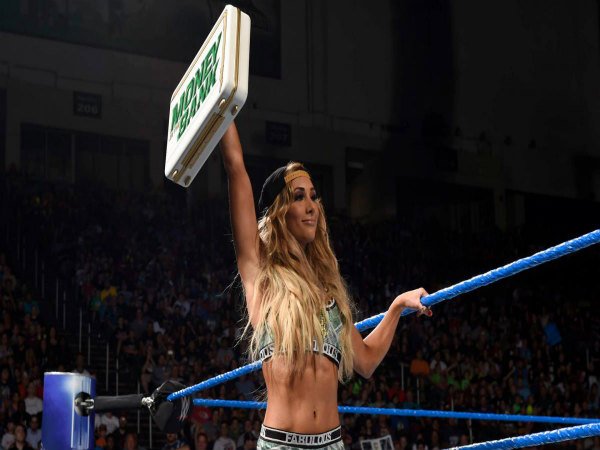 Bengaluru, June 27: Five elite performers from the Smackdown Women’s division created history by competing in the first-ever Money in the Bank ladder match on June 18th.

Charlotte, Natalya, Becky Lynch, Carmella and Tamina Snuka tore the house down at the bygone Smackdown-exclusive PPV. However, the finish was quite a debatable one, for sure.

Although Carmella won the match, she never climbed the ladder and grabbed the briefcase. This is the reason why Daniel Bryan canceled her victory and announced a second ladder match on the upcoming edition of Smackdown Live.

The Wrestling Observer brought some spoilers around the upcoming matchup. It stated that one of the heels will emerge victorious in this bout.

Since Carmella was the original one who was penciled to win this contest, she still stands the best chance to come out of San Diego, CA with briefcase in her hand.

However, this time, his ‘boy’-friend, James Ellsworth will not be around her since he is banned from ringside.

So, she will be on her own on Tuesday Night. Plus, Carmella will become the only 2nd WWE superstar after CM Punk to win two consecutive Money in the Bank ladder matches.

The source also proceeded to state the creative does not want to have a successful cash-in with the Money in the Bank briefcase, this time.

So, Carmella will not be able to win the Smackdown Women’s Championship through this jackpot. She will also become the third superstar to have a failed attempt with the briefcase.

The veteran wrestling journalist, Dave Meltzer from the same source have suggested as of why WWE has created the chaos around the first-ever Women’s Money in the Bank match.

The company wanted to garner as much attention they could have in this match and so they came up with the controversial finish.

On this matter, Meltzer’ said: “They (WWE) pushed the idea that this first match was historical, then gave people an ending that would be anything but, with the idea of using that to garner interest in a television rematch where that first match result was negated.”