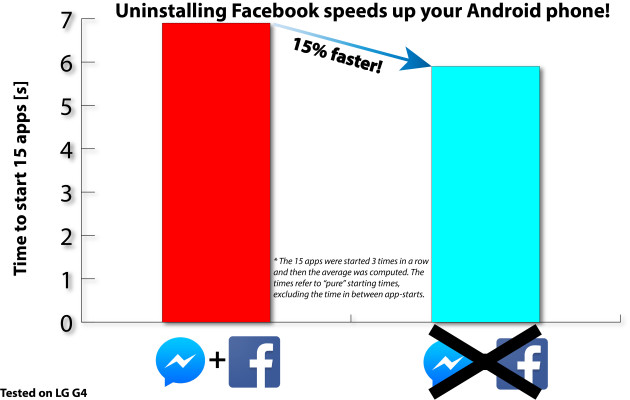 Facebook is a pretty awful app, it seems like we can all agree on that much. It sucks battery life, seems to hog memory and more. In fact, Android Central recently noticed that an end user could improve the Android experience pretty drastically by simply uninstalling the app. One Reddit user took that recommendation to heart while also deciding to benchmark how much performance improved after uninstalling the app.

The results are noticeable.

Reddit user “Pbrandes_eth” ran the DisoMark benchmark to automatically open 15 different apps on an LG G4, ranging from Kindle to Gmail, and timed how long it took to execute each task with Facebook installed, and again with it uninstalled.

“The 15 apps were started 3 times in a row and then the average was computed,” Pbrandes_eth explained. “The times refer to “pure” starting times, excluding the time in between app-starts.”

The end result found that it took an average of 7 seconds to open the apps with Facebook and Facebook Messenger installed on the system. After removing the apps, it took under 6 seconds to complete the same tasks. That might not seem like much all things considered, but it actually shows a 15 percent increase in speed, all because the user removed two apps.

It’s pretty stunning and again shows why you might want to uninstall Facebook. Sure, you might miss out on easier access to photos and status updates from friends and family, but you can always use the Web browser to check up on everything.  It seems the performance gains are well worth it.