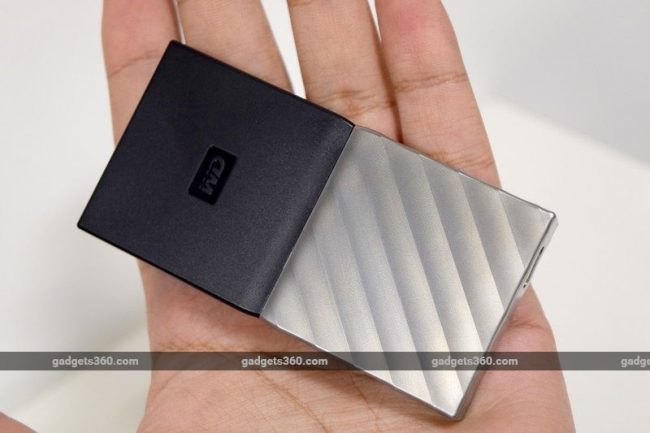 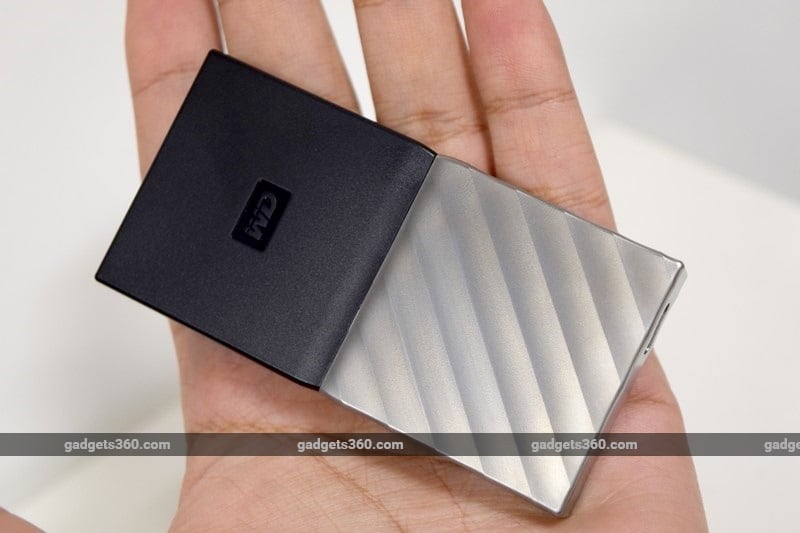 The WD brand is most closely associated with hard drives, but the company is embracing solid-state storage in a huge way. After launching a whole range of internal SATA and PCIe SSDs, the company has turned its attention to the portable market. The new My Passport SSD complements the recently redesigned My Passport line of 2.5-inch hard drives but is of course a lot tinier and more expensive.

Portable SSDs are still a fairly niche product category, but they make a lot of sense if you value speed and reliability above all else. The market is fairly crowded with options from Samsung, Adata, SanDisk (a WD company), and others. We’ve got a 256GB version of the WD My Passport SSD in for review today, and we’re going to see how it stacks up against the others.

The best thing about portable SSDs is how easy they are to just slip into a pocket. We recently reviewed the Samsung T5, and we’ve also tested the Samsung T1, SanDisk Extreme 500, and Adata SE730 in the past. All of them are very small with rounded sides or corners that make them easy to carry around, but WD has decided to go the other way. The My Passport SSD has an almost perfectly rectangular body with all hard angles for all its edges and corners. This makes it less comfortable and convenient in day-to-day use. This drive is also considerably taller than its competitors, making it feel a bit awkward in most pockets.

On the other hand, it is extremely light at 40.8g, and it does look great. WD has carried forward the new design language that was introduced with its My Book and My Passport drives last year. The body is visually divided into two, with an upper half that’s just a plain black plastic block, and a lower half in dark gunmetal finish with diagonal ribs that wrap all the way around the body. The look was conceived by a design firm called fuseproject, founded by the internationally acclaimed Yves Behar, and is intended to symbolise the coming together of people’s physical and digital lives. 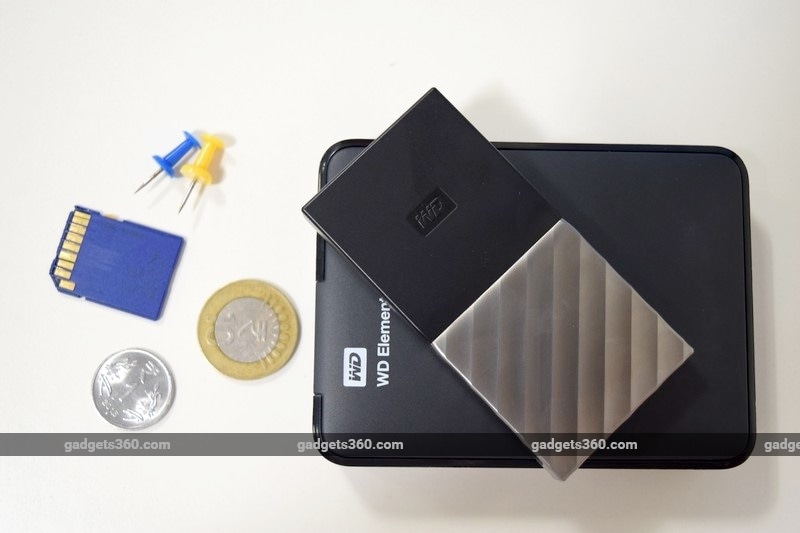 There’s only one colour combination, as opposed to the range of bright pop colours that My Passport drives are available in. It looks good at first, but the metal portion picks up smudges all the time and is very difficult to keep clean. Strangely, WD has not given this drive an activity LED, and we constantly found ourselves second-guessing whether or not it was safe to eject the drive from a PC.

The My Passport SSD comes with only a tiny instruction leaflet, a warranty information sheet, and a USB cable. Usually a cable would be one of the least interesting things about a storage device, but this one deserves a mention. For starters, it’s approximately 50cm long. As opposed to the stubby little cables that we’ve seen with other portable SSDs, this one can’t be stashed away easily, making it even more difficult to carry the My Passport SSD around.

More importantly, it has USB Type-C plugs on both ends, and comes with a female Type-C to male Type-A adapter which allows for connections to old and new hosts. While that might sound good, this kind of adapter breaks the USB Type-C standard and is explicitly not allowed by the USB Implementers Forum, which is the industry body that creates such standards and certifies USB devices.

The reason for this is that USB Type-C encompasses a wide set of connection types, and devices need to negotiate things like power delivery and host control protocols when they are connected. This cannot happen if a Type-C device is bridged through a legacy Type-A port. While the My Passport SSD itself might be perfectly able to work with this arrangement, it is incredibly important that you never try to use this adapter or the entire cable with any other USB Type-C device. WD has designed the adapter with notches to try to prevent it from being used with other cables, but there’s nothing stopping anyone from using the cable as a whole. It’s extremely surprising that a company as established as WD would choose this approach, instead of including an extra Type-C to Type-A cable in the package like Samsung has done with the SSD T5. 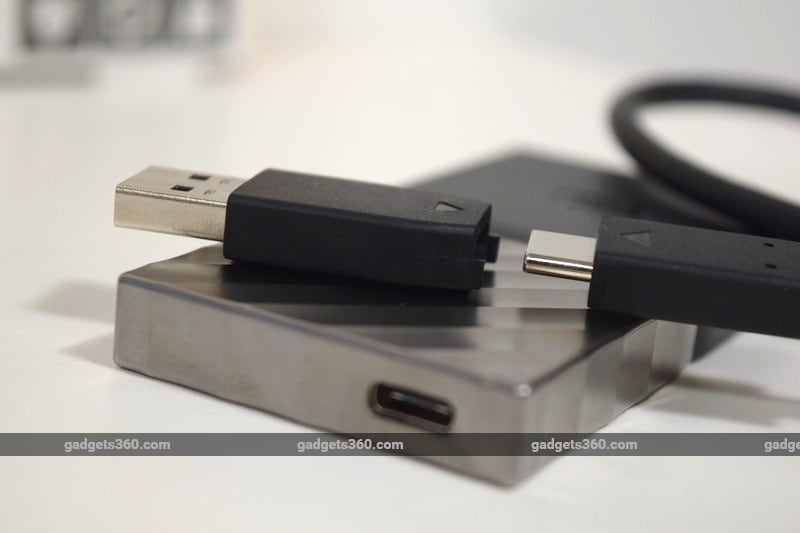 Going by the shape and size of this device, it’s easy to guess that WD has used a standard M.2 SSD with a USB bridge. WD hasn’t disclosed the kind of flash memory or the controller in use, but software diagnostics recognise it as a SanDisk SATA 3.0 M.2 module based on 15nm planar NAND. This isn’t surprising at all given that many of the two brands’ products are very similar. You can choose between 256GB, 512GB, and 1TB capacities. The formatted capacity of our 256GB review unit was 238GB, and it was set to use the exFAT file system by default which ensures compatibility across any Mac or Windows PC released in the past decade or so.

The drive is described as “USB 3.1 Gen 2 ready” but there’s no way you’re going to get 10Gbps or even 5Gbps out of a SATA SSD. Speed is rated at up to 515MBps, which is the best-case scenario for sequential reads. We used CrystalDiskMark 5.5 to test these claims, and achieved sequential read and write speeds of 456.1MBps and 454.6MBps respectively, slightly edging out the Samsung SSD T1 and Adata SE730 but trailing the new Samsung SSD T5.

Random read and write speeds at a queue depth of 32 were surprisingly low, at 30.88MBps and 71.03MBps respectively, and other portable SSDs we’ve tested have achieved much better. It seems that the My Passport SSD can’t take advantage of higher queue depths, because scores for this drive as well as all the other SSDs were at around that same level when tested with that set to 1. The My Passport SSD was connected to the USB 3.1 Gen 2 Type-C port on our MSI X370 Xpower Gaming Titanium motherboard.

According to WD, this drive can survive the shock of a drop from of up to 1.98m (6.5 feet), but it isn’t water or dust resistant. You’re also covered by a three-year limited worldwide warranty. In terms of data security, 256-bit AES hardware encryption is supported.

There’s quite a bit of software on the drive itself, and you can choose to install or ignore it. WD Drive Utilities lets you check the SSD for errors and format it, while WD Security lets you set a password to take advantage of the 256-bit encryption. If you forget this password, there’s no way to recover it. However, formatting the drive will reset it to its factory condition so while your data might be safe from prying eyes, there’s no disk theft deterrent.

If the My Passport SSD is locked, it will show up on different host PCs as a read-only virtual CD. On this you’ll find a tiny utility called WD Unlocker, which as its name suggests, lets you type in your password to unlock the drive. You can’t set an automatic time-out and there’s no failsafe to wipe the drive after a number of failed password attempts, but this should be enough for people who need privacy more than security.

WD Backup is similarly bare-bones. You can choose to use your WD drive and a Dropbox account (no other cloud services are supported), you can select specific subfolders on your hard drive, and you can set a syncing schedule. Finally, there’s WD Discovery, a dashboard that stays running all the time and lets you launch the other utilities and check for updates. It also shows a long list of ads for third-party software and services, some of which are free and some of which are discounted for WD customers. While the first two utilities are available for Windows and macOS, Backup and Discovery are only for Windows. If you want to use Time Machine on macOS, you’ll have to reformat the drive to use the HFS file system, which means you lose Windows interoperability. 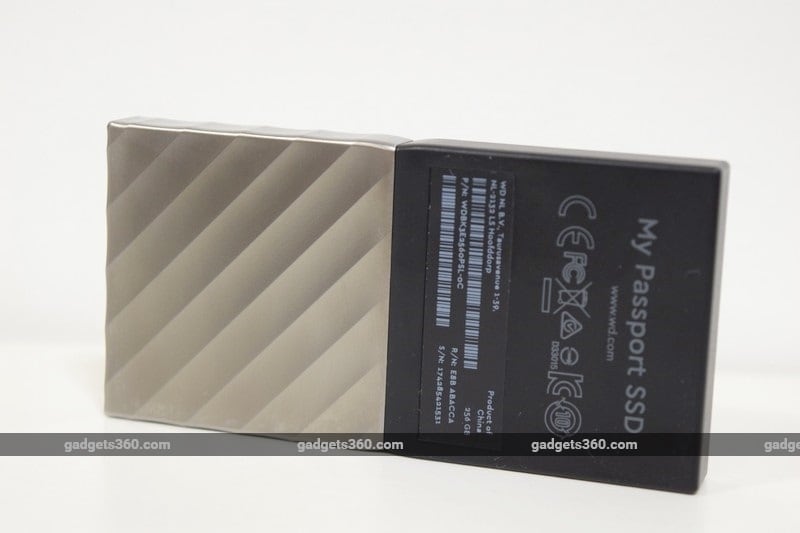 Verdict
The WD My Passport SSD has a lot of things going for and against it. It looks great, but it really isn’t as easy to carry around as its competitors. It works well, but the random read and write scores, which more closely represent real-world usage, weren’t great. The software features add a bit of value, except for the somewhat spammy Discovery app.

WD now gives you the option of internal as well as external hard drives and SSDs. The My Passport SSD is 3-30x faster than the My Passport hard drive, but you’ll wind up paying 7-10x as much for the equivalent capacity. Once you get used to the speed of a portable SSD, it’s really hard to go back even to USB 3.0 hard drives. If you can afford the luxury, there’s no doubt that this is the way to go. For the majority of people though, the convenience and reliability will have to be weighed very carefully against the cost.