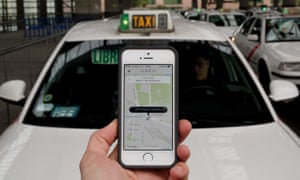 Uber has quietly begun monitoring the movements of some of its drivers in an experimental Texas-based pilot that is attempting to flag up dangerous driving.

Abrupt movements in a smartphone’s accelerometer, a movement sensor built into most smartphones, can show when a driver accelerates and brakes too quickly – consistent with driving too close to the car in front, or “tailgating”.

Uber did not explicitly tell drivers that their movements are being tracked, but the company says it is informing users only when it needs to access the data after a company complaint. Selected drivers in Houston have been monitored for the trial since it started in late 2015.

Uber told the Guardian it is running or is planning several experiments designed to gain more influence over the behaviour of drivers and passengers in its vehicles, which are owned and operated by freelance contractors. Taken together, these efforts could amount to a subtle form of quality control.

The company says it is considering sending dashboard phone mounts to drivers accused of texting while driving, and installed passenger-facing mirrors in the backseats of operators in Seattle based on evidence it causes riders to “self-moderate” their behavior. It has also put a children’s sound toy called a Bop It in the back of cars across Charlotte, North Carolina, to dissuade intoxicated passengers from distracting drivers.

The Uber app offers rides on demand using a network of lightly regulated drivers. It has spread to 300 cities globally and is one of Silicon Valley’s most powerful firms, with backers including investment firms Google Venturesand Benchmark. Uber’s app has been downloaded millions of times and it claims to have served up more than 1bn rides.

Founded in 2009, the company has become the platonic ideal of a successful tech startup and has replaced the taxi cab for many consumers. Its last-known private valuation of $62.5bn is more than the market capitalization of both Ford and General Motors.

But for all its success, one major stress point for the company has been its reliance on human drivers because, unlike computers, they are unpredictable and hard to monitor.

The company seeks to get around this problem with its autonomous vehicle lab in Pittsburgh, Pennsylvania, staffed by former roboticists for Carnegie Mellon University. At an industry conference in October, Uber’s chief executive, Travis Kalanick, said it could be “five, 10, even 15 years” before there are autonomous vehicles that are completely safe.

The recent behavior experiments are a stopgap until then, said Uber’s chief security officer, Joe Sullivan, a former Facebook executive. “A world of exclusively autonomous vehicles is not happening overnight,” Sullivan told the Guardian. “There’s a lot we can do to make roads safer before that happens.”

Sullivan recalled an Uber ride he took shortly after joining the company in which the driver recklessly zoomed down US 101, the main highway that connects San Francisco and Silicon Valley.

Sullivan, who worked as a federal prosecutor before working for tech companies, realized that even if he gave the driver a poor rating, there would be no hard evidence for Uber to show the driver where he went wrong. Uber users can only assess drivers with star ratings and written comments.

While monitoring drivers more closely could boost safety for riders, interviews with current and former Uber drivers suggested the program could be a mixed blessing for the operators of Uber’s fleet.

If a consumer unfairly complains that a driver was speeding when he wasn’t, data from the tracking programme could exonerate the driver. On the flip side, there’s nothing to stop Uber from proactively looking at the data to identify speeders and tailgaters. The company says people who consistently drive unsafely shouldn’t be driving.

Uber began reviewing the data of some Houston drivers late last year. If one of those drivers received a poor rating after a trip, the company may then inform the driver that they used their geolocation data to investigate the trip.

Uber drivers can see that the company logs their trips and the company’s privacy statement says it has the right to access their geolocation data. “They know we’re trying to make the product better,” Sullivan said. “Drivers are used to us doing experiments in different contexts.”

Another San Francisco startup called Zendrive could offer a window into what Uber has in mind. The company says on its website that it is “improving driving for everyone through better data and analytics”. The company is pitching itself to ride-hailing services and taxi companies.

CEO John Matus told the Guardian that Zendrive’s driver monitoring tools were comparable to being asleep in the back of a car. “You’d still get a good sense if the driver was slamming the brakes or screeching the wheels,” Matus said. “It feels a little bit like magic. You wouldn’t expect a smartphone to be able to do all that.”

Zendrive says it can gather a plethora of data points just from monitoring how a smartphone moves. Location data can show if drivers are too quick to accelerate, too late to brake, regularly speed or constantly changing lanes – all of which could suggest reckless driving.

Automobile insurance companies, including Progressive and Metromile, have experimented with similar metrics. But it remains to be seen if consumers will accept sharing such data with companies.

Uber faces another balancing act if it wishes to monitor driver behavior proactively. Many drivers have joined a class-action lawsuit filed in San Francisco in an effort to be recognized as full employees entitled to benefits, rather than independent contractors. The case, which goes to trial in June, revolves around the question of how much control Uber has over drivers’ work.