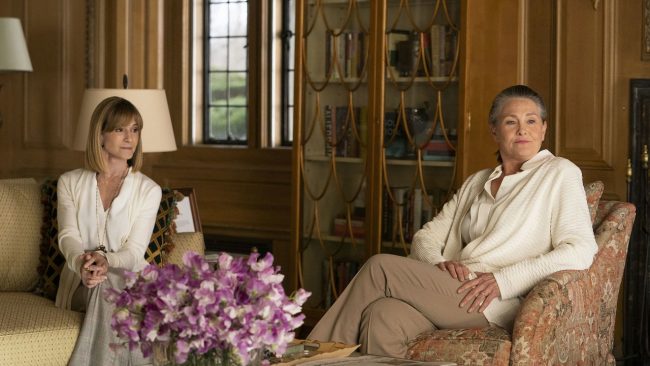 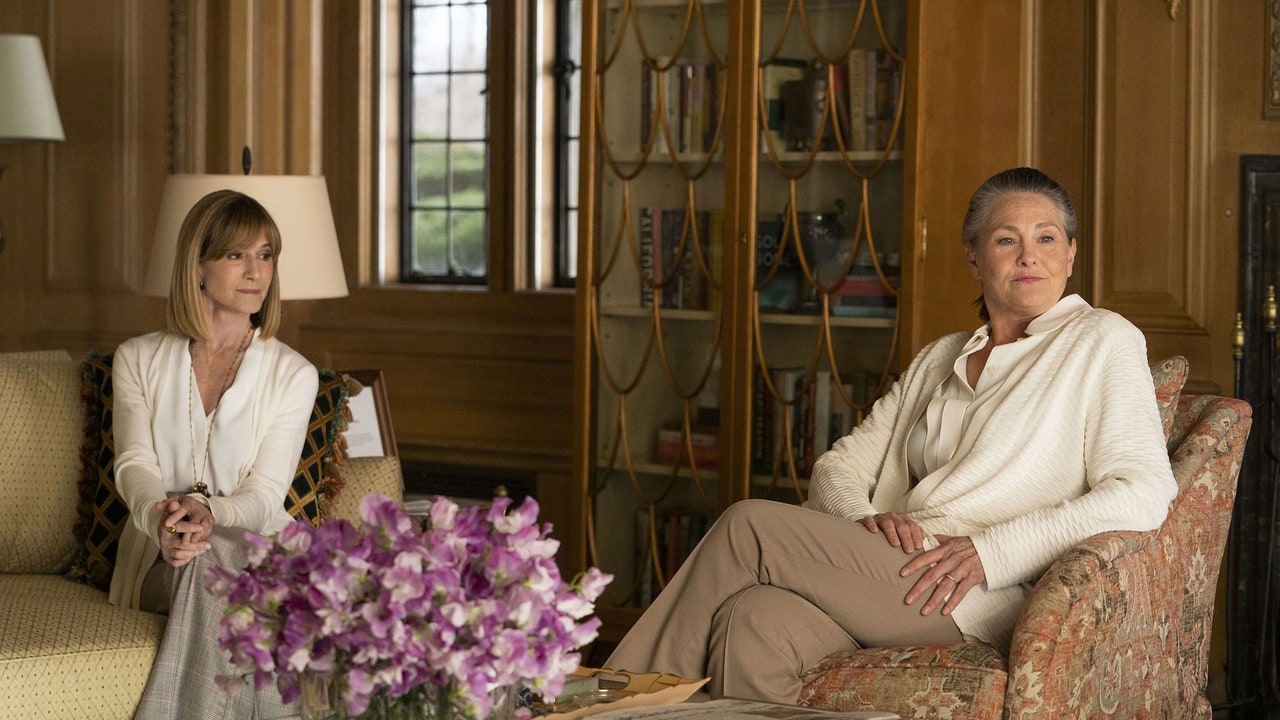 When Succession creator Jesse Armstrong set out to make his HBO series about power and family conflict in the world of New York media he had a very specific type of business mogul in mind. Armstrong’s long road to showrunner began with a film script he wrote more than a decade ago called Murdoch, and it was the tabloid-friendly, nouveau rich families like the Murdochs, the Trumps, and the Redstones that inspired Succession’s clan of striving and conniving Roys. But in Season 2, Episode 3 “Hunting,” a new kind of player enters the game.

Logan Roy announces his intentions to acquire PGM, a media company owned by the Pierce family, which opens the door for Armstrong to aim his razor-sharp wit at what Logan calls “those blue-blooded fucks” of the old media world. The Pierce family—who have yet to appear on screen but simmer in the background of this episode—appears to be based loosely on the Sulzberger clan, which has run The New York Times since 1896. (The fictional Pierces own a paper called The New York Mail.) Armstrong told the Times that ”even the Sulzbergers” were partially inspiration for the Roys. But here is why the Sulzbergers and their ilk also make perfect fodder for Succession Season 2’s rival clan.

As previously reported, stage legend Cherry Jones will play head of the family Nan Pierce, Holly Hunter is CEO Rhea Jarrell, and Annabelle Dexter-Jones plays Naomi Pierce, whom we discover in the third episode is a friend of Roman’s partner Tabitha. Roman tries to reach out to Naomi to get the ball rolling on a deal, but Naomi alerts the rest of the family, who shut negotiations down before they start. This infusion of great actresses, alone, is fantastic news for such a masculine power-heavy show. But dig even a little bit into the Sulzberger legacy and you’ll find even more cause for celebration.

The Sulzbergers are far from the only media company in America to pass their legacy down the generations. But in this era of dwindling journalistic revenue, the major old media families like the Grahams (of The Washington Post/The Post fame), the Bancrofts (The Wall Street Journal), the Chandlers (Los Angeles Times), and the Taylors (The Boston Globe) have all left the business, leaving only the Sulzbergers holding on. 39 year-old Arthur “A.G.” Sulzberger is the current publisher of The New York Times and he’s the fourth Arthur Sulzberger in the family to hold that position.

The tradition of handing down the paper from father to a first-born son also named Arthur is such an obviously medieval practice at The New York Times that A.G.’s dad and predecessor, Arthur Ochs “Pinch” Sulzberger Jr., kept a Steuben crystal sculpture of a gold-handled Excalibur embedded in stone on his desk—a gift and potential Shiv Roy-worthy act of passive-aggression from his passed-over sisters when he was named publisher and the family’s next “king” Arthur. (His nickname, “Pinch,” is a diminutive of his father and predecessor, Arthur Ochs “Punch” Sulzberger Sr.)

Despite running the paper of record for over a century, the Sulzbergers (or Och-Sulzbergers as they’re sometimes called) aren’t quite a household name outside New York media and certain social circles. The most famous member of the family outside of media is a cousin, Arthur Golden, who wrote the best-selling novel Memoirs of a Geisha. That’s because unlike the Hiltons, Trumps, Kennedys, Murdochs, Hearsts, Redstones, Kochs, and other moneyed families whose antics often land them in the tabloids, the Sulzbergers have studiously and steadfastly avoided public scrutiny.

Even the Bancroft family—which sold The Wall Street Journal off to Rupert Murdoch in 2007—were known to consist of some “restless socialites and horse enthusiasts whose hobbies required access to substantial funds” as New York Magazine put it in 2008. Their situation could well have been inspiration for the one Roy family employee Gerri Kellman is describing in Episode 3 when she asks if “some of the young cousins” in the Pierce family “want yacht money.”

Murdoch’s pursuit and acquisition of the Bancroft-owned Wall Street Journal in 2007 will almost certainly influence some of Succession this season. It should be noted that members of the Bancroft clan said in 2011 that they regret selling their family’s paper off, though there’s an argument to be made that Murdoch was actually the best thing that could have happened to that paper. But the Sulzbergers, with their unprecedented run of media power and high-minded ideals about their own legacy, seem to be the real persons of interest to Armstrong and his Succession writers.

The irresistible contrast between the Roy and Pierce families couldn’t be clearer. The Roys are new money—so much that Logan seems to resent his children for growing up with the wealth he never had as a child—while the liberal, patrician Pierces have seemingly spent generations coolly steering their lucrative empire straight into the danger that is our increasingly rocky media landscape. Though he’s often pitched as a villain of Succession, what’s been true, generally, in American culture is that we’re inclined to be much friendlier to self-made kings like Logan Roy than we are to those, like the Pierces and the Sulzbergers, who inherited their wealth.

In his 2009 piece on Arthur Sulzberger Jr. titled “The Inheritance,” Vanity Fair contributor Mark Bowden described the then-leader of The New York Times and heirs like him thusly: “even in middle age he seems costumed, a pretender draped in oversize clothes, a boy who has raided his father’s closet.” Sounds a lot like Kendall Roy, too, if you ask me.

Arthur Sulzberger Jr.’s reign as Times publisher from 1992-2017 was a rocky one. In a 2005 New Yorker profile about him also titled “The Inheritance,” famed Times writer and author of the definitive history of the Times, The Kingdom and the Power, Gay Talese tells author __ Ken Auletta__ cooly, “You get a bad king every once in a while.”

But even so, Sulzberger’s “bad” reputation is barely a blip compared to other media moguls. Diane Baker, a former chief financial officer of the New York Times Company, described him as having the personality of “a twenty-four-year-old geek” and (gasp!) it’s publicly known that he likes Star Trek. Sulzberger no doubt made some bad business decisions, including fumbling the 2014 firing of Times executive editor Jill Abramson in a rare high-profile move that put the Sulzbergers exactly where they prefer not to be: in the public eye.

But when it comes to the antics of their personal lives, the Sulzbergers play their cards impossibly close to the vest. Their secrecy is a result of intensive training on the weight and responsibility of what it means to be part of this particular family. According to a 2008 report in New York Magazine, that training begins at a very young age: “[The] clan starts going to family meetings when they’re 10 years old and by 15 they understand their roles as caretakers of the New York Times. There’s also a one-day orientation session for kids turning 18 or 21—or people marrying into the family—to learn about the legacy of the Ochs-Sulzbergers.” Do we think Succession’s Tom had to attend Roy family orientation in order to marry Shiv? Should he have?

The Sulzbergers operate the Times under a family trust designed to prevent individual heirs from selling out. In other words, if Succession’s Pierce family works like the real-life Sulzbergers, then Logan Roy will need to get a family consensus before he can buy the company out from under them. And if the Pierces are anything like the Sulzbergers then there’s plenty of material for the Succession writers to work with. A family friend told New York Magazine that the Sulzbergers’ dedication to journalistic integrity is “a noble, familial thing that courses through their veins and anyone who strays from that gets slapped down pretty quickly.”

So who are these other, potentially eccentric Sulzbergers? Well there’s David Perpich, nephew to Arthur Jr., who helped run a D.J.-training school called Scratch D.J. Academy. There’s Arthur Jr.’s daughter Annie Sulzberger, now a Head of Research for Netflix’s The Crown. (Takes a family dynasty to know one?) And then that 2008 New York Magazine piece has a whole rundown of characters that would make any prestige TV writer salivate:

As in any family business, the pool of talent in the bloodline is limited, and the bubble of affluence doesn’t always produce heirs with the proverbial fire in the belly. What it does produce, in the case of the Sulzbergers, is a variety of artists, musicians, academics, teachers, and even a fashion stylist. Hays Golden, son of Arthur Golden, is an economist seeking a Ph.D. at the University of Chicago. Ben Dolnick, the 26-year-old son of Lynn Dolnick, Michael Golden’s sister, is a successful fiction writer living in a brownstone secured by his grandmother, Ruth Holmberg. Victoria Dryfoos, daughter of Katie, lives in Martha’s Vineyard and has sought to “promote awareness of … and provide income for Huichol families,” a Native American group in Mexico. (She’s also committed to maintaining the historical integrity of lighthouses, according to a long letter she wrote to a local paper.) Sarah Perpich, David’s 28-year-old sister and Sulzberger’s niece, is a fashion writer, stylist, and personal shopper. “For me, fashion is life, and life is art,” she writes on her blog. Meanwhile, Dan Cohen’s son Alex, a student at NYU, plays drums in a band called the Mysterious Case of Jake Barnes with cousin Dave Golden (making it the unofficial Ochs-Sulzberger house band). He also flexes his editorial muscle on his Facebook page: “Alex Thinks Sarah Palin Can Suck A Dick And Leave Us All Alone.”

Various Sulzbergers have left their mark, literally, on the world. The name of the family trust, Marujupu, is comprised of the names of the four children of the late matriarch Iphigene Ochs Sulzberger: Marian, Ruth, Judy, and Punch. In 1929, the explorer Admiral Richard Evelyn Byrd named one of the glacial hills in Antarctica after them, Marujupu Peak, not far from Ochs Glacier and Mount Iphigene.

But as fun and fascinating as some of these extra credit Sulzbergers may be, it’s very likely that it was Arthur Jr. himself who inspired Armstrong to dig into this other brand of New York dynastic power. Back in 2002 at UC Berkeley, Arthur Sulzberger Jr. spoke to Orville Schell, then-Dean of the Graduate School of Journalism, in front of a large audience. Digging into the history of many Arthur Sulzbergers running The New York Times, Schell began: “You said the difference was that they [the North Korean Kim dynasty] were only two generations, and your family was four.” Arthur jokingly cut in: “I don’t like where this is going one damn bit! And if you don’t be a little more careful, I may nuke you!”

Schell continued: “My question is, really, I mean, The New York Times is governed and held in a very unique way in corporate America. It is a family company, and the family, I assume, decides who the successor is in a way that isn’t either particularly corporate or democratic. Tell us a little bit about that, and what effect you think it has on how this great paper can comport itself in the world.” Sulzberger, trained since childhood for this job, swiftly deflected: “There’s a lot behind that question. First of all, just to get it on the record, the family did go for talent.” The audience erupted into laughter. But that question of non-democratic succession in ostensibly democratic America is exactly the subject Armstrong and his writers are eager to dig into.

To learn more about the Sulzbergers I highly recommend Mark Bowden’s lengthy Vanity Fair profile or, if you have even more time to spare, you can dive into all 870 pages of The Trust: The Private and Powerful Family Behind The New York Times, by Susan E. Tifft and Alex S. Jones. Or, if you prefer, you can just keep tuning in to Succession and keep up with their fictional counterparts: the Pierces.