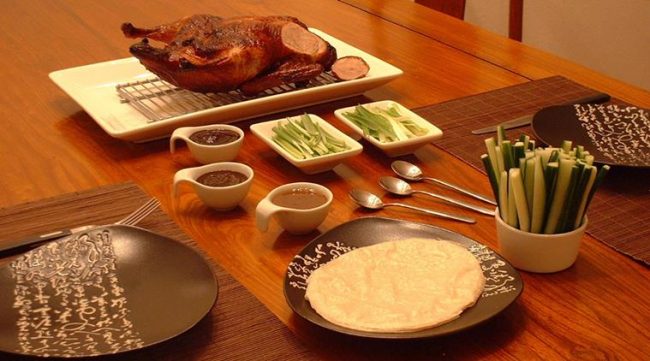 For over two decades Tea House Of The August Moon at the Taj Palace Hotel was one of the finest Chinese diners in the national capital’s diplomatic enclave. It inexplicably closed down in 2009, leaving a huge hole that has now been filled by the newly-opened Spicy Duck.

The restaurant is elegantly simple, in shades of white, brown, gold and bits of blue. It captures the contemporary vibrancy of the space combined with the authenticity at the heart of the cuisine.

Led by the expatriate chefs Cheang Chee Leong and Chee Kuai Oon, Spicy Duck retains the authenticity of original Chinese dishes and manifests comfort and yet offer luxury dining to patrons through its unpretentious presentations.

“I have visited quite a lot of Chinese restaurants in the city but unfortunately, the food they offer is extremely different from the original cuisine,” said Chef Cheang.

“I surveyed and figured out what is it that these restaurants lack and thought that people of Delhi should try a new taste.”

“Use of homemade concoctions and infused oils for cooking, with minimalistic use of condiments imparts lightness to the preparations at the restaurant kitchen. Most of the ingredients and raw material, including spices and vegetables, are sourced from the country of origin to keep the offering most authentic in nature,” according to the chef.

“There were two reasons for us to open a new Chinese experiential dining restaurant. One was to recall the long-lost legacy of Tea House of August Moon,” said Taj Palace General Manager Gaurav Pokhariyal.

“The second reason is that in our endeavour to be innovative and keeping up to the changing times, we needed a cuisine shift from Vietnamese to a cuisine widely accepted and experimented with, by the Indians.”

“We aren’t really calling it fine dining as the objective is to make the restaurant very unpretentious, comfortable and relatable to the people who like Chinese across the city. And we plan on raising the bar by offering the most authentic cuisine in the most contemporary, modern and metropolitan way,” Pokhariyal explained.