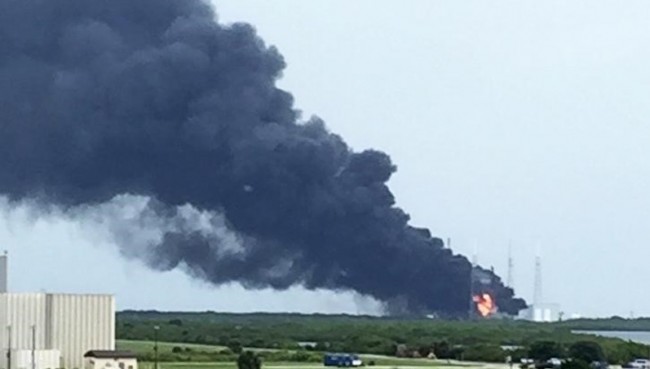 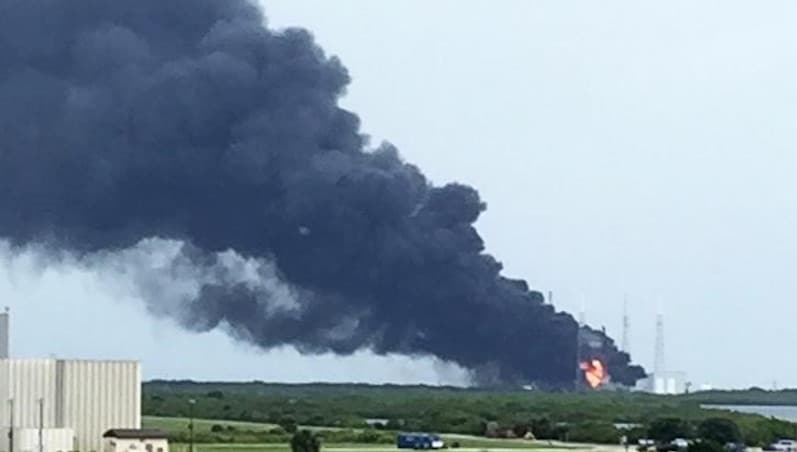 SpaceX Rocket Explodes on Launchpad With Facebook’s Internet Satellite on Board
HIGHLIGHTS
The explosion destroyed the Israeli communications satellite
Mark Zuckerberg disapointed over SpaceX’s launch failure
The accident is the second of its kind since SpaceX was founded in 2002
An unmanned SpaceX Falcon 9 rocket exploded on the launch pad during a test in Florida on Thursday, destroying a satellite that Facebook planned to use to beam high-speed internet to Africa.

The blast at Cape Canaveral – though it caused no injuries – marks a setback for the California-based private space firm and its founder, internet entrepreneur Elon Musk, who wants to revolutionize the launch industry by making rocket components reusable.

Dramatic footage broadcast by ABC News showed the rocket burst into a roaring ball of flame amid what appeared to be a succession of blasts – sending its payload tumbling to the ground as a dense plume of black smoke filled the air.

“At approximately 9:07am ET (13:07 GMT), during a standard pre-launch static fire test for the Amos-6 mission, there was an anomaly at SpaceX’s Cape Canaveral Space Launch Complex 40 resulting in loss of the vehicle,” the firm said.

“Per standard operating procedure, the pad was clear and there were no injuries.”
But the explosion destroyed the Israeli communications satellite that the Falcon 9 was due to deliver into orbit on Saturday — drawing a dismayed reaction from Facebook chief Mark Zuckerberg.

“As I’m here in Africa, I’m deeply disappointed to hear that SpaceX’s launch failure destroyed our satellite that would have provided connectivity to so many entrepreneurs and everyone else across the continent,” Zuckerberg said on his Facebook page.

Facebook was contracted to use the Amos-6 to provide broadband internet coverage for large parts of sub-Saharan Africa and other remote parts of the world as part of the social media giant’s Internet.org initiative.

“Fortunately, we have developed other technologies like Aquila that will connect people as well,” Zuckerberg said, referring to the solar-powered plane being developed by Facebook to make the internet available in remote areas.

“We will keep working until everyone has the opportunities this satellite would have provided.”

European satellite operator Eutelsat – Facebook’s partner in the project – said in a statement it was committed to expanding broadband access in Africa despite the loss of the Amos-6.

Heaviest payload
A Nasa spokeswoman told AFP that emergency services at the nearby Kennedy Space Center were monitoring the situation and conducting air quality tests to ensure there is no threat to the health of staff.

Officials at the center advised workers to remain inside until further notice, but Brevard County Emergency Management said there was no threat to the public from the incident.

The Amos-6 was the heaviest payload to date for a SpaceX rocket, with an estimated value of between $200-300 million (roughly Rs. 1,337 crores to Rs. 2,004 crores), according to John Logsdon, former director of the Space Policy Institute at George Washington University.

The accident – the second of its kind since SpaceX was founded in 2002 – comes just over a year after a Falcon 9 rocket failed after liftoff on June 28 2015, destroying a Dragon cargo capsule bound for the International Space Station (ISS).

Before that, SpaceX had logged 18 successful launches of the Falcon 9 – including six of 12 planned supply missions to the ISS carried out as part of a $1.6 billion (roughly Rs. 10,696 crores) contract with Nasa.

It had carried out another eight successful launches since June 2015, including last month when a Falcon 9 successfully placed a Japanese communications satellite in orbit, and then landed intact on a floating drone ship.

Before then the firm lost several rockets as it attempted to land them upright on an ocean platform at the end of a flight — a crucial part of its strategy for reusable spacecraft.

‘Valuable experience’
While the blast is likely to disrupt SpaceX plans for six more launches between now and January 2017, experts made clear that such incidents are a normal part of the space learning curve.

“It’s clearly a setback, but how great the setback is and how long the delay, it’s impossible to know until there is more information available,” said Logsdon.

He noted that the launch pad damaged on Thursday was distinct from the one that will serve to launch SpaceX’s Crew Dragon, intended to ferry astronauts to the ISS starting in late 2017.

Nasa said in a tweet that Thursday’s SpaceX explosion “reminds us that spaceflight is challenging. Our partners learn from each success & setback.”

Loizos Heracleous, a professor of strategy at Warwick Business School, said such setbacks were par for the course – and would not affect SpaceX’s stated long-term goals of slashing the cost of space flight through the use of reusable rockets, and eventually colonizing Mars.

“SpaceX is gathering valuable experience, and each accident brings lessons on how to enhance the integrity of the craft for future missions,” he said.

“Given that SpaceX is working to provide Nasa with a way to transport not just cargo, but also astronauts to the International Space Station, it is especially crucial that such learning takes place before that happens.”