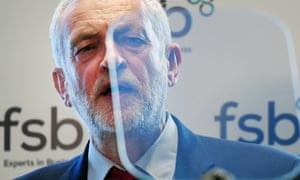 In defence of large companies named and shamed by Corbyn (Corbyn declares war on M&S – but retailer ‘does not recognise figures’, 12 April), Experian said that the data taken from its report showing very late payment of invoices do not apply to the majority of invoices. Capita said that only 10% of its payments are made later than 30 days of receipt. But even such a small percentage of late payment by a large company can cause huge pressures down the supply chain, and it invites questions about corporate ethics. Jeremy Corbyn raises a valid alarm about a potential national scandal.
SP Chakravarty
Bangor, Gwynedd

Jeremy Corbyn is right to “declare war” on late-paying companies. Data on the scale of the problem comes as no surprise. My late father worked into his 80s doing bookkeeping for a small engineering firm. They did minor maintenance on ships. Every time I spoke to my father about work, he seemed to be chasing up overdue payments (cheques in those days) from major shipping companies. On some occasions, his boss had to pay his employees out of his personal bank account. Nothing has changed. That’s what big companies do. That’s why they’re big and why small businesses struggle or go to the wall.
Karen Barratt
Winchester

• The claim by M&S to “not recognise” Jeremy Corbyn’s figures in his accusations of late payments to suppliers is pathetic. The company protests that its average time from being invoiced to payment is 54 days, despite that already being almost double the standard one-month term. And obviously if that is the average, it means there are payments that take considerably more than 54 days, as Labour highlights.
Norman Miller
Brighton, East Sussex

Your editorial on productivity (Brexit makes solving the productivity puzzle a priority, 10 April) raises an important point about low productivity, but is disingenuous about causes.

Those of us with children of average ability struggling to find decent employment in the labour market see daily the impact of a seemingly unlimited supply of qualified and hard-working immigrant labour which is exploited by the inefficient and incompetent management that characterises much of British business. Hire and fire is the norm, combined with awful working environments and marginal pay. Work benefits are history for most, sickness is penalised and opportunity non-existent.

The underlying problem is that UK society has no understanding of professional management, just as it belittles manufacturing and most forms of commercial endeavour outside the professions. Productivity will not improve until wealth creators get the respect they deserve and this has to come through cultural change and education.

The state can do two things. First, to only procure from companies with accredited management development; and second, to provide the infrastructure and fiscal incentives to remove any excuses for not developing this capability.

It is up to opinion formers (like this newspaper) to overcome their distaste for “trade” and champion professional management and the state resources needed to achieve and sustain it.
Paul Wood
Southampton

• By all means worry about low productivity, the lack of a living wage and poor working conditions, but don’t forget the elephant in the room: bosses are simply taking advantage of a ready supply of cheap migrant labour. Rather than pin our hopes on a difficult-to-police, statutory living wage, simply pursue an even-handed immigration policy that is not biased against Britain’s unskilled citizenry. The market will increase unskilled pay.

A reduction in the import of cheap labour will result in the transfer of purchasing power from the majority haves to the minority have-nots, as the many menial jobs that cannot be outsourced abroad become more costly. Not to do so is to say goodbye to a living wage.
Yugo Kovach
Winterborne Houghton, Dorset

• A key factor in the UK’s awful productivity record is that far too much time and energy goes into devising elaborate schemes for generating funny money rather than putting in the effort needed to invest for the long term in actual wealth creation.

For over a century the UK has shown a distinct preference for finance over industrial capital, a situation made even worse over the last 40 years since the deregulation of the City. This will not change until the rules are changed to make it more profitable to invest in the production of real goods and services than in the high-class gambling that is par for the course in the City. Given the Tories’ reliance on City money it’s doubtful that meaningful change will come from that quarter.
Roy Boffy
Sutton Coldfield, West Midlands