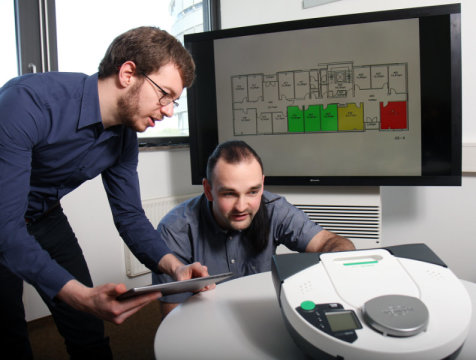 The Internet of Things is steadily progressing: not only computers, but also machines, cars and household appliances are connected. Linking devices from different manufacturers is proving to be difficult. Researchers from the University of Kaiserslautern have found a solution: they are developing a user-friendly software system that connects devices from different manufacturers. The user can decide who has access. The system is ideal for companies, private households, as well as traffic systems and building technology. They will present the technology at the research stand of the state of Rhineland-Palatinate at Hannover Messe from 24th to 28th April.

Users can conveniently turn on the heating or lights remotely by smartphone, while machines exchange data in an automotive production facility. These are just two examples that show how devices are becoming increasingly interconnected. The Internet of Things (IoT) has been part of our everyday lives for quite some time. “An increasing number of devices have their own network connection and IP address,” says Christopher Heinz, doctoral student under Prof Dr Christoph Grimm, who is head of the design of cyber-physical systems department at the University of Kaiserslautern. The abbreviation ‘IP’ stands for Internet Protocol and represents a unique web address.

In the near future, an array of devices could be interconnected in many households, exchanging data — such as the vacuum cleaner with the coffee machine and refrigerator. “Currently, the devices have to originate from the same manufacturer,” adds Johannes Kölsch, another doctoral student under the professorial chair. “Companies typically offer their own web solutions for this purpose.”

The two computer scientists are working on a software system that aims to connect devices and machines from different manufacturers. “Our technology is similar to the concept of an adapter used to connect differently shaped plugs with electrical sockets abroad,” Kölsch explains. Experts also refer to this as interoperability. This term describes the capability of technical systems from various manufacturers have to communicate with each other and recognise different signals, for instance.

The researchers at the University of Kaiserslautern would like to connect the devices using a software interface. The system is intended to be a simple and user-friendly solution. Special hardware is not necessary. It is conceivable that the technology may be used on network devices already available in private households, for example Internet routers. “The devices would only have to be registered in the system,” Heinz continues. A particular advantage is that the user retains control over who can control and use the appliances. “Users can grant permission to someone else. Data would then be encrypted before being transmitted from sender to recipient according to the latest security standards,” Kölsch says.

This technology is not only of interest to private households. Companies could use it to combine different machines in their production facilities, hospitals could connect important medical equipment in laboratories and treatment rooms, and transport enterprises could link buses and trains to display screens at stations. The distribution systems of large building complexes could also be controlled more easily in this way, including heating, ventilation, air conditioning and lighting. Moreover, the power supplied by renewable energy sources could easily be distributed: this system would allow solar panels to deliver stored electricity directly to appliances when they require power, such as electric cars, in order to recharge.

The research work is taking place as part of the project ‘VICINITY’, which is supported by the European Union to the tune of 7.5 million euros. Professor Grimm coordinates the project in Kaiserslautern. Altogether, 16 European partners are involved in the work. The researchers will present the project at Hannover Messe.