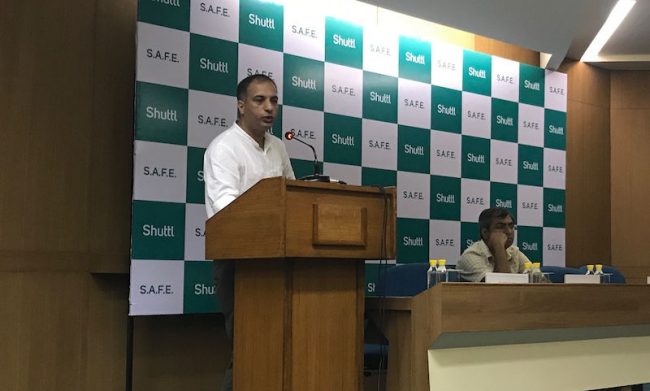 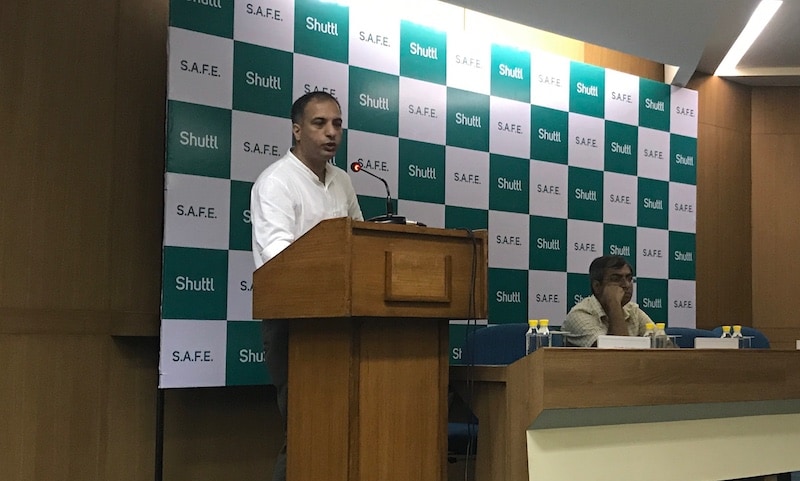 As Uber and Ola continue to grapple with safety issues of their passengers, two-year-old startup Shuttlmay have just figured out a system that’s better suited to tackle this challenge. The bus-sharing service on Tuesday announced a range of safety features that it claims will ensure passengers are safe at all times.

At a media briefing Tuesday, Shuttl announced half a dozen emergency features, which it is immediately rolling out to more than 450 buses that are part of its network. One of the features is called SOS, which the startup says, will allow passengers to ring the alarm. There’s also a physical panic button installed near the front door. Any such actions will begin the process to first slow down the bus and then completely stop it at the nearest bus stop, which is how executives at the company described the feature to Gadgets 360.

Part of the new emergency features is a CCTV live feed, which any passenger can share with their friends and family. The URL link will enable anyone to watch a real-time footage of the commute. The startup, which is operational only in the National Capital Region for now, is also adding an alcohol detector to ensure that drivers haven’t consumed alcohol at any time during the ride. Failure to do so will prevent them from starting the bus, and in case they drink as they drive, the vehicle will shut down at the next bus stop.

Each of these buses will now have the ability to authenticate passengers by looking at their faces. Shuttl app asks you to upload your picture, against which it matches your face. It’s an optional feature for faster check-in, and commuters can also use an audio system called “chirp”. When a passenger enters the bus, he or she can tap on chirp button from within the app, which in turn, transmits a unique audio signal, that the driver’s phone can listen to and authenticate a passenger’s identity.

There’s also an optional “homecheck” feature, which if enabled, will allow the startup to monitor the GPS coordinates of the passenger minutes after they have left the vehicle, to ensure they have reached their homes. If they don’t reach home in time, they will receive a computer-generated phone call to check their whereabouts and well-being.

In a conversation with NDTV Gadgets 360, Amit Singh, a founder of Shuttl said the company plans to continue its expansion – in routes where people show demand – in the National Capital Region. The startup, which currently has over 35,000 monthly active customers and sees about 20,000 of them ride everyday in its air-conditioned, Wi-Fi-enabled buses, will begin to look at other regions in India starting next year.

Most of the security systems that Shuttl has deployed in its buses act locally and don’t require Internet data, an executive with the company told Gadgets 360. Many of these systems are powered by a Raspeberry Pi, a pocket-sized computer that costs under Rs. 2,500.

The startup, which doesn’t hire drivers but screens them, says it has partnered with OnGrid, a company that works with India Stack and leverages Aadhaar infrastructure to authenticate drivers. India Stack, an executive with Shuttl told Gadgets 360, does the home verification of the drivers and also looks at their past police records.

On the sidelines of these launches, the startup also announced Shuttl TV, an infotainment system that allows passengers to choose a movie they would like to watch from a catalogue, and watch it on the screen installed near the door. Passengers will have to plug in their earphones to their own phones for sound.