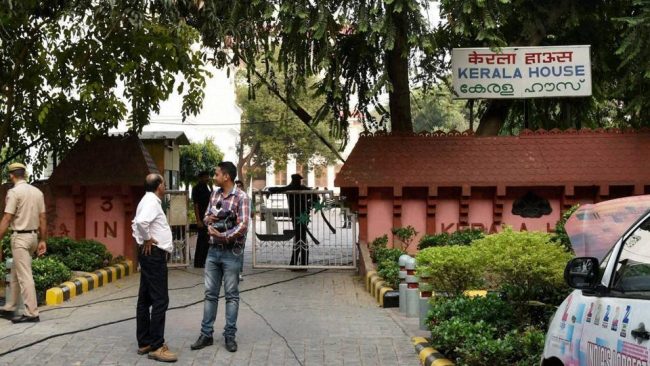 Security at Kerala House on Jantar Mantar road in New Delhi was stepped up following reports of a political party planning a ‘beef festival’ there on Saturday evening.

Delhi Police said they received information from Kerala House officials about the matter and security was stepped up as a precautionary measure.

“We were alerted by Kerala House officials about unverified information they received that some people belonging to a political party were planning to hold a beef festival there at 6.30 pm.

“So we have deployed police force to handle them,” said deputy commissioner of police BK Singh.

Police sources, however, said the information appeared to be a rumour.

There were reports that the Nationalist Congress Party (NCP) had planned a ‘beef festival’ at the Kerala House. Party MP DP Tripathi, however, termed the report as “baseless”.

Last week, a “cow vigilante” group, claiming to belong to the Bharatiya Gauraksha Kranti, allegedly barged into Kerala House to protest the beef festivals recently held in the southern state.

Kerala House resident commissioner Vishwas Mehta had sought more security for the state guest house to protect it from “groups with vested interests”, who could create trouble over the ongoing beef controversy.

Two years ago, Kerala House was mired in a similar controversy after the Delhi Police raided its canteen on receiving a complaint that it served beef.

However, the Kerala government and the canteen authorities denied the charge, saying it was buffalo meat.