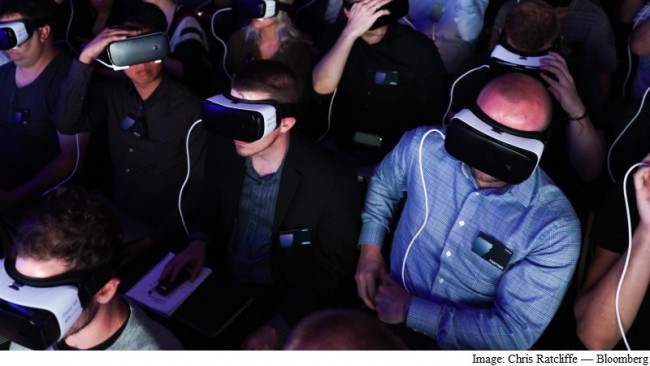 Tom Harding, Samsung’s US director of immersive products and virtual reality, spoke with The Associated Press recently about VR, including efforts to improve interaction and comfort. The transcript has been edited for length and clarity.

Q: How would you characterize the year in VR?

Q: What do you think of competition from other VR headsets, including Google’s upcoming Daydreamsystem?

A: The market is large enough to welcome multiple types of VR experiences. Anything we can do to expand awareness is positive.

Q: Will the lack of a hand-held controller for Samsung’s Gear VR be a problem?

A: Developers are working out the best way to interact in virtual reality. The latest Gear VR headset has a new type of USB connector that will open up a ton of possibilities, including new ways to interact. Everyone’s really experimenting.

Q: How else are you improving the experience?

A: The Oculus home button was delivered based on feedback from users who say, “I don’t want to hold down the back button to get back to the home.” You will also see a lot of refinements based on consumer feedback – for example, comfortable padding, an even wider field of view and even subtle things like the insides being black.

Q: Why do you need a fancy $100 headset when you can get a free or cheap cardboard version?

A: One of the strengths of Gear VR is we’re not leveraging an existing sensor on the phone. The sensor on the Gear VR is a dedicated sensor just for checking in and sampling your head position. It’s been calibrated to virtual reality. We can guarantee that when you move your head, the screen can keep up. Everything will be ultra-smooth.

(Also see: Why You Should Care About Virtual Reality)

Q: How important is giving away headsets as part of promotions as opposed to making money?

A: It’s a new piece of technology. The work we did with promoting is a really great way to bring people to VR and give people a taste of what VR could be. Nothing is quite like trying it for the first time yourself in understanding what VR is.