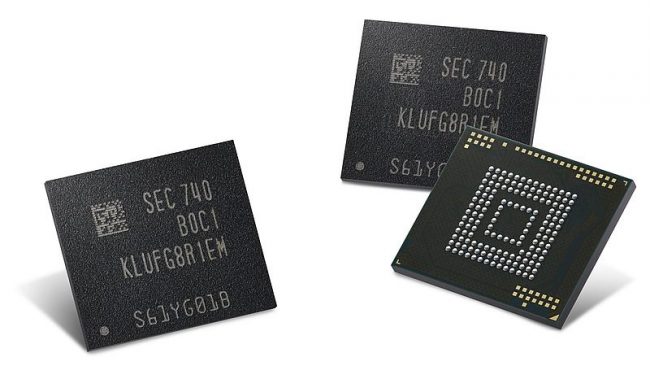 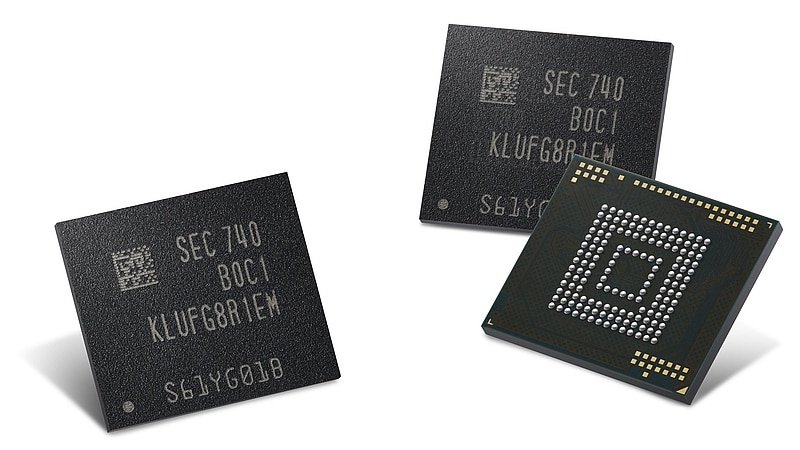 Samsung is looking to take phone storage to the next level with a new 512GB embedded universal flash storage (eUFS) solution, which the South Korean giant has started mass producing, it announced on Tuesday. This move will double the company’s current maximum of 256GB that is available on the Galaxy S8 and Galaxy Note 8. No precise timeline of when these chips can be expected in mobile devices has been disclosed, beyond it being meant for upcoming flagship smartphones and tablets.

Utilising Samsung’s latest 64-layer 512-gigabit V-NAND chips (eight of them), the new 512GB eUFS package provides record storage capacity and faster processing speeds, the company claims. Samsung claims that the new eUFS solution will enable a flagship smartphone to store approximately 130 4K Ultra HD (3840×2160) video clips of a 10-minute duration which is about a tenfold increase over a 64GB eUFS which allows storing about 13 of the same-sized video clips.

“The 64-layer 512Gb V-NAND’s advanced circuit design and new power management technology in the 512GB eUFS’ controller minimize the inevitable increase in energy consumed, which is particularly noteworthy since the new 512GB eUFS solution contains twice the number of cells compared to a 256GB eUFS. In addition, the 512GB eUFS’ controller chip speeds up the mapping process for converting logical block addresses to those of physical blocks,” the company says in its statement.

A boost in overall read and write performance is also expected. Claimed sequential read and write speeds of up to 860 megabytes per second (MBps) and 255MBps respectively mean that bigger, high-resolution files can be transferred in lesser time than before. On random operations, the 512GB eUFS solution can read 42,000 IOPS and write 40,000 IOPS, which is over 400 times faster than a regular microSD card.

Samsung has confirmed nothing about which devices would be getting the new 512GB chips but we can assume that the phone maker’s next flagship phone – Galaxy S9 – will have 512GB internal storage as an option. The Galaxy S9 and S9+ are expected to be previewed at CES 2018 in January. We can also expect a couple of tablets to sport the same chip in 2018. The company added it would expand production of 256Gb V-NAND chips, while it would be aggressive in ramping up the newer 64-layer 512Gb V-NAND chips.