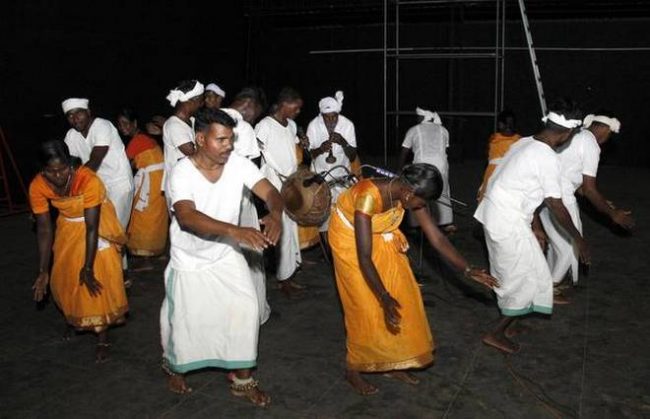 The sun has set and a light breeze has set in. Cue for traders and shopkeepers in Thrissur town to shut shop for the day and head home. People walk about briskly, with determined steps, probably contemplating a nice quiet meal and some TV before turning in for the night.

In sharp contrast, a small restaurant adjoining the lush campus of Kerala Sangeetha Nataka Akademi is buzzing with activity.

Space is being cleared to serve as a staging area, and chairs are being arranged elsewhere. It’s going to be a musical night, a youngster tells me. We are here for the 12th edition of ViBGYOR, an international short and documentary film festival that was begun as a response to the 2002 Gujarat riots. The Akademi is teeming with filmmakers, intellectuals, activists, photographers, journalists and enthusiastic residents.

This year, Irula tribals from Attappadi are performing. As their drumbeats pick up pace and the tinkling sound of the performers’ heavy anklets fill the air, young students and some daily-wage workers join the tribals.

For justice and diversity

These are rare sights and sounds in a town where the lights dim by 8.00 p.m. The theme of the festival this year is vimatham or dissent.

The festival aims to take cinema to villages, where the organisers interact with residents and help them make films.

Each year, the festival is anchored to a social issue such as gender, environment or caste.

Says Benny Benedict, the national coordinator of ViBGYOR, “We decided to settle on a caste and gender-neutral name; one that would stand for cultural diversity.”

The first day begins with the Sarathchandran Memorial Lecture, named after a prolific documentary filmmaker and activist dear to the organisers. Poets Ashok Vajpeyi, Sukirtha Rani, Anitha Thampi, K.R. Tony, P.N. Gopeekrishnan and Anwar Ali constitute the panel. The discourse is largely centred on present-day political issues — gau rakshak vigilantism and targeting of minorities — and ends with a fiery debate on the controversies marring the rule of Kerala’s Left Front government.

The documentaries and short films also take after current themes — the Rohith Vemula suicide and the Kudankulam protests. Documentary filmmaker Divya Bharati of Kakkoos fame speaks at a session on censorship.

She is accompanied by Oorali Martin, a Malayali musician and theatre artiste, who was recently arrested by the Kerala police and accused of being a drug peddler because of his long hair.

“The cultural landscape of Thrissur is defined not just by elite spaces like the Kerala Sahitya Akademi or Sangeetha Nataka Akademi but also by its bars and tea shops, filled with passionate debates on politics and arts. These odd moments in history go unrecorded. But they have contributed to festivals like ViBGYOR,” says filmmaker K. Gopinathan, one of the advisers of the festival.

The festival has always faced opposition from right-wing fringe elements. R.P. Amudhan, director of Shit, an award-winning documentary that dealt with manual scavenging, recalls an incident that happened a few years ago. “A film on Kashmir was being screened when some miscreants stomped into the auditorium. I stopped them from damaging the projector and some audience members also stood up against the goons. They were clearly outnumbered and had no choice but to leave.”

Funding, another problem area, is pretty much hand-to-mouth. Students and volunteers go door-to-door seeking donations and sponsorships. The rest is chipped in by the organisers themselves.

But the sense of camaraderie at the festival every year keeps the organisers going. “There is an urgent need for a space for alternative thought,” says one organiser, as he rushes from one session to the next.