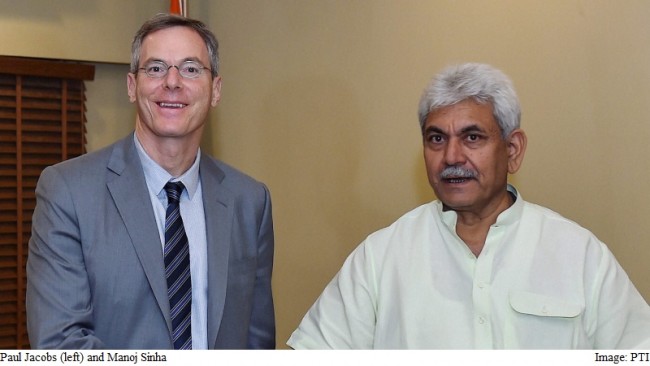 “They really intend to expand their footprint. They have great experience in the field of chip design. They are very excited about expansion of mobile manufacturing in India,” IT and Law Minister Ravi Shankar Prasad told reporters after meeting with Qualcomm Executive Chairman Paul Jacobs.

“I also asked him to explore the possibility of … bring in satellite connectivity in hilly areas of India. He has told me these are very exciting areas and area of his concern,” Prasad said further.

Qualcomm met the IT Minister to discuss a slew of issues around its expansion in India, venture fund and its new global satellite based communications network – OneWeb.

Jacob also met Sinha to discuss OneWeb which the company expects to launch in 2019-20.

“We also spoke about investment in satellite company called OneWeb that is going to build over 700 satellites, launch those by 2019 and 2020. It will provide mobile broadband to most remote areas of the country and will have connectivity from a terminal on ground, up through sky into the rest of the network,” Jacobs said after meeting Sinha.

Qualcomm’s OneWeb communications network will be made of low-earth-orbit (LEO) satellite constellation made up of hundreds of satellites, orbiting at approximately 1,200 kilometers and working in coordination to create the world’s largest coverage footprint. Unlike existing Geosynchronous (GEO) satellite solutions, which orbit at approximately 36,000 kilometres, the OneWeb satellite constellation will be closer to the earth to reduce response time to and from satellites.

“It will have cellular and Wi-Fi connectivity so people will be able to use phones and tablets to get access to Internet to get connectivity that way. We want to do that with schools for education purposes, with hospitals, put them in rural communities to give connectivity,” Jacobs said.

He also said that the company is foreseeing development of mobile ecosystem in the country not just assembling but also designing and manufacturing of devices.

“That will then create whole ecosystem for all components that need to go in mobile phones. We see that building up over the time with right incentives so we get into advance manufacturing of semiconductor chips. We have seen this happening in other countries and we see India is really set up to this as well,” Jacobs said.

When asked about its status to start production of chipset in India, he said that Qualcomm has had initial discussion with manufacturers of chips but not reached to the stage where production details can be firmed up.

Qualcomm designs chipsets on its own but get them produced from semiconductor plants of its partners.