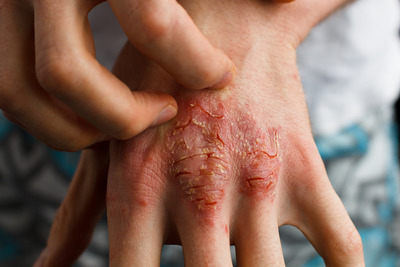 A long-lasting autoimmune disease that develops patches on the skin is referred to as Psoriasis. These patches are characterised by red spots and itchiness. Psoriasis may affect a few parts of the body and in some cases the whole body. It should be noted that Psoriasis is not contagious.

The main reason of Psoriasis is not known but it is the result of various factors, including environmental factors, genetics and poor immune system. Mainly, Psoriasis is classified into five categories: plaque, guttate, inverse, erythrodermic and pustular. Nearly ninety per cent of people who are affected by Psoriasis has Plaque psoriasis, also known as Psoriasis vulgaris. This develops red patches with white scales on it. Psoriasis mainly affects forearm, scalp, shins, and navel area. It is believed that Psoriasis is a genetic disease and gets triggered by the environmental factors.

A study shows that the chances of Psoriasis are more in identical twins than those of non-identical twins. The symptoms of Psoriasis often get worse in winter. Unfortunately, there is no cure for this skin disease. However, various treatments can control the symptoms of Psoriasis. Also, factors like stress, smoking, excessive consumption of alcohol, skin infections, strep throat, certain medications such as medication for bipolar disorder, high blood pressure medication like beta-blockers, iodides, injury to the skin like bug bite, cut and scrape may trigger Psoriasis.

Psoriasis impacts patient’s lifestyle to a great extent. A person affected with Psoriasis may feel low on self-esteem, depressed and more often isolates himself/herself. Consult your physician if you experience any symptom of Psoriasis. Early diagnose may prevent it from spreading in other parts of the body with effective medication and treatment.

1. While there are ongoing researches to find the real cause of Psoriasis, it is believed that a weak immune system could be responsible for the problem, wherein T cells that fight infection in human bodies mistakenly attack healthy cells leading to the disease.

2. Family history also plays a significant role. People with one parent suffering from Psoriasis are more likely to be affected by the disease. Moreover, people who have viral or bacterial infections like HIV are also more prone to the disease. 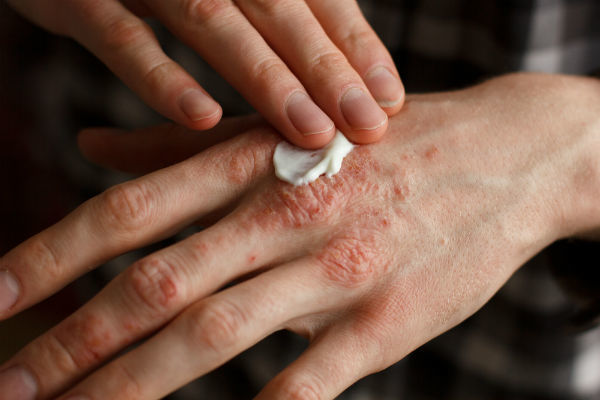 3. Factors like stress, alcohol consumption, obesity are also seen as factors abetting the problem. Anything that impacts human immune system can be counted as a risk inducing factor for psoriasis.

The main problem with this skin disorder is the fact that its symptoms keep appearing and disappear from time to time. The treatment of the disorder is focused on stopping abnormal cell growth.

Psoriasis symptoms can differ in individuals, however, general symptoms may include the following:
1. Cracked and dry skin
2. Bleeding from the cracks
3. Frequents itching in the skin
4. Swollen joints and joint pain
5. Silvery scales in red skin patches

1. Use moisturising lotions – Psoriasis symptoms get worse if the skin gets dry so keeping it thoroughly moisturised is important. Petroleum jelly is believed to work best.

2. Be careful with skin and scalp – Picking at dried scales may make it worse. If you cut yourself while trimming nails, it can make flare up the symptoms. Regular bathing with prescribed products also help the condition under control.

3. Avoid extreme weathers – Too much sun or too cold or dry weather lead to skin flare ups.

5. Say no to tobacco- Tobacco consumption in any form can make Psoriasis worse. Stop smoking or chewing tobacco for better prevention.

6. Consult your doctor and see what triggers flare ups. It could be some medicine or any food. Avoid it at any cost.