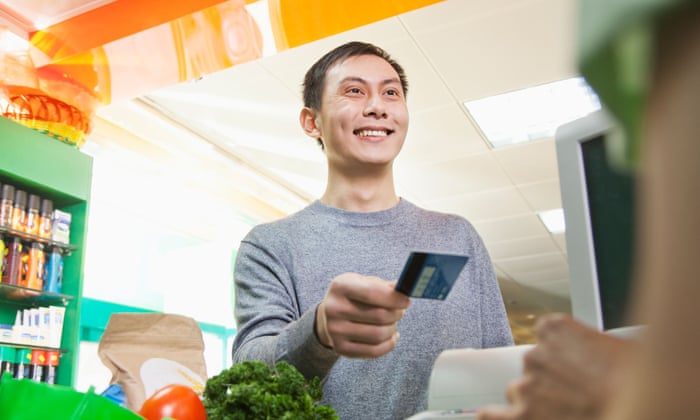 While the number of people on high-productivity North Sea oil and gas rigs has gone down, the number employed by supermarkets on home deliveries has gone up. Photograph: Blend Images/Alamy

Britain’s economy has moved sideways over the past decade. That’s the main message from the latest set of official figures for productivity which, once again, are dismal.

It is not just that the performance in the first three months of 2017 was poor. The 0.5% quarterly drop in output per hour worked meant productivity fell back below where it was in the last quarter of 2007, the period immediately before the economy nosedived into recession.

Such a long period without any productivity growth is unprecedented in modern times. Normally what happens is that productivity falls in the early stage of a recession but then bounces back and returns to its pre-slump trend. That, though, hasn’t happened since 2007, with profound consequences for living standards.

Rising productivity means that a society is finding new and better ways of providing goods and services. Broadly speaking, more is produced with less effort. Societies have the choice of consuming more or having more leisure time. Usually, they opt for a bit of both.

The Office for National Statistics says that, had productivity in the UK returned to its pre-recession trend, it would be 20% higher than its current level. Britain would be one fifth better off.

It is easier to explain what has happened than why it has happened. Economic output fell sharply during the recession of 2008-09 and subsequently recovered modestly so that it is some 8% higher than its previous peak. But the number of people employed has also been going up, so the amount produced per worker per hour has remained unchanged.

Governments have also used a carrot-and-stick approach to get the jobless back to work. They have tightened up eligibility for unemployed benefits while simultaneously providing tax credits to boost low wages. This, together with a big increase in migration, has increased the supply of low-skill labour, much of which has ended up doing low-productivity tasks.

Businesses are in a strong financial position. The rate of return on capital is the highest it has been since the boom years of the late 1980s. This would normally be the cue for firms to spend more on innovation and new machines, both of which would lead to higher productivity.

But, with labour so plentiful and the outlook murky, it is less risky for firms to respond to any pickup in demand by hiring some cheap workers rather than by investing in some new kit. But until investment does pick up, the UK will be stuck in a low-productivity trap.