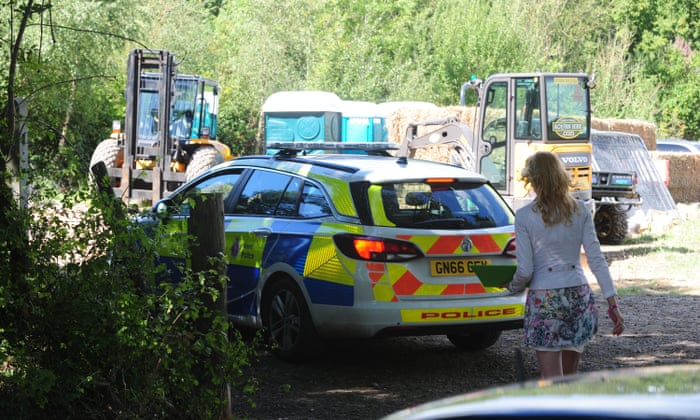 Emergency services were called to one of the Flamefest campsites at 6am on Tuesday after reports of two people being found unconscious. Photograph: Grant Falvey/LNP

Police are investigating an unexplained death at a “kinky rave festival” in Kent.

A man, in his 50s, was pronounced dead on Tuesday morning after Flamefest in Tunbridge Wells over the weekend. A woman was also taken to hospital after being found unconscious, Kent police said.

Flamefest, which is in its second year, boasts a “discreet” adult play area staffed by dominatrices and an outdoor dungeon.

Hundreds of revellers were expected at this year’s event, which was held in Brokes Wood and featured DJs, live music and entertainment. Tickets cost up to £600.

Organiser Helen Smedley created the festival “to bring together the purest, most hedonistic elements of the party scene”, according to its website.

A police spokesman said: “Kent police is making inquiries to establish the circumstances surrounding an unexplained death in Tunbridge Wells. Officers were called by South East Coast ambulance service at 6.14am on Tuesday 22 August 2017 to a medical incident at a campsite in Powder Mill Lane, Tunbridge Wells.

“Patrols and ambulance crews went to the scene where a man was pronounced dead. The death is being treated as unexplained at this stage. In addition, an unconscious woman received medical treatment and was taken to a local hospital by air ambulance.”

A spokesman for South East Coast ambulance service said: “the trust was called at 6am today following reports of two people found unconscious. We sent a number of resources to the scene including specialists critical care paramedics, Hart and Hems (air ambulance).

“Efforts to revive a man in his 50s were unsuccessful and he was pronounced dead at the scene. A woman was flown to Tunbridge Wells hospital at Pembury for further treatment.”

The event had sparked concern among residents. Last week, Dianne Hill, a councillor who represents the Southborough and High Brooms ward, said she had received many complaints.

Before the festival, which ran from Friday to Sunday, Smedley wrote on Facebook: “We have hired in extra security because of the extended coverage of Flamefest.

“I had a meeting with a police officer yesterday to discuss the situation, and have agreed a management strategy to deal with potential gatecrashers to the event. We’ll be monitoring the situation with the police, who have offered support to this licensed event.”

On Tuesday, Smedley declined to comment on the unexplained death.