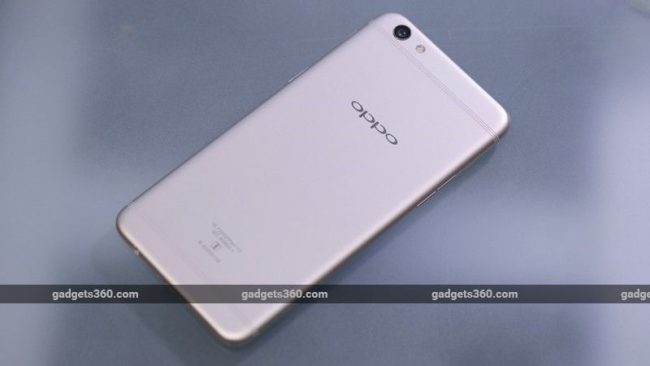 HIGHLIGHTS
The new price is said to be effective from Thursday
The phone was launched back in March
The dual selfie camera setup is the highlight feature on phone
Oppo F3 Plus, which was launched in India earlier this year, has reportedly got a price cut for the country. While the smartphone was initially launched by the company at Rs. 30,990, it will reportedly be available at Rs. 27,990 from Thursday onwards.

Mumbai-based well-known retailer Mahesh Telecom announced through a Facebook post on Thursday that the Oppo F3 Plus will now be available at a discounted price in India, effective from Thursday itself. We’ve reached out to the company for confirmation, and will let you know once we hear back.

To recall, the Oppo F3 Plus went on sale in India in April, and the biggest highlight of the smartphone is its dual selfie camera setup. It comes with one 16-megapixel 1/3.1-inch sensor with an f/2.0 aperture and one 8-megapixel sensor. While the former sports a 76.4-degree wide-angle lens, the latter sports a 120-degree wide-angle lens that allows for 105-degree field-of-view group selfies. Users can choose which lens they want to use, and, the smartphone comes with a Smart Facial Recognition feature that Oppo says automatically suggests which lens is ideal. The smartphone comes with various camera features, including the Beautify 4.0 app, Selfie Panorama, Screen Flash, and Palm Shutter.
The Oppo F3 Plus also bears a fingerprint sensor on the home button, said to unlock the smartphone in as little as 0.2 seconds. The company is touting fingerprint activated app and call shortcuts as well. The dual-SIM (Nano-SIM) Oppo F3 Plus runs ColorOS 3.0 based on Android 6.0 Marshmallow. It bears a 6-inch full-HD (1080×1920 pixels) JDI In-Cell 2.5D curved display with Corning Gorilla Glass 5 protection. It is powered by a 1.95GHz octa-core Qualcomm Snapdragon 653 SoC that’s coupled with the Adreno 510 GPU and 4GB of RAM.

Connectivity options on board the Oppo F3 Plus include 4G VoLTE, Wi-Fi 802.11 a/b/g/n/ac (2.4GHz and 5GHz), Bluetooth v4.1, GPS/ A-GPS, 3.5mm audio jack, and Micro-USB with OTG. It is powered by a 4000mAh battery with the company’s own VOOC Flash Charge fast charging tech that is claimed to deliver up to 2 hours of talk time in 5 minutes of charging. Sensors on the smartphone include accelerometer, ambient light sensor, gyroscope, magnetometer, and proximity sensor. It measures 163.63×80.8×7.35mm, and weighs 185 grams.