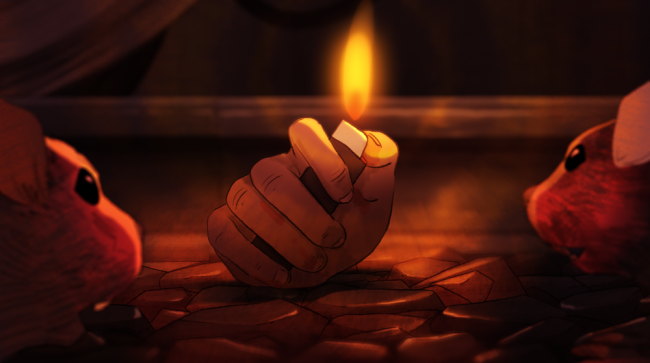 ANNECY, France  — Fulfilling expectations, Jeremy Clapin’s “I Lost My Body, the subject of one of the highest-profile Netflix deals at this year’s Cannes, won this Saturday the Annecy Festival’s top Cristal Award of best feature plus, in a relatively rare Annecy double whammy, the festival’s Audience Award.

The first was expected, the second a sign of the broad appeal of a movie whose premise – a severed hand desperately attempting to be reunited with its body – seems a highly unlikely point of departure for a movie of any kind.

Hailed as a masterpiece by many critics “I Lost My Body” was described by Peter Debruge in his Variety review as “one of the strangest ideas ever committed to animation — a severed hand seeks answers,” which “ultimately proves to be one of the medium’s most profound offerings.”

With a 2019 Annecy jury mention going to Salvador Simó’s “Buñuel in the Labyrinth of Tortoises” — a Gkids pickup for North America — the true-events story of Luis Buñuel’s shooting 1933’s “Land Without Bread,” whose very animated documentary format serves to give the whole film a near surreal tinge, Annecy’s 2019 major kudos can be seen to celebrate the sheer inventiveness of current animation.

They also highlighted up and coming talent such as 25-year-old Latvian Gints Zilbalodis, whose “Away” won the new Annecy selection Contrechamp, dedicated to emerging talent from around the world. A beautifully animated mood piece-cum-road trip in which a young man parachutes into an island, motorbikes across barren deserts, lagoons and forests, pursued by a malignant spirit, “Away,” on which Cinema Management Group had been tapped to push out pre-sales before its Annecy bow, can be read as being a sort of “reflection of the creative process of making the film itself,” Zilbalodis has said.

The Annecy Cristal for best short, a category of arguably greater importance in animation than live action, went to Breton Bruno Collet’s “Memorable,” which lived up to its name.

In the France Télévisions-produced short, made with Breton regional TV, a talented painter pushes back against Alzheimer’s until he can remember two things, his art and the love of his life. Taking in a huge sweep of modern art — ranging from Van Gogh, Giacometti, Kokoschka to Baselitz — as his memory degenerates toward the anomie of abstract art, “Memorable” is tender, beautifully scored and produced by Vivement Lundi.

One of the most intriguing Annecy competitions this year looks to have been the TV section, which featured episodes of Disney Channel’s “101 Dalmatian Street,” DreamWorks TV Animation’s “Kung Fu Panda: The Paws of Destiny,” Netflix’s “Dino Girl Gauko” (well-liked at Annecy) and Magic Light Pictures’ huge BBCOne Christmas hit “Zog.” The eventual winner, however, was “The County Fair,” an episode of “Panic in the Village,” a long-running stop-motion comedy farce from celebrated Belgian directors Vincent Patar and Stéphane Aubier.

The flood of prizes for shorts, still one of Annecy’s biggest attractions, served to distinguish some of the standouts.

Backed by France’s Les Armateurs (“The Swallows of Kabul”), the exquisitely drawn and affecting “Uncle Thomas: Accounting for the Days” won a jury award among Annecy shorts. It pays tribute in sharp black-pencil — with an occasional detail, such as a rose or pencil, rendered in red — to director Regina Pessoa’s uncle, who lived opposite, a dandy who owned a motorbike, and taught her to draw.

A 3D-animated short with a stop-motion aesthetic which won a jury mention for storytelling, “Drive” envisions the violent life of a child after the death of his mother. From director Pedro Casavecchia, the short is an Argentina-France co-production.

Scooping a jury mention for social significance, “My Generation” is the latest from Academy Award-winning director Ludovic Houplain (“Logorama”). It features a reverse shot from a vehicle speeding down a six-lane highway away from a big metropolis of theme-park brands — art, religions, Wall Street, sex parlors — as the soundtrack samples rants by Adolf Hitler, to end on the sanity of Bertrand Russell’s dictum: “Love is wise, hatred is foolish.”

Among the special prizes announced on Friday, maybe the most important, the Gan Foundation Award for Distribution, went to Aurel’s “Josep,” a portrait of illustrator, soldier, concentration camp detainee and Hollywood stage designer Josep Bartoli.

CRISTAL FOR A FEATURE FILM

“Buñuel in the Labyrinth of the Turtles,” (Salvador Simo, Spain, Netherlands)

CRISTAL FOR A SHORT FILM

CRISTAL FOR A TV PRODUCTION

JURY AWARD FOR A TV SERIES

JURY AWARD FOR A TV SPECIAL

CRISTAL FOR A COMMISIONED FILM

CRISTAL FOR A GRADUATION FILM