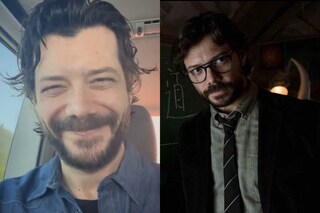 Money Heist season 5 is the final installment of the Netflix’s series, also known as La Casa de Papel. As the shooting of the show is in its final days, the actors are bidding adieu penning heartfelt emotions on social media. Actor Alvaro Morte, famous for portraying the leading role of Sergio Marquina aka The Professor, in the show has recently left fans emotional with his Instagram post.

In the recent post, the actor was seen sitting in a car bidding farewell to the sets of the show. Rightly captioning it ‘words are unnecessary’ the actor expressed his agony without saying a word. His emotions were on display when he took a round around the building for the last time.

Sharing the video on Instagram, Alvaro wrote, “Leaving for the last time the set of La Casa de Papel.” Taking the opportunity, he shared his heartfelt feelings for the team and fans. He thanked the entire team of the show and the OTT platform Netflix. He gave a special mention to his character, The Professor. “And to you, my dear Professor. I will miss having such a good time with you. THANK YOU,” he added.

The post was soon flooded with reactions from both celebs and fans alike. While some said the post has left them overwhelmed, others including Money Heist co-stars Itziar Ituño, Esther Acebo and Najwa Nimri dropped high-five and heart emoticons.

Alvaro plays the character of The Professor, a mastermind in the Spanish thriller who brings together a bunch of other criminals and plans heists. The character is very close to the actor as he had said that he had studied his character in depth to make it interesting.

In earlier interviews, the actor had said, “I love to study my characters. For The Professor, I inspired myself from the superhero universe.”

When asked about how the show has changed his life, the actor revealed it is a mixed bag. “On a professional level, it has changed many things. I have many projects on the table right now thanks to the show.” “But on a personal level, it has been difficult as I feel I have lost my anonymity,” he added. He concluded that now that he and his family are always observed, he finds it difficult to protect his family, although he tries as much as possible.