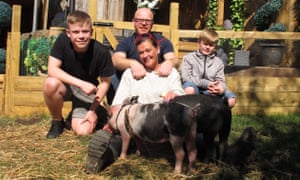 Idisavowed pork last year after visiting a pig farm and petting a few of the small animals there, deciding that, though they produce a wacky quantity of excrement, pigs are basically just big, thick dogs, and as such I can live for a while without bacon. Do we want to mention the week in Italy I spent this summer chain-eating slices of mortadella from back-to-back deli meat platters? We do not. We do not want to mention that, nor the life-alteringly good Cuban sandwich I had in Miami. Or that actual sausage roll I had when Greggs ran out of vegan sausage rolls when I went there on a hangover. That was actually three sausage rolls, because it was a big hangover. But the point remains: on the whole, pork, no thanks.

It is a complicated thing, the ambient guilt of being a meat-eater, and Channel 4 knows this, which is why it commissioned Meat the Family (Wednesday, 9pm) to make me feel … something, at least. It sees incredibly normal British families – you know the type: families who hoover the house once a day and have semi-expensive garden furniture and two kids – welcome a farm animal into their homes for three weeks, where they will feed them and care for them and give them names. At the end of the three weeks, they are given a choice: release their new pet back into the food chain, where they will be processed by a farm and given back to them as meat; or disavow meat more convincingly than I ever have and save their new animals from the doom of the slaughter. The results are mixed.

The whole thing is fascinating. Firstly: for some reason, the reaction of every dad in every household is to immediately go and eat the animal they just put in their garden (one puts a pork roast in the oven in clear sight of his two new pigs; another, confronted with a garden full of chickens, instantly pops out for a Nando’s). Secondly: any child around the age of 11 can be convinced not to eat an animal by first Googling how intelligent they are. We see families make trips to Germany to meet an intelligent pig, we see a Dutch chicken farm and the sterile reality of mass production. We see, one by one, the faces of people who have been thoughtlessly eating meat all their life clunk together a connection: that the animal they have in their garden is the filling they eat in their sandwich. Meat the Family gently reinforces what we know already: it really is quite easy to eat meat if you literally never think about where it comes from.

This might have resulted in something heavy-handed and preachy, which MTF remarkably isn’t; it’s not scolding, it never tells you to stop eating meat, it just reminds you that a lot of animals have legs and heads before you eat them and can be quite cute, and oh yeah, did you know the UK consumes 2.2 million chickens a day?

Documentaries about the reality of the food chain often feel a bit like having your eyes pinned open and pointed at harrowing footage of an abattoir, and they have their uses, but Meat the Family manages something different: packaging a quiet ethical consumption message up in the cosy familiarity of primetime TV. It’s a worthwhile exercise, even if it doesn’t cause you to embark upon a doomed attempt to stop eating chorizo.