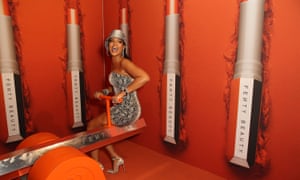 In 2019, if women want to earn big bucks, fashion and beauty is the way to do it. Forbes has released its fifth annual list of the US’s richest so-called “self-made women”. Of the 80 women on it, 10 are from the makeup and skincare industries. Those who have reached millionaire and billionaire status through their own beauty brands and fashion lines include Kylie Jenner, Anastasia Soare of Anastasia Beverly Hills, the Gap co-founder Doris Fisher, Forever 21’s Jin Sook Chang and the creator of Spanx, Sara Blakely.

Rihanna, bolstered by her Fenty Beauty brand, has become the world’s richest musician – despite not having released any music since 2016. Fenty Beauty, which she launched in 2017 with the luxury goods group LVMH, generated an estimated $570 million in revenue last year.

I am conflicted about the list. I literally yelped with excitement at the announcement that Fenty would be stocked in Boots. But I also believe that a society that focuses on women’s appearance is inherently sexist. I don’t believe that more millionaires existing in the world is something to celebrate – but I would be lying if I said I am not pleased that the Forbes list has expanded to 80 women, a third more than a year ago.

There is also some relief in knowing that women are beginning to dominate the beauty and fashion industries – two behemoths that have created and capitalised on women’s insecurities for years. The positive changes introduced by Fenty in terms of addressing the cosmetics industry’s lack of diversity – 40 shades of foundation that cover the full spectrum of women’s skintones, for example – was informed by Rihanna’s identity as a black woman.

There is something to be said about women making money from industries that have sold ideals to them, like the humble Avon lady. I’d certainly stop short of describing it as “taking back control”, but the venom aimed at Instagram influencers is partly down to the fact that so many women have been able to monetise an ideal of the lives they are supposed to have.

Influencers are one of the few industries with a reverse pay gap – a woman with 100,000 followers can reportedly make nearly £10,000 more than a man from two sponsored posts. By capitalising on this, women such as Huda Kattan, Kylie Jenner and Kim Kardashian have all been able to find success within the beauty industry.

It is perhaps also of note that many of the 80 women included in this year’s list started their companies with their husbands, but the majority of makeup moguls have been able to go it alone. In an ideal world, it would not necessarily be deemed a positive to be motivated by money, but in this one, money still equals power.