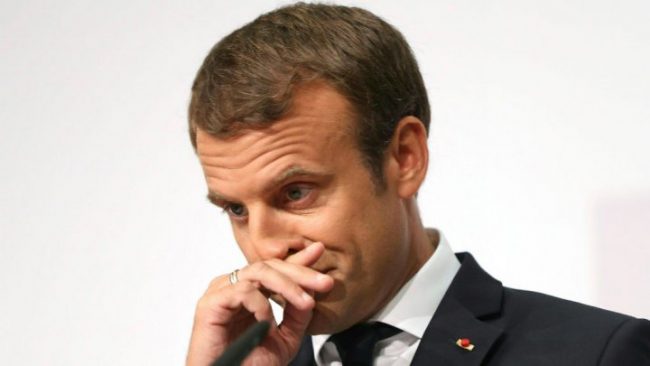 During a press conference with Austrian Chancellor Christian Kern in Salzburg, Macron took the highly unusual step of talking about national politics, breaking his own rule about not discussing domestic politics with the press when abroad.

“What is your unemployment rate, Christian?,” Macron asked Kern in front of the cameras. “5.4 [percent],” replied Kern. “Austria has nearly half the unemployment we do,” Macron observed, referring to France’s 9.6 percent jobless rate.

“The reality is that France is the only large economy that hasn’t beaten mass unemployment,” Macron continued. “Our problem is the fact that the job market in France doesn’t work well.”

Some analysts say that Macron may be adopting a more open, even spontaneous, communication style.

“What’s new is that, in the past, he sought to remain distant. He never replied to interview questions unless he wanted to, or to the remarks of other politicians,” Thomas Guénolé, a political analyst and lecturer in geopolitics at Paris-Est-Crétail University, told FRANCE 24. “In this case, he reacted to something. The question is: Is this a long-lasting change or just a one-off?”

Macron commented again on France’s domestic situation at a press conference in Romania the following day, saying: “France isn’t a reformable country, it’s a country that hates reforms. We need to propose deep changes to allow it to show true European leadership.”

For Eddy Fougier, an associate researcher at the French Institute for International and Strategic Affairs in Paris, Macron’s choice of words was careless.

“Macron said the country wasn’t reformable – but if you want to reform a country or a company, you don’t start by saying that it can’t change,” Fougier told FRANCE 24. “I don’t understand the message. In terms of communication, it’s very strange.”

Macron’s decision to engage more with journalists differs from his stance at the start of his presidency, when his team imposed restrictions on which journalists could travel and meet with him.

“The president doesn’t seem so brusque when he talks to journalists anymore. But if he talks like he did yesterday [about France being beyond reform], it will still be difficult for him,” warned Fougier.

Criticism from other politicians

Macron’s shift in communication strategy comes as he faces increasing criticism from other politicians, including from former French president François Hollande, who slammed his successor’s austerity measures on Monday.

“One mustn’t ask the French to make sacrifices that aren’t useful,” Hollande told BFM TV at a film festival in Angoulême in southwest France. The former president, under whom Macron served as economy minister, was alluding to Macron’s push to reform France’s controversial labour code. “The labour market mustn’t be made more flexible than what we have already,” Hollande added.

>> French labour law reform: The mother of all battles for Macron

Until now, Hollande had granted his former protégé something of a grace period, and his comments marked the first time he expressed his disapproval of a potential shake-up of France’s labour law.

François Bayrou – president of the MoDem (Democratic Movement) party, who was briefly Macron’s justice minister before resigning in June – said in an interview with French magazine Le Pointpublished on Wednesday that the public “doesn’t clearly see the direction, the goal that’s been set [by Macron]”.

Alain Juppé, mayor of Bordeaux and a former prime minister, has also laid into Macron by describing his style as being too vague, French daily Le Monde reported last week.

These criticisms cannot have left Macron indifferent, Fougier believes. “The fact that François Bayrou, François Hollande and Alain Juppé – who were all close to Macron – have spoken out must have been a wake-up call,” he said.

Macron’s former aloofness was ridiculed by the media in July, when he cancelled the traditional Bastille Day press conference on the grounds that his ideas were too “complex” for a normal question-and-answer session with journalists.

Over the summer, Macron has seen his popularity plummet from 64 percent when he took office in May to 36 percent in August. The only French president to have seen his popularity fall more than that in his first three months is Jacques Chirac in 1995, according to French newspaper Le Journal du Dimanche.

The slump in ratings has been attributed to the proposed cuts in housing benefits, the military and women’s associations, as well as the controversial reform of the labour code – which Macron hopes to pass through presidential decree in the coming months.

The president seems to have understood that for his popularity to improve, he needs to better communicate the positive aspects of his policies and vision to the public.

His first major policy challenge will be reforming the labour code. Another test facing his government will be pushing through the 2018 budget.

“The main messages of his presidency, so far, have been about financial austerity, and not giveaways like we often expect in France after an election,” said Fougier. “It’s been bad news, like the APL housing benefit cut. He needs to find a balance between asking the French to tighten their belts and offering benefits to them in return, such as Prime Minister Edouard Philippe’s promise to lower social security charges on salaries. Otherwise discontent will set in.”

According to Le Monde, Macron intends to engage once or twice a month “directly with the French [public]”, although it might not be with Facebook Live – which he used during his election campaign.

“It’s no longer about photos in the press with [First Lady] Brigitte Macron,” said Fougier. “Macron’s MPs, three-quarters of which have never been elected before, also need training on how parliament works and how to argue their policy positions more coherently.”