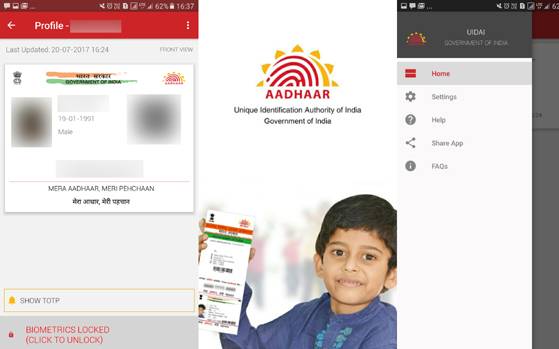 UIDAI has launched the mAadhaar application for Android based smartphones. The app allows you to store details such as the name, date of birth, gender, address etc which are linked to your Aadhaar number right on your smartphone thus saving you the trouble of having to carry the card on your person all the time.

The app also comes with a biometric authentication locking and unlocking system. The app description explains this feature as follows – ” Once resident enables Biometric Locking system their biometric remains locked till the Aadhaar Holder chose to either Unlock it (which is temporary) or Disable the Locking system.”

There are a few conditions for the app to work. You have to make sure that the phone number on your smartphone is the same one that is linked to your Aadhaar card. When you first open the app, you have to create a password, which has to be between 8-16 characters in length and have a special character, a capital letter and a number.

Considering the fact that something so crucial like your Aadhaar number which contains your personal information is stored on the app, UIDAI could have done more on the authentication front. With fingerprint sensors in smartphones so widespread these days, fingerprint authentication should have been an option. Also two-factor authentication could make made things much more secure. 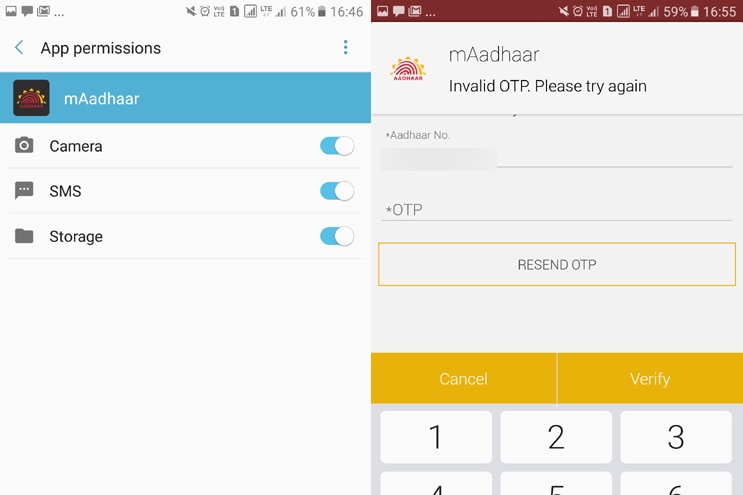 After creating a password, you have to enter you Aadhaar number either manually or by scanning the QR code on the card. Then the app send an OTP. This is where we encountered our first major set of bugs. First of all after entering the number, the app simply refused to go ahead many times with the error message ‘server not responding’ being displayed .

Additionally, to make sure that you do not put any other person’s Aadhaar card, the app does not allow you to enter the verification OTP manually. You have to give the app SMS permissions. It automatically accesses the OTP as and when the message is received.

While UIDAI should be commended for implementing this feature as it helps prevent misuse of Aadhaar data, the actual implementation is very buggy. There is no clear indication in the app that there is no way to enter the OTP manually. The first time around we haplessly tried entering the OTP manually with no success. If you deny the SMS permission, the app will basically become unusable. Many times, the app even rejected the OTP that it automatically accessed from the inbox.

Thus, it took a lot of time before the app finally accepted the OTP and created our profile.  After this we decided to try the biometric lock feature. This is where we encountered the biggest delays. The app is just too slow and buggy at the moment. We had to request and wait for the app to read the OTP four times before the server finally decided to respond and process the request.

Right now, not only is the app buggy and sluggish but has a very limited use case scenario. It can only be used for authentication. Also you cannot store your family’s Aadhaar numbers on the app but this is most likely a security precaution.

Right now, not only is the app buggy and sluggish but has a very limited use case scenario. It can only be used for authentication. Also you cannot store your family’s Aadhaar numbers on the app but this is most likely a security precaution and is actually a good thing.

Taking a picture of your Aadhaar card would be a much simpler and less cumbersome way of keeping a local copy on your smartphone. In fact, if you take a clear and bright photo, the QR code would also be readable. If you do download the app, please make sure you download the official app from the store as there are plenty of clones out there and set a very strong password.