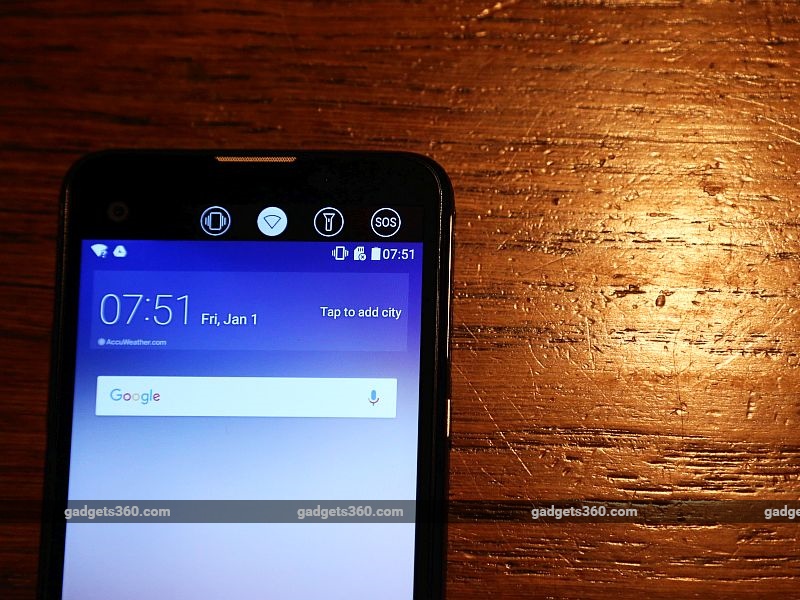 There is no doubt that several budget as well as mid-range smartphones launched recently in India have featured top-notch components at competitive prices. Unfortunately for handset manufacturers, the real fight in the market has been all about cutting costs and reducing prices. This also means that not many companies are actually working on bringing new innovations to smartphones beyond a certain price bracket. However, LG’s latest X screen smartphone has entered the Indian market, and offers a unique new feature – a secondary display that’s always on.

At a recent launch event, we got some time to play with the new LG X screen, and here are our first impressions. The device will be available in Black, White, Pink, and Gold, and we spent time with a Black unit. The new LG X screen features not just one but two displays on its front. The highlight of the device is its second, always-on screen.

The first thing that struck us when we held the LG X screen in our hand was how light it is. At just 120 grams, the X screen feels very light compared to other smartphones in its segment. The LG X screen with its 4.93-inch main display also breaks the current trend in the industry with pretty much all phones featuring screens larger than 5 inches. The main TFT LCD display features a HD resolution of 720×1280 pixels. The HD display was vibrant and had decent clarity, and reproduced bright colours.

The X screen features a secondary display measuring just 1.76 inches, with a resolution of 80×520 pixels. Unlike other phones whose main displays can stay on all the time, having this small secondary screen results in lower battery consumption. The second screen is placed above the main display and is slightly off-centre to the right side.The best part about the second screen on the X screen is it is easily accessible thanks to its size and placement. The phone has four assigned Quick Tools for sound profiles (general, silent, or vibration), Wi-Fi, flashlight, and SOS. 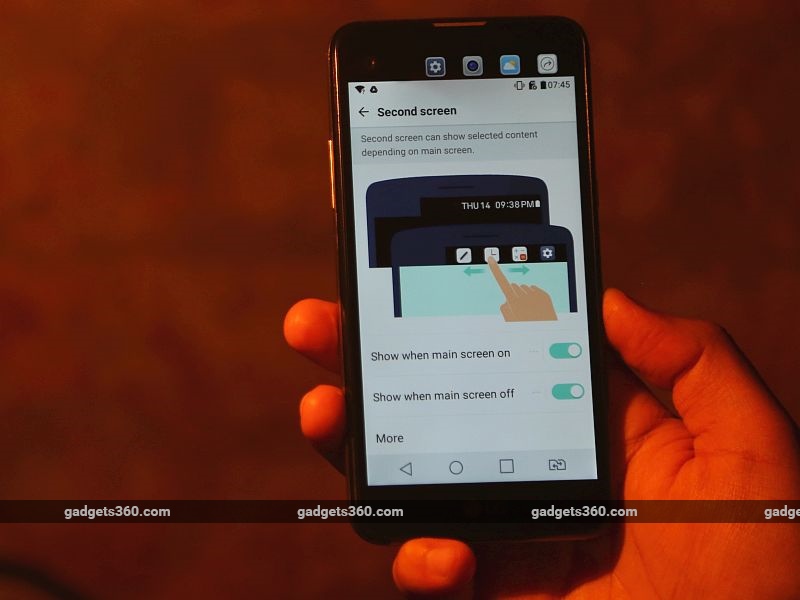 LG at the launch touted the X screen to be the first smartphone in the country to launch with an SOS feature. We already know that smartphones from next year will have to include the feature (called Panic Button) as per a DoT (Department of Telecommunications) ruling. The SOS feature on the LG X screen can be accessed via the second screen anytime, or by rapidly pressing the power button five times. According to LG, the SOS mode will basically send alerts to a user’s assigned emergency contacts right away. Unfortunately, we were unable to test this feature on the phone as it required a working SIM card.

In the limited time we were able to spend with the LG X screen, we think that its second screen is a very handy feature that can save users time and effort. Additionally, the Always-on second screen can display your name or any other text. An LG executive at the launch event told us that the X screen is designed to minimise interruptions, which means it will show notifications for apps and calls without disturbing the current activity on the main screen, for example texting, playing games, or watching videos. 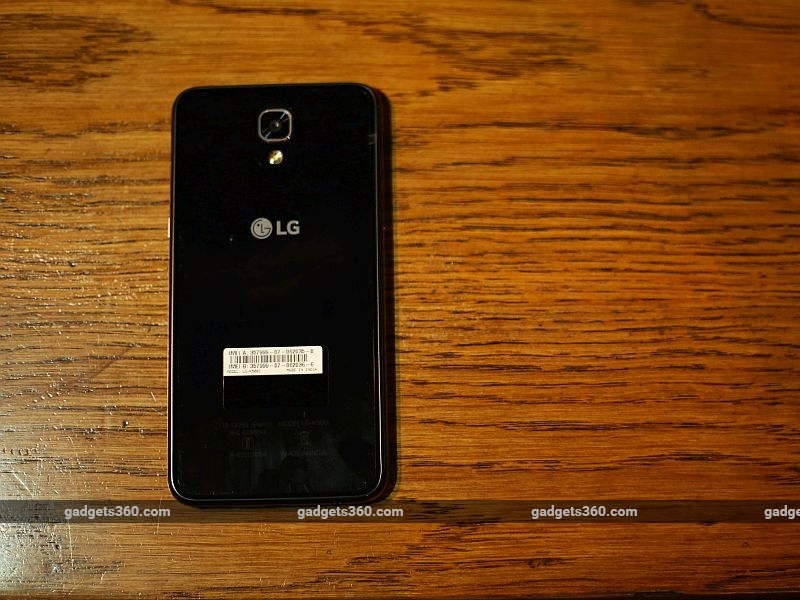 The rear of the handset is made of glass, and at first we were reminded of the LG Nexus 4, except that the LG X screen features plain glass while the Nexus 4 had a glossy design underneath. The right of the handset features its power button and hybrid SIM slot. Users can either use two Nano-SIMs at the same time or one Nano-SIM and a microSD card for storage expansion. The left just has the volume buttons. The bottom features the 3.5mm audio jack, charging port, and a speaker grille.

This phone comes with the company’s custom skin running on top of Android 6.0 Marshmallow. We found the interface of the LG X screen simple and easy, and we had no issue in finding any feature at any time. The home screen features five icons for the dialler, messages, camera, gallery, and Chrome, which are placed on the bottom of the screen. LG has gone for on-screen navigation buttons instead of capacitive ones.

As seen in previous LG dual-SIM phones, users get an on-screen button for jumping quickly to the SIM management settings. Under the hood, the LG X screen is powered by a 1.2GHz quad-core Qualcomm Snapdragon 410 SoC coupled with 2GB of RAM, and it packs 16GB of inbuilt storage. 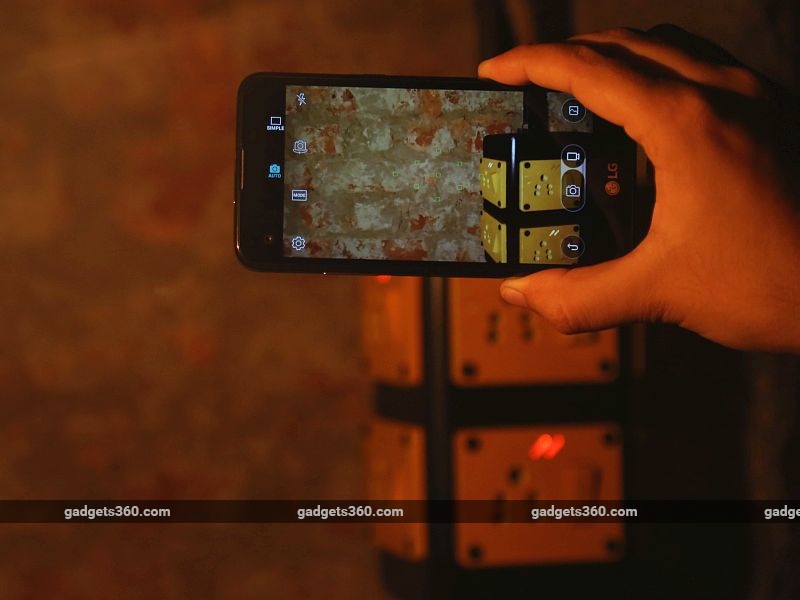 The handset supports up to 2TB of expandable storage. In our limited time spent with the LG X screen, we noticed that it handled multitasking and switching from one app to another pretty easily without any lag.

The 13-megapixel rear camera on the X screen took decent images in normal indoor lighting, with proper colours showing up. Low light images also looked above average. The front 8-megapixel camera seemed to take fine selfies. You get a lot of modes and options for the rear camera in the app. We also noticed that the rear camera locked focus quickly, which may be an advantage. We will however reserve our verdict of the LG X screen smartphone’s performance and camera until we get a chance to put it through its paces for a detailed review.

Final Thoughts
At Rs. 12,990, the LG X screen may seem like an underpowered handset compared to the current competition it will face in the Indian market. The use of an HD and not full-HD display may be considered a negative point by many, as could the lack of a fingerprint scanner. But the device still scores a lot when it comes to features thanks to the always-on second screen, which is a unique addition at this price point. The SOS mode is also no doubt another notable feature.

We believe that the biggest challenge for LG’s new X screen will be to take on the popular phones in the segment such as the Moto G4 Plus and the Xiaomi Redmi Note 3 which obviously offer better specifications. We will have to wait to see how well LG’s new X screen performs in the Indian market.