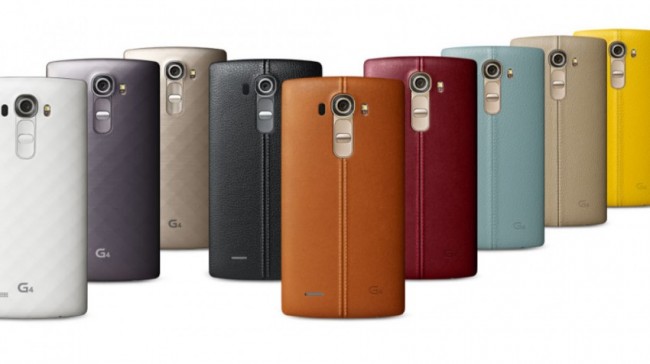 If you find a leather jacket irresistible, it may be hard to say no to the anxiously anticipated LG G4 smartphone. As one LG mobile device is being discontinued, the popular LG Google Nexus 5, another is being introduced.

The G4 is the latest of the flagship Android smartphone model from LG. Actually, with a 5.5-inch display, the device is strictly speaking a phablet. And it’s set to launch at a company event on April 28.

But since the Internet cannot wait, an LG G4 leak including details of the phone has already occurred. Images of the G4 show the phone wearing leather. Of course, that’s on the back of the device.

And based on the images provided by Pedro Peguero Jr. on his Google+ page recently, the G4 will be available with one of six leather-clad backs in different colors or with one of three metallic finishes.

The leather backs feature a hand-stitched seam up the middle, too.

Peguero says he snagged the leaked images from an LG micro site that featured photos of the upcoming G4.

Android Police confirms that the site was up for a short period of time but then removed. And on Peguero’s Google+ page, noted smartphone leak source Evleaks comments that the G4 page Peguero snagged appears legitimate and similar to other sites LG has published.

But while the images were clearly those of the new G4 the specs listed on the page seemed to be of the older G3. They may be a placeholder for the newer specs, Peguero surmises.

Of course, there are already details out there about the new device. Android Police reports that LG has been leaking information about this upcoming smartphone for some time now.

For example, the Web site reports the G4 will feature an upgraded camera. The new device should feature a 13-megapixel rear-facing camera with “laser focusing.”

The G4 is also expected to have a new 5.5-inch QHD display. That display should have a 2560 x 1440 pixel resolution with 538 pixels per inch, according to a previous Android Police report.

LG says that its new display can even operate with water droplets on the screen.