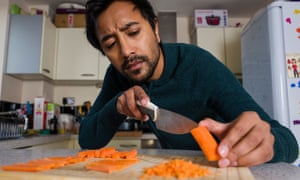 What?
The Fred Obsessive Chef Chopping Board (£19.99, Firebox) is a bamboo board etched with imperial scale, standard grid and protractor. Food chopped on the surface may be standardised by measurement.

Why?
Someone, somewhere was seriously board.

Well?
‘Chefs don’t measure asparagus.’
Facebook Twitter Pinterest
‘Chefs don’t measure asparagus.’ Photograph: Graham Turner for the Guardian
The interesting thing about chopping boards is that there is nothing interesting about them. They are beige curtains, lettuce sandwiches. They are 3/5, they are other people’s dreams. They are the most boring thing in your house. A meat-juice moat is as innovative as they get, and frankly, that’s fine. I don’t need a chop-faster racing trim. I don’t want a touchscreen board, algorithmically equipped to suggest that since I enjoyed dicing carrots, I might also like balling melon. No, no, no.

My preference is for an end-grain butcher’s block, treated with tung oil to bring out its natural colour. But that’s not why we’re here, is it? And so, take a look at the Obsessive Chef by Fred, billed as “a cutting board for perfectionists”. Finally, you can trim beans with geometric precision. There is a dicing guide for batonnet, allumette, julienne and fine brunoise, which sounds like a succession of French coquettes. But I know what you’re all wondering: how is it as a horizontal surface upon which to dismember veg? Hyperbole is not enough. Let me be the first to tell you that this board is OK. I chopped some leeks, which was fine, and a radish was all right too. How could it not be?

Deep adequacy aside, I disapprove of the fussy thing. First, chefs don’t measure asparagus. They obsess over restaurant critics, burgeoning alcoholism and child-support payments – but the string beans generally get a pass. My bigger objection is that kitchen perfectionists are a liability: they take four hours to make tea; wash beetroot like Lady Macbeth; peel potatoes until they disappear, trying to get a perfect circle. I know because I am one. Others may shout “Chop chop!” in my direction, but they don’t mean on this. I mean, what food requires the plotting of congruent angles? Slicing up a socialist brie? There is neither time nor need.

Cooking is engineering, but also art – like anything that matters, best ruled by the heart. Precision cutting board, pfff. I’d sooner chop food on my lap. Better to dice with death, than so little life.

Counter, drawer, back of the cupboard?
Under the boardwalk, ie in the sea. 3/5