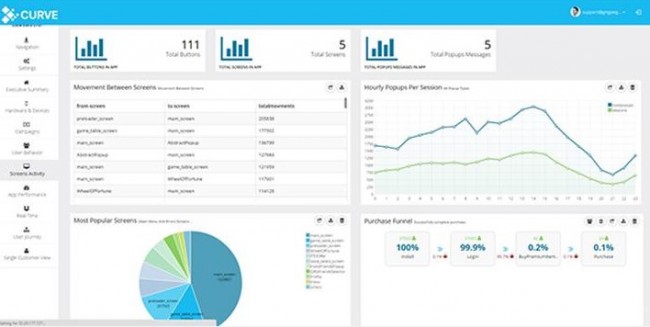 Israeli startup Gingee is launching its Curve cross-platform app metrics tools today to give app marketers and developers a single dashboard to review metrics from multiple mobile platforms. The tools are aimed at reducing development and marketing complexity for those hoping to reach wider audiences with their apps.

Curve helps app makers and marketers deal with issues, such as why a user experience is working well across all platforms and functions. By solving these problems, growth hackers, marketers, and user-experience staff can get answers about time spent in an app, return visits, crashes, loading times, and more.

Gingee says that Curve is different from competing solutions because it focuses app performance metrics, including user behavior, crash analysis, and monetization across all the operating systems — in real time. It goes beyond “what” is wrong by explaining “why” the application isn’t achieving the desired result. It’s this functionality that enables meeting the cross-organizational needs of the growth hacking, marketing, user experience, development, and quality assurance teams, the company said.

Curve lets the developers see the user experience on each screen and decipher the problem by putting the developer in the position of a user just before a crash. This makes it easier to find bugs and reduce abandonment rates. Curve is customizable for different key performance indicators. And it can run in the cloud or be installed on a client. Curve has auto-tagging, which means a developer won’t have to tag a part of the app for review but can automatically capture the customer’s entire journey before, during, and after an event.

Back in February 2014, Gingee unveiled development tools for mobile developers who wanted to make cross-platform apps. At the time, Gingee pointed out the thousands of different Android devices running a variety of versions of the operating system — along with smartphones and tablets working off iOS, BlackBerry, Windows Phone, and other platforms. Those tools served the same purpose of helping developers work with a truly cross-platform solution with a drag-and-drop user interface.

Gingee claims its integrated development environment automatically generates high-end code. The company says its cross-platform application development technology is based on a proprietary algorithm, which analyzes relations between objects and maps them uniformly to all operating systems and devices, ensuring a consistent interface and user experience across all devices and operating systems.

“While working on our cross-platform app development solution, we understood the need for a cross-organizational app intelligence tool to support the needs of the growth hacking, marketing, development, and user experience teams,” said Roei Livneh, CEO and cofounder of Gingee. “Curve completes Gingee’s development philosophy of offering app developers a solution to ‘build, convert, and analyze’ their applications.”

Livneh started Gingee in 2011 with $1.2 million in backing from angel investors. The company has 13 employees. The development environment competes with rivals, such as Unity Technologies, Corona, and Apportable. Gingee said millions of users have benefited from apps using the tools. The new metrics tool competes with business intelligence solutions form Appsee, Adjust, and Tune.

“We’ve worked with several user funnel/app intelligence solutions; each provided us with actionable insights on one functional area — marketing, user experience, product, or Q&A. Curve was the only solution capable of supporting all of our organization’s needs,” said Ori Zimber, CEO of Fame Boost Games, the developer of Big 2 Bonanza, a multiplayer card game on Facebook and Google Play.