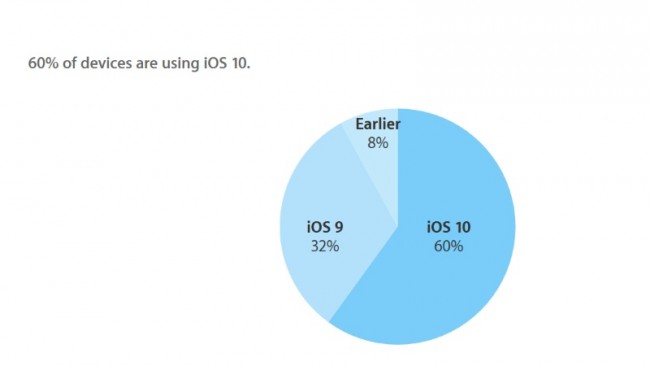 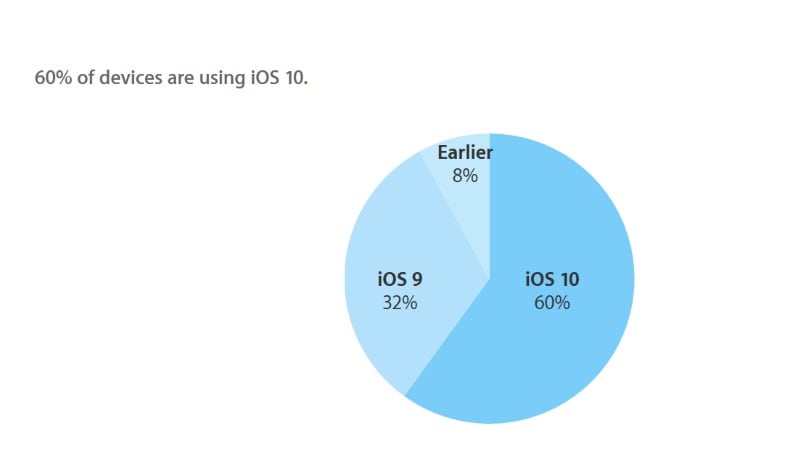 Earlier this month, Apple released figures of the adoption rate of various version of iOS. The statistics on October at the time showed that more than half of active iOS devices, 54 percent to be precise, had already moved on to the latest version of iOS. Now, the Cupertino-based company has revealed the latest numbers, which reveal that more people are gradually moving to iOS 10.

According to the new numbers made available by Apple on Tuesday through its App Store Distribution page, around 60 percent of the iOS devices visiting the App Store are now using iOS 10. Almost the entire rise in adoption of the operating system has come from iOS 9 users who now form 32 percent of the total iOS users, compared with 38 percent in earlier report.

The company claims around 8 percent of active iOS devices are presently on operating system versions before iOS 9.

To give you further perspective of the adoption rate, iOS 10 was reported to be running on 22.31 percent of active iOS devices in just three days since its release. Notably, this was a slower adoption rate compared to iOS 9, which registered the fastest adoption rate in company’s history. Around 50 percent of iOS devices upgraded to iOS 9 in just three days after its launch.In order to provide the optimum security features to their users, smartphone manufacturers have to consider the number of users that are eventually benefiting from their software rollouts. The adoption rate has now become more crucial factor than ever while drawing comparisons between iOS and Google’s mobile operating system Android. This is because recently it was revealed that a large number of latter’s users are vulnerable to a dated malware simply because they are still on earlier versions of Android.