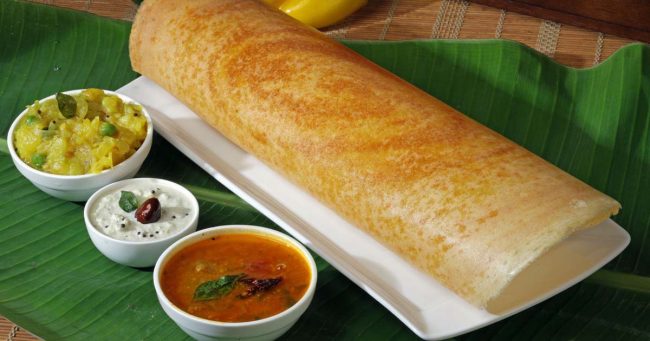 What is the defining dish of Indian cuisine?Well, around a decade ago, I would have said tandoori chicken and its younger brother, the chicken tikka.

But now, I have a new candidate for India’s national dish: the dosa. It has eclipsed tandoori chicken in India because of its sheer ubiquity. It turns up all over the country and because it is cheap and relatively easy to make, it has become India’s default office lunch option, and at hotels all over the country it is (along with the idli) the preferred breakfast dish for 80 per cent of guests.

The credit for the spread of the dosa goes to restaurateurs from Udipi who first brought the dosa to Mumbai in the 1940s and then continued to create new versions of the dish. It was only in the 1970s that the dosa began to travel north of Mumbai. The Taj was the first chain to put it on a breakfast menu – and thereby created a trend. There was a pioneering branch of Woodlands at the old Lodi Hotel in Delhi and Jayaram Banan took the dosa to the hearts of North Indians and the stomachs of Punjabiswith his chain of Sagar restaurants.

It is fair to say that restaurants have experimented with the dosa – but only up to a point. Most South Indian restaurants will now offer Mysore Dosas, Rava Dosas, Paper Dosas and the like. While all of them are delicious, they are not – in culinary terms, at least – vast advances on the basic dosa.

In an ideal world, chefs in India would be serving innovative dosas. Sadly, we have to look to foreign cities for these innovations

In the ’70s, some north Indian restaurants experimented with the Keema Dosa, an odd dish that did not really please either South Indians or Punjabis. And though you may still get Chicken Dosas or Keema Dosas at a few places, they have never been able to compete effectively with a humble masala dosa.

Indian chefs abroad have been more alive to the possibilities of the dosa. The great Gaggan Anand started doing lobster dosas and other variations on the dish many years ago. But Gaggan changes his menu so often that the dosas were never available for very long and in any case, they were overshadowed by his idli (the world’s lightest version of this classic dish).

Other Indian chefs cooking abroad – especially South Indians – have been as adventurous. Srijith Gopinath of San Francisco’s Campton Place, who is one of two Michelin-starred chefs in the Taj group, often merges South Indian classics with Western ingredients: I once had a caviar appam at his restaurant, a dish that sounds counter-intuitive but worked brilliantly.Srijith’s current menu offers a scallop dosa with a kale chutney (Thuvaiyal). Of course because Srijith cooks in California, the chutney is made from Heirloom Kale and the scallop is Day Boat (what the rest of the world calls a Diver Scallop). The dish has become one of the highlights of his new menu and even he is surprised by how well it has done. The vegetarian version, which is made with a stuffing of fava bean parts, has become one of his most popular dishes.

Srijith is still stunned by how much non-Indian guests have loved the dosa. “I knew it would be popular,” he told me, “but never imagined that so many people from so many different cultures would appreciate it so much”. He has concluded that people everywhere love dosas in any form. “It is the ultimate comfort food,” he says. “One of the easiest routes to make anyone happy.”

Though Srijith’s food (like Gaggan’s) is international in character, it is rooted in Indian cuisine. So, I kept waiting for a great global chef to discover the dosa and explore its possibilities.

There were one or two false starts. In 1978, Paul Bocuse visited Bombay and travelled to the market with a full entourage that included the chefs at the Taj (where Bocuse was cooking), many photographers and even Maya Hariharan from the Taj’s front office (she is now with Jet Airways), who was dressed as a fisherwoman. When the photos of the great man’s visit to the fish market appeared, Maya occupied centrestage. She was no fisherwoman but her good looks helped enhance the photo.

Asked to create a dish inspired by his visit to the market. Bocuse made a dosa. It sounded good, but all the old boy did was take a standard dosa, treat it like a French crepe and stuff it with a mildly-spiced seafood ragout. Small wonder that nobody remembers the dish.

I was more hopeful when Daniel Humm travelled through India. Humm is one of the world’s greatest chefs and as I wrote, a few weeks ago, the sort of chef who makes you believes that cuisine can be art. http://read.ht/BmCl (link to the column).

Unlike many other visiting chefs, Daniel did not treat his trip as a mere photo op but travelled to various cities, visited kitchens, spice-sellers and gritty markets (there is no beautiful fisherwoman in sight in his photos) and tried to understand how our food is created.

He said afterwards that the trip had been a revelation. Usually, when he ate something, he could work out what the ingredients were and how they had been treated. But Indian food remained a mystery and he often had no idea what he was eating. So, great chef that he is, he tried to unlock some of its mysteries.

I guessed that the India trip would influence Daniel’s next menu so I was not surprised when he put a ras malai-style kulfi in the dessert section.

But the one savoury dish he chose was – you guessed it – the dosa.

Daniel is too much of an artist to merely replicate a dish he ate in India so I wondered how he would reimagine the dosa. The answer seems to be that he took the techniques and forms of Indian cuisine and used them to showcase New York ingredients.

His dosa is stuffed with a yellow tomato condiment and served with a green tomato relish and whipped aged-goat cheese. Alongside come tomato tea with thyme and tomato salad with berries.

As he says: “It is our way of bringing to life the experience we had in India but done with the ingredients and flavours of our region and our restaurant.”

Why had he thought of a dosa? Well, he says, he left India “so inspired by the food, spices and people and took those memories back to New York to share with our team.”

The significance of what Humm has done cannot be underestimated. Most chefs will add a little spice to an existing dish and brag about the Indian influence. Daniel has distilled the form and substance of Indian food and created a new dish that does not depend on spices.

With a little imagination, it is not difficult to see where the idea may have come from: the relish is derived from the idea of a chutney, the goat cheese reminds you of a raita and the tea takes the place of rasam.

But unless you were familiar with dosas and how they are served, you would not realise what Daniel has done.

I told Sriram Aylur, the Taj’s other Michelin-starred chef, (at Quilon in London) about Daniel’s experiments with the dosa and complained about how unimaginative our domestic chefs could be when it came to the classic. Sriram’s response was to invite me for his dosas.

I went with my friend Fay Maschler, the doyenne of London food critics, and both of us were blown away by Sriram’s dosas. Suffice it to say that I have never ever eaten such magnificent Indian-style variations on the dosa. The two simple dosas were a crab dosa that was delicately flavoured and an egg dosa which was like a masala omelette-dosa.

Even more spectacular was his dosa-bonda, in which he took dosa batter and turned it into a bonda and a dosa that thought it was an uttapam, with the stuffing (in this case masala prawns) put inside the batter and cooked together.

In an ideal world, chefs cooking in India would be serving up these innovative dosas. But sadly, we have to look to Bangkok, San Francisco and London and to Michelin-starred chefs for these innovations.

But the Eleven Madison Park dosa is the most significant development yet. When an artist like Daniel Humm understands the magic of the dosa and expresses it in his own way you know that this dish is finally getting its due.