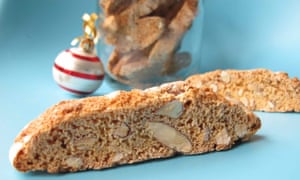 Going back in time has never much appealed to me, what with the terrible sanitation, the outrageous social inequality, the casual violence – and, as if all that weren’t enough, the awful biscuits. God knows our poor, rickety ancestors could have done with a rich, crumbly teatime treat, but instead they had to put up with biscuits as hard as iron and as dry as dust, designed to last, rather than to please.

To achieve maximum longevity, these unfortunate items would have been baked two or three times, in order to dry them out and turn them into joyless rusks. Hence the name, which comes from the Latin panis biscotus – twice-cooked bread. Most modern versions go into the oven just the once, but some of the most famous Italian biscotti, such as the Tuscan cantuccini, are still given a second blast of heat, making them ideal for dipping in coffee or wine – or, indeed, for giving as gifts, thanks to said long-life qualities.

Angela Hartnett and the River Cafe Classic Italian Cookbook both start their biscuits with butter and sugar, the former beating them together until fluffy, rather like a cake, before adding eggs. Rachel Roddy, Katie Caldesi and Theo Randall leave out the butter, which seems to be more traditional. Indeed, butter, much as I love it in every context, yields a richer flavour and crumblier texture reminiscent of the very un-Italian shortbread; the egg-only versions are crunchier and drier.

The higher the proportion of dry ingredients to fat, the crisper the result. Like Roddy, in her book Five Quarters, and Randall, I’m a fan of assertively crunchy biscotti, which is good news, because a firm, dry dough is also easier to handle.

Randall whisks his eggs and sugar together until pale and voluminous before adding the flour, while Roddy and Caldesi simply stir the eggs into the dry ingredients, which seems to work just fine; in any case, I don’t think there’s much air left in the mixture after stirring in the flour and nuts.

All the recipes I use keep things simple when it comes to flour and sugar: plain and caster are standard-issue, although Hartnett calls for super-fine 00 flour – the kind used for pasta – in her book Cucina. I can’t tell the difference, but no doubt customers at The Connaught, where she used to give them away as Christmas gifts, are more discerning. The River Cafe recipe also adds ground almonds, which impart a pleasant flavour, but seem to soften the texture of the biscuits slightly.

Caldesi doesn’t specify the type of sugar in her Italian Cookery Course, so I try granulated. This gives the biscuits a slight sandiness that’s sweetly reminiscent of the illicitly scoffed trifle sponges of my childhood. Unless you were a similarly greedy little pig, however, you should probably stick with caster.

Every recipe I try uses baking powder, which causes the dough to rise slightly in the oven, giving the finished biscuits a lighter, more open crumb.

Biscotti are almost infinitely adaptable: whether you go for the classic cantuccini flavouring – almond – preferred by the River Cafe and Hartnett or a more modern chocolate chip and cranberry number is entirely up to you. Hell, there are even recipes for hash biscotti floating around online (although I won’t link to them).

Nuts are a popular addition. As well as the aforementioned almond (Hartnett’s skin-on versions stand out particularly well against the pale crumb of the biscuit), the River Cafe uses hazelnuts, Roddy pine nuts and Caldesi pistachios, the vivid colour of which makes her biscotti look particularly fetching when sliced. Whichever nuts you go for, it’s worth toasting them first to bring out their flavour, while coarsely chopping them, as Roddy suggests, facilitates slicing the biscuits. Caldesi also adds candied peel, which feels rather festive.

It’s a good idea to flavour the dough itself – hard and bland is not an attractive combination in a biscuit. The aromatic citrus zests used by Roddy, Caldesi and the River Cafe are perfect for this. The aniseed and fennel seeds used by Hartnett and Roddy add an intriguing – and very Italian – hint of menthol, although, as the latter notes, “it’s a distinctive, opinionated combination that tends to divide people”. I won’t be offended if you leave them out or swap them for something more to your taste – perhaps Caldesi’s vanilla extract.

Hartnett is the only one to include a pinch of salt, which is almost always a good idea when baking.

Hartnett is also the only one to suggest piping the mixture on to baking trays, which proves impossible for me; it’s simply too thick. The River Cafe mixture, by contrast, is far too loose to form into the sausages that are much the easiest way to shape the dough. Rolling them in flour, as Randall does, or icing sugar, like Caldesi, makes the task even simpler.

Make sure you spread the sausages out well, because they will spread during cooking (Hartnett’s 3cm gap proves sadly insufficient in this regard, and I am forced to clumsily separate some of the conjoined twins with a carving knife).

The secret to biscotti success, according to my experience, is a hot oven. Puzzlingly, Randall, the River Cafe and Hartnett all cook them at 150C, which suggests to me a fundamental difference between professional and home ovens, since all three remain resolutely soft and doughy after the first bake. Roddy’s and Caldesi’s, put in at 200C and 180C respectively, are firm enough to slice.

Don’t try to cut the biscotti sausages immediately – wait for them to cool and harden a little to avoid compressing them, a lesson I learned the hard way with Randall’s version. That said, heed Hartnett when she says “they need to be still warm so you can slice them”. Caldesi’s brief second bake – a mere 2–3 minutes compared with Roddy’s 30 – leaves her biscotti too pale and soft for my liking. If you’d prefer not to break your teeth, however, reduce Roddy’s second bake to about 15 minutes. And don’t worry – they will firm up further as they cool.

Heat the oven to 200C/400F/gas mark six. Spread the almonds out on a baking tray and bake for about seven minutes. Allow to cool a little, then roughly chop.

Meanwhile, put 1 tbsp of the sugar in a mortar with the fennel seeds (if using) and bruise them together. Stir this, along with the zest, into the remaining sugar (if you’re not using the seeds, skip this step). Line a baking tray with greaseproof paper.

Mix the sugar with the flour, baking powder and salt, then stir in the eggs, followed by the almonds. Bring it all together into a dough.

Dust a work surface lightly with icing sugar or flour, then divide the dough into two. Roll into sausages about 5cm in diameter, then arrange well apart on the tray and flatten slightly. Bake for 20-25 minutes until golden and firm on the outside. Remove from the oven and leave to cool a little, reducing the heat to 150C.

Transfer to a chopping board and, using a bread knife, cut into diagonal slices about 1cm wide. Lay the slices on the baking tray and bake for a further 20-25 minutes, or until golden, then turn over and repeat (they’ll probably need less time on the other side). Allow to cool, then store in an airtight jar.

Biscotti: streets ahead of Rich Tea, or dry as the desert and equally tasty? What’s your favourite flavour, and in what do you like to dunk them?