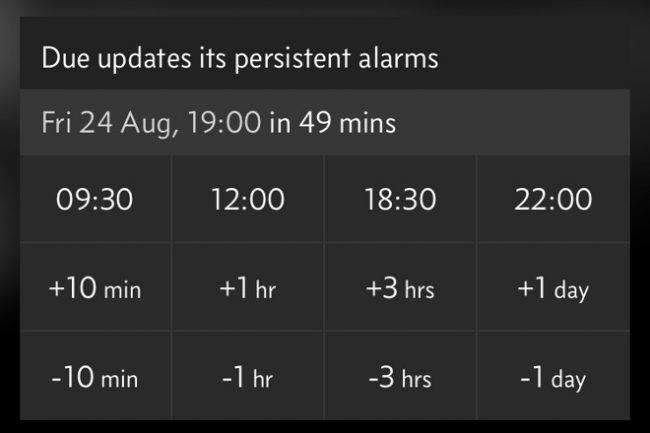 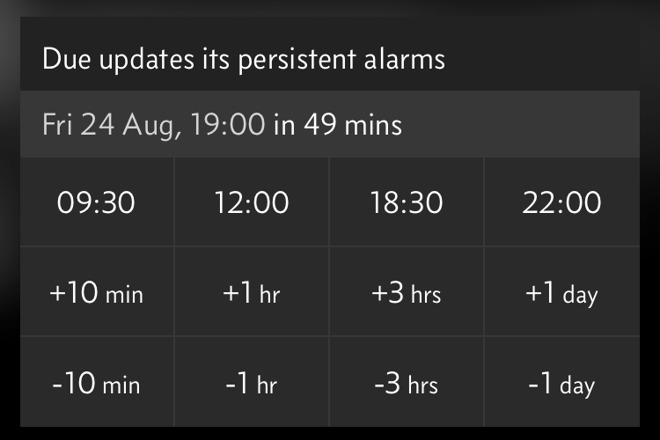 For eight years now, Due has chiefly done one thing —it has nagged. You set a reminder in it and when that time comes around, it notifies you, it sounds alarms, it taps your wrist if you’ve got an Apple Watch —and it will not stop. The newly updated Due 3 improves the haptic tapping and the options to snooze an alarm.

This sounds like every To Do app ever made but Due isn’t a task manager. You can’t set repeating reminders, you can’t add details or links. It is just like an alarm clock that you can set for any time on any day. 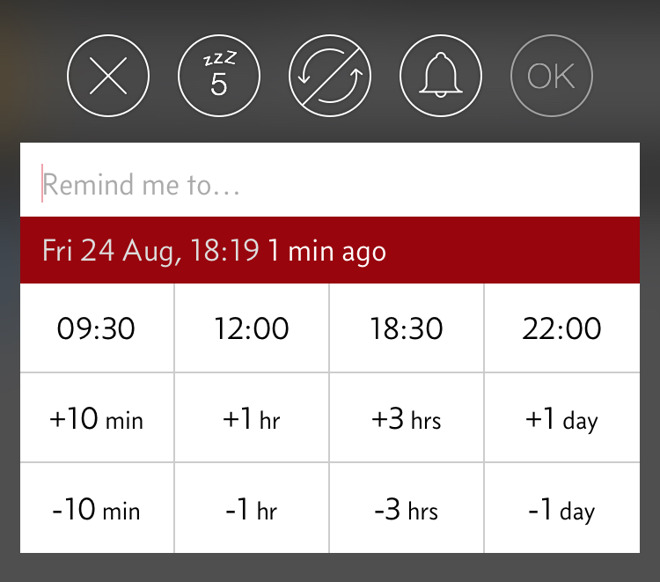 Yet, it is so effective that Due has commonly become an adjunct to the likes of Things and OmniFocus. It’s become the other reminder app you use even when you’re deep into those much more powerful tools.

It’s so effective that it is the exception to one of the tenets of most productivity advice. Whether you use a system like David Allen’s “Getting Things Done” methodology or roll your own, it is purely sensible to stick to one app. Have one place that you add your tasks to and you therefore have just one place to check for them.

Except, none of the major To Do apps are as piercingly effective as Due.

We’ll use Due when we’ve got to make a call at a certain time, when we must pick up a prescription. We use Due when the task is very specific, when it’s supposed to happen at a very particular time, and also when it’s very important.

That’s not to say we won’t add that task into our To Do app too, but when something ticks those three boxes of importance and specificity, we use Due.

What then typically happens is that it sounds when we can’t actually do whatever it is. That’s when we will tap on the snooze options —and that’s the major update with the new Due 3.

Previously you could mark a task as done or you could tell Due to remind you in an hour, three hours or a day. That’s the positive choice, the one that you could actively make. If you didn’t choose one, if you tried to ignore the alarm then it would stop by itself —but then it would come back and back and back.

So sometimes we’ll let it do that: if we’re driving somewhere we might let it automatically snooze for a few minutes, knowing that next time it sounds we will be in a position to do something about it.

Other times, though, we’ll get the reminder and realise that there’s no possible way to do the task right now. That’s when we’d choose the hour, three hours or day option and that was fine.

Except now we have more options and it’s a case of wondering how you coped without them.

Unless you’re in the Due app when the time comes, you now get a notification that includes a snooze button. Tap on that and you get far more choices. The old three are still there but on iOS they’re in a grid of 12 options. 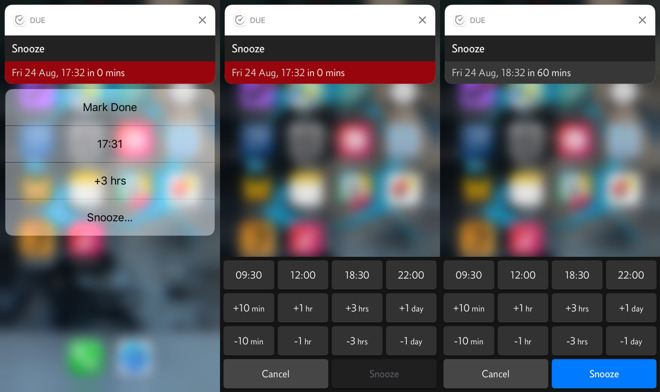 The rest of the options are to do with setting a delay from now: you can tell it snooze for ten minutes or the familiar one hour, three hours and one day.

It’s the remaining options that take a moment to understand: there are buttons to snooze your reminder for minus ten minutes, minus an hour, minus three hours or minus a day. They’re not meant to be used on their own, though. The idea is that with quick taps you can first set a snooze to be an hour by pressing the + 1 hour button and then change it to be just 50 minutes by next tapping – 10 minutes.

You get the same options on Apple Watch, though there it’s more about swiping down than tapping on a grid.

One reason this feels more natural in use than you’d imagine is that this snooze time picker is the same as the control you’ve long used to set a reminder time in the first place.

What feels less natural is that you need to go through some steps to make this work. You have to go into Due’s Settingsx, then Notification Snooze and finally switch on Custom Snooze. Until you do this, Due 3 functions the same as Due 2.

However, it would do, because this custom snoozing function is available as an in-app purchase within Due. This also sounds less natural than it seems in actual use because it’s to do with how the developer is trying to provide many upgrade options.

The most straightforward is that if you are a new user, you can buy Due 3 in the App store for $4.99 and get everything, including this custom snooze.

If you’re an existing user then you’ll still automatically get the new version so that you benefit from its redesign and improvements —but not the extra features. If you’ve already bought Due then you can upgrade within the app to get these new features for $2.99.

There’s one more possibility: if you have Due version 2.6 or later, you’ll get the new Due 3 for free.

It’s the custom snooze that is the most useful update in Due 3 but it’s neither the most visible nor the most physical.

The physical change is that the haptic alarms have been improved. This is how we most often use Due: while there are myriad alarm sounds, it’s the stubborn, persistent tapping on our wrist that most makes us do things.

We just clearly don’t have sensitive enough wrists to really assess what the improvements are. Nonetheless, they were effective before and they’re effective now.

If that’s how we most often get reminded, we do still have to go into Due to set up the reminders themselves and that’s where the biggest visual change is.

Now you have the option of three different themes to the look of the app. The familiar one from Due 2 is called Ash and it’s been supplemented by a Light and a Dark one. 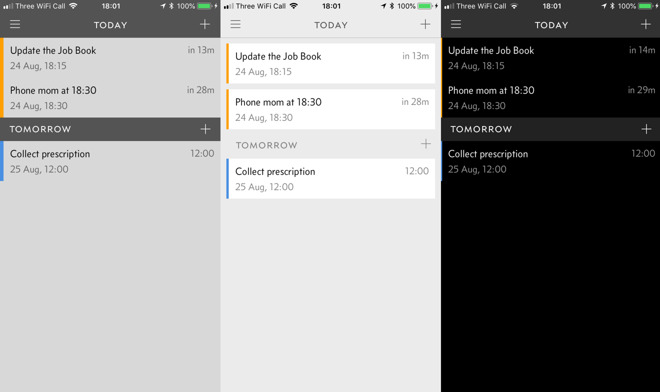 There is one more thing that Due does and does well. We tend to forget about it, we’re so used to just using the nagging reminders, but it also provides timers.

You can set your own and as many as you like but it comes ready with suggested ones like Power Nap for 20 minutes.

There’s been no update to this section but there doesn’t need to be: the ability to have multiple timers running at once was already excellent. When we remembered to look in the Timers section, anyway.

Nonetheless, these timers are good feature in an excellently made app. You have to be surprised that major To Do apps haven’t duplicated Due’s persistent alarms idea —and at least one is going to. The Omni Group has announced plans for this feature to be added to its OmniFocus 3 To Do app but not when.

Whenever that does get added, it will be curious to see how Due fares. It genuinely is a better idea to have a single place for all your reminders and tasks. Due will never be a replacement for OmniFocus or Things but perhaps either of those may one day be a replacement for it.

Not today, though. And at least until then, we highly recommend Due 3. For $4.99 on the App Store, you are certain to never forget anything vitally important again. So long as you remember to set a reminder.

Keep up with AppleInsider by downloading the AppleInsider app for iOS, and follow us on YouTube, Twitter @appleinsider and Facebook for live, late-breaking coverage. You can also check out our official Instagramaccount for exclusive photos.