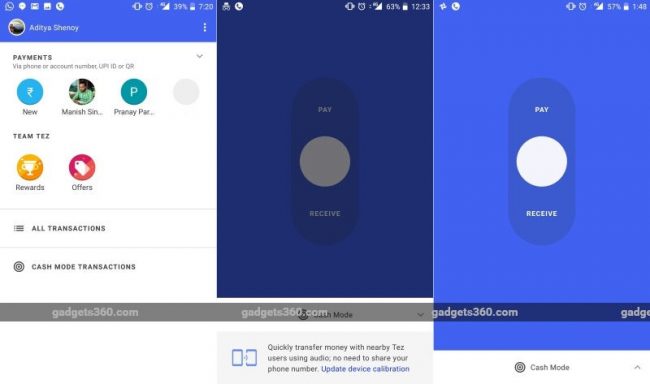 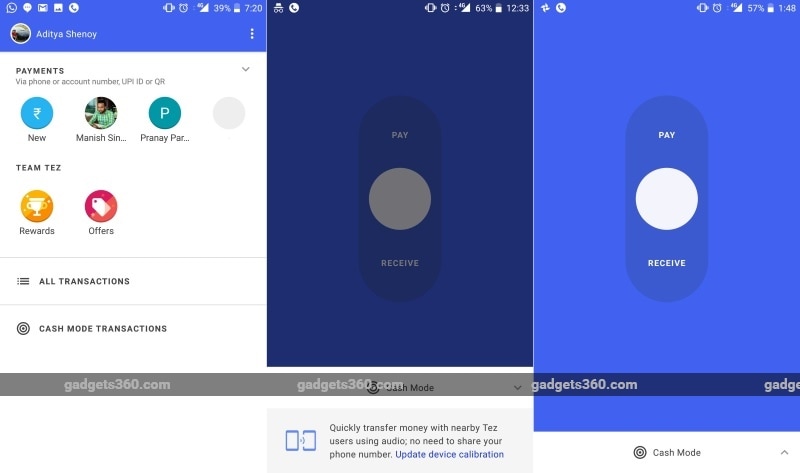 Google Tez, the Internet search giant’s first UPI-enabled digital payments app was launched in India this week. The app is aimed at catering to an audience looking for digital payment solutions. Currently, if you need a UPI app, you can choose between popular apps like Paytm, PhonePe, the NPCI’s BHIM app, and a range of UPI apps from different banks in the country. With so many already available in the market, should you shift to the Google Tez app? Here’s a breakdown of the Google Tez app, from what it can to do, to how to use it, and our take on its capabilities.

The Google Tez app is is a medium to facilitate bank transactions between the sender and the receiver. It isn’t a digital wallet service like Paytm, but is instead like other UPI apps, such as PhonePe. One of the interesting new features from the tech giant is “Cash Mode” which can be used to send money without details of the recipient. Typically, without the other person’s ID, or phone number, you have to scan their QR code, so this is a simple and easy to use feature that could be used in place or QR codes.

On Android, the Google Tez app’s download size is pretty low at 8MB, but it is still large compared to PhonePe (4.26MB) and BHIM (2.99MB). The app expands to over 20MB on the phone after installation, a size that shouldn’t cause much of an issue. Pretty reasonable. On iOS, it’s significantly bigger, with a download size up to 54.6MB. When setting up the app, users are shown a language selection first and you can choose between local languages like Hindi, Bengali, Gujarati, Kannada, Marathi, Tamil, and Telugu among others. Post the language selection, it asks you for your mobile number that is paired with your bank account – you are then asked to provide permissions. We also found that the Tez app links this to the Google account signed into the phone, on both Android as well as iOS. You do have the option to link a different account, but a Google account is mandatory for the app to work. 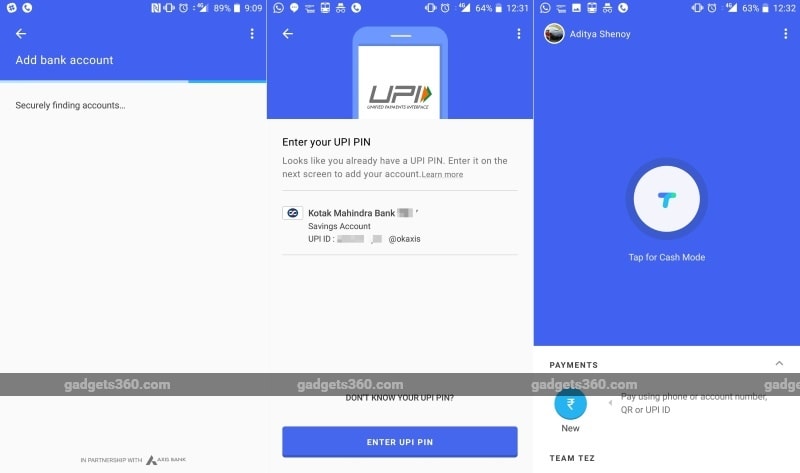 Once you enter the number, and are verified by an SMS OTP, you are given the option to set up a Google PIN or use the current screen lock method on the phone. You are then asked to select your bank from a list to link it for UPI transactions. If you haven’t set up UPI for that bank account previously, the Google Tez app will guide you to get it done. On the other hand if you have enabled UPI on the account, it will ask for the existing UPI PIN – which can also be reset via OTP, in case you’ve forgotten it. Tez then creates a VPA using the name in your email ID. While most other apps give you the option to choose the VPA, Tez does not have the option. The VPA created for you is based on the partnerships Google has at the time of launch (Axis Bank, HFDC, ICICI, and SBI). For instance, using a Kotak Mahindra account we were assigned a “@okaxis” VPA, but pairing it with an ICICI account resulted in an “okicici” VPA. When trying out the app, we did face difficulties when adding the bank account in Tez, though a couple of tries seemed to solve the issue. After these steps are complete, you’re good to go. 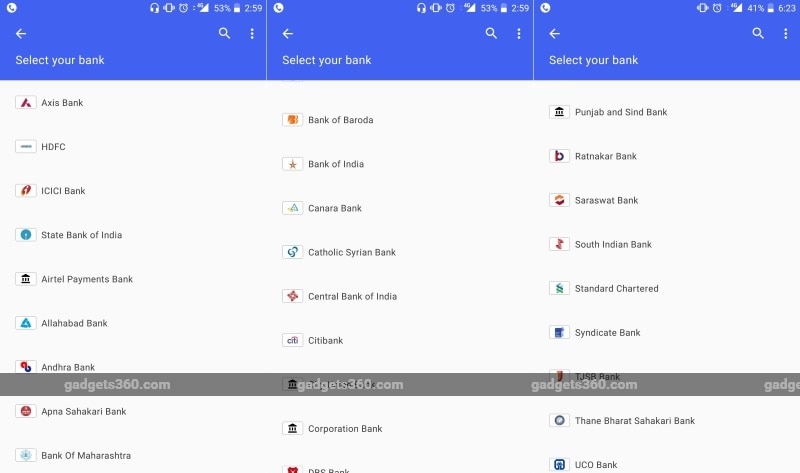 The first screen when the Google Tez loads up is pretty basic, has offers limited functionality when compared to PhonePe and BHIM. PhonePe gives you additional options like paying your utility bills through the app, while BHIM has simpler Send, Request, and Scan & Pay options – the last being for QR codes, in case you don’t want to share your ID with the other person. Making payments using the Google Tez app is easy, as it needs just a tap to select the recipient. The app also lists other Tez users from your phonebook for a faster process. Apart from Tez users, you can also add recipients using their bank account numbers and IFSC codes to transfer money, or send money via a UPI ID, QR code, or phone number. In case a contact has already been created, clicking on it will open the transaction log with that contact, and you can easily pay or request money using this feature. We tried transacting using the app and it worked without a hitch, though there were a few hiccups soon after launch on Monday – something Google explained to us was due to unprecedented surge in interest. 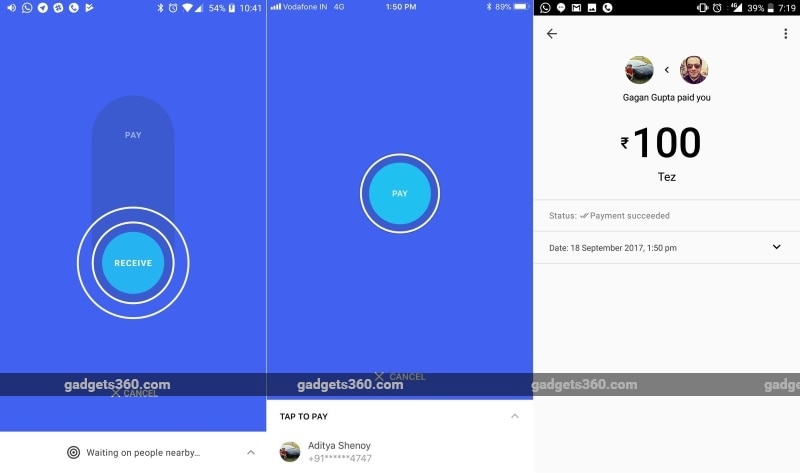 Swiping down on the first screen in the Google Tez app will give you access to “Cash Mode”, which lets you transfer money without having the recipient’s phone number or needing to share your own – useful in the case of transactions at a shop or another business. For this, the user transmits audio using Google’s Audio QR (AQR) technology to identify the recipients phone near you. We tried this feature and it worked as advertised even in a noisy environment. But we must say that it took longer than expected. 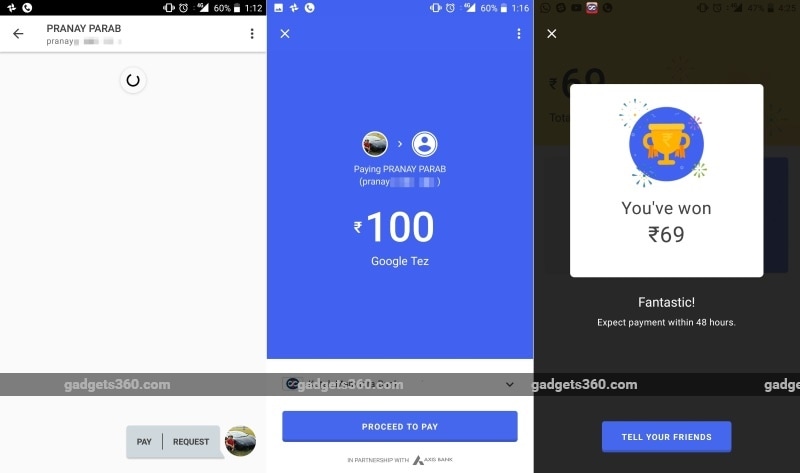 To incentivise Tez app, Google is offering users Rs. 51 for referring new users to use the app. After the referred individual makes their first payment, both users will get the amounts credited to their bank accounts. Apart from this, using Tez to transfer money (Rs. 50 and above) awards both the sender and the recipient Google Tez Scratch Cards, with one scratch card per week for the sender-recipient pair. Scratch card gives user the chance to earn up to Rs. 1,000, which is transferred back to the respective bank account. We received Rs. 69 for a Rs. 100 transaction which was instantly credited to the bank account. You can earn a maximum of 10 rewards per week, up to a total of Rs. 9,000 per financial year. There are two types of Google Tez Scratch Cards. The blue ones are awarded to both sender and recipient, while one red ‘Lucky Sunday’s card is awarded to the sender once per week. This red Google Tez Scratch Card is locked until each Sunday, and users will be able to scratch it for a chance to win up to Rs. 1 lakh – as per Google.

After the initial hiccups the Google Tez app seems to be working reliably. The app works as expected and the Cash Mode feature does look promising. However in comparison, the PhonePe app looks more useful as it lets you pay your utility bills and other stuff. But if basic money transfer is what you need, the BHIM app still works just fine.