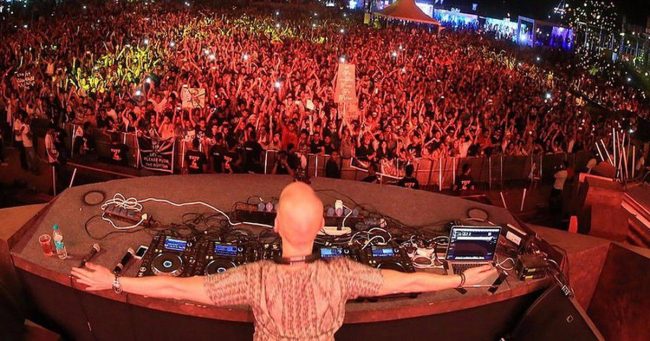 The total number of tourist deaths in and around the Sunburn Electronic Dance Music Festival in Goa rose to three on Monday with a Bengaluru resident collapsing near the event venue. Sandip Kotta died at a state-run hospital in Mapusa.

Kotta initially complained of “extreme uneasiness” at the festival venue at Vagator beach in North Goa district, a senior police official told PTI. “An ambulance was called at the venue and he was rushed to a state-run hospital in Mapusa town where he died minutes after admission,” the officer added.

On Friday, two tourists from Andhra Pradesh – Sai Prasad Malayala and Venkat Satyanarayana – collapsed while waiting in a queue to enter the venue. They were taken to a hospital where doctors declared them dead.

Even though there are speculations that the three may have died due to drug overdose, the police are yet to confirm the cause of deaths. They are still awaiting the final report of the post-mortem inquiry to ascertain the cause of death.

The three-day Sunburn festival concluded on Sunday. It is a decade-old festival that attracts music enthusiasts from across the globe. This year’s event many high-profile performers perform.

However, the deaths triggered a political debate.

Goa Bharatiya Janata Party leader Rajendra Arlekar on Monday wondered if such festivals were required at all. “Do we really need events like Sunburn to promote tourism?” he tweeted. “Can we not redefine our priorities in this sector. Let’s ponder.”

Arlekar’s comments came after Chief Minister Pramod Sawant and Tourism Minister Manohar Ajgaonkar extended the government’s support to the event. “We cannot focus on the two deaths and ignore the 50,000 people who were enjoying at the festival,” Ajgaonkar had said. “We are pained at the deaths. We are aware that we have to care for the tourists who come to Goa. We do not yet have the report over why they have died. If it is indeed that they have died because of drugs then we have to be alert.”

State Culture Minister Govind Gawade on Monday said that no one has been forced to attend the event, reported PTI. “They go on their own,” he said. “No one is forced to go there. We are not distributing any passes to anyone. It is the music enthusiasts who like to go there, they do it out of their own wish.”

On Sunday, the Congress claimed drug overdose could be the reason for the death of two tourists from Andhra Pradesh. It indicated the sale of narcotics at the venue, alleged the party. It demanded that permission for the annual festival be revoked and an inquiry be conducted.

The Goa Forward Party has sought a probe by the Central Bureau of Investigation into the deaths.

The state police, however, said no case of drug use or sale has been detected at the festival venue. “The ANC [Anti Narcotics Cell] has developed and trained a very capable dog squad with two highly trained sniffer dogs for drug detection,” said Superintendent of Police Shobit Saxena, according to Hindustan Times. “Drug sniffer dogs have been deployed for the first time in a public event at Sunburn to scan the premises of the venue and detect use of drugs. Three undercover teams of ANC were deployed inside the venue for active detection.”