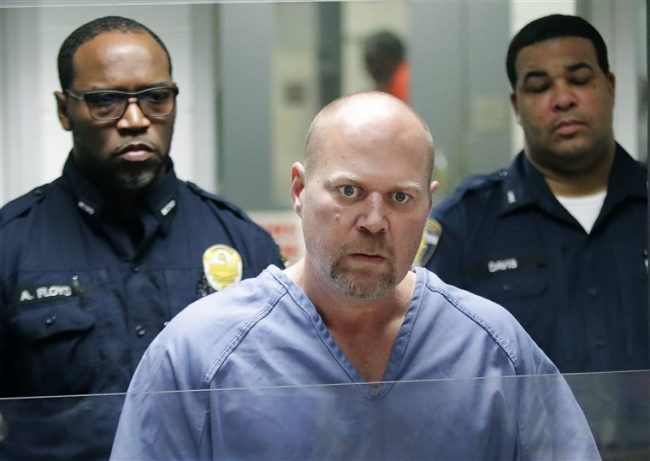 A woman who was a fixture at her church choir meetings and a man who led his Christian ministry group were buried by their loved ones this week after they were gunned down Oct. 24 at a Kentucky grocery store.

Maurice Stallard, 69, and Vickie Lee Jones, 67, were killed when accused gunman Gregory Bush, 51, walked into the Kroger store in Jeffersontown, near Louisville. He shot Stallard first and then went outside and shot Jones in the parking lot.

Investigators said Stallard and Jones, who are black, had never met Bush, who is white, and had no connection to him.

“A tragedy was an accident,” said Jones’ nephew Kevin Gunn. “This was intended.”

Gunn and his family buried Jones Saturday morning at her home parish, the Church of the Living God, according to NBC affiliate WAVE3.

Gunn, the designated spokesman for the family, has been adamant about calling the crime for what he said it was — a “racially motivated” shooting.

In the days that followed, police have started arriving at the same conclusion, investigating Bush’s computers, a witness’ statement claiming the gunman told him “whites don’t kill whites,” and the suspect’s failed attempts to enter a predominantly black church minutes before the Kroger shooting.

It culminated in a statement Wednesday from the United States Attorney’s Office in the Western District of Kentucky stating that federal investigators had an “open and active federal hate crimes investigation” under way.

Bush pleaded not guilty Friday to two counts of murder, one count of criminal attempted murder and two counts of wanton endangerment after he was indicted by a county grand jury.

“I believe there is no explanation for what happened — he did not know either of these individuals,” said Thomas B. Wine, commonwealth attorney for the 30th judicial district. “The first victim in the case, Mr. Stallard, was shot from behind. He had no idea what was getting ready to happen.”

As the case winds its way through court, friends and family of Jones and Stallard tell NBC News that coping with their sudden loss remains a challenge.

“There is no peace,” said Jones’ close friend Joyce Davidson. “There won’t be any peace until Jesus comes since it was such a senseless crime. You should be able to go to the grocery without being afraid that you would be killed while you’re in there.”

Davidson had been friends with Jones for close to 55 years and said she had just seen Jones a day before the shooting. On Thursdays, Jones and Davidson would attend their church’s choir meeting, practicing for Sunday service.

Jones would take it upon herself to make sure everyone was singing their part correctly, Davidson said.

“I sat in front of her, and she would always lean over the pew to put you on note,” Davidson said.

Jones, who has two children, Sean Jones, 44, and Marcus Jones, 42, volunteered for the women’s and youth ministries, according to her aunt and fellow parishioner Rosita Young. So when news of her death hit her friends within the faith community, they were shocked.

“We cannot make sense of what has happened, but we come together as we always do as a church family,” church leaders wrote on their Facebook page two days after the shooting. “Vickie Jones we will miss your smiling face but know God needed you to come home with him. We love you!”