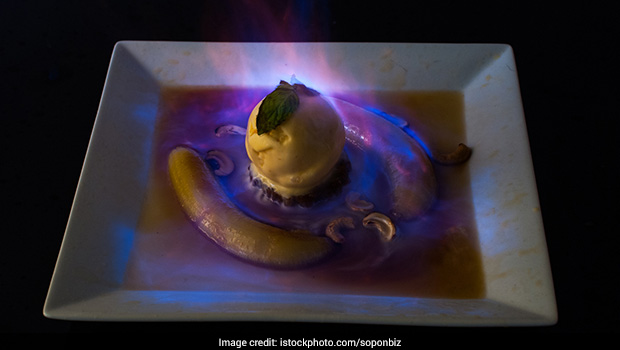 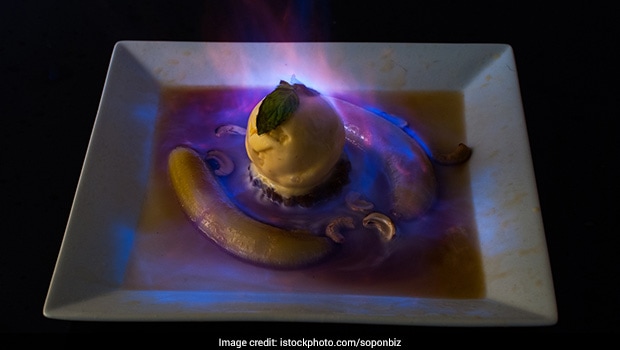 When it comes to eating and enjoying food, there are a lot of things at play. The magic begins when the food arrives plated beautifully, and then progresses when the aroma of the freshly cooked meats or vegetables fills up the room. The presentation of a dish, that includes the style of plating and the way all the colors come together, is as important to the eating experience as its taste. For people who love a little bit of drama, nothing can work better than lighting their food on fire.

Flambé is a French word that means ‘flame’ and it refers to the practice of topping your food with alcohol or sugar and lighting it on fire. The trick is used by restaurants and chefs around the world, not just to add that amazing slightly burnt flavor to some dishes, but also to impress their customers. Here are some examples of dishes taste and look so much better when they’re flambéed:

This dish is the perfect flambé dessert for those who love to end their dinner with some drama. The dish is made from sliced bananas served in a dark sauce made from vanilla, brown sugar, cinnamon, dark rum and banana liqueur. The dish is finished with a side of vanilla ice-cream and a helping of alcohol which is then lit on fire.

The cooler cousin of the crepe, the flambéed crepe is popular among fire lovers. The French delicacy even has an origin story. A famous French chef, who was just 14 then, had accidentally set ablaze, a dish that was going to be served to the Prince of Wales. The dish has caught on with foodies around the world, with it being flambéed as an end-of-dinner performance at restaurants.

Creme brulee or burnt cream is another all-time favorite dessert of dessert lovers. It’s also known as the trinity cream and has a soft, gooey inside of custard and a top crystal-like layer of caramelized sugar. It’s a French classic and is served at room temperature. . Sometimes a little heated alcohol is poured on top of the crystal layer and is lit with a torch, to intensify the burn cream taste.

Pizzas are perfect enough in themselves, but nowadays, they’ve got a hot, special makeover. Perfectly cheesy thin crusted pizzas are doused with alcohol that is then lit with fire. This melts and perfectly toasts the mozzarella on top, giving you an especially satisfying slightly-burn taste.

The good old Christmas pudding has also gone flambe this season. Flambe Christmas pudding videos are a rage on Instagram around the holiday season and to be honest, these look so much better than the oh-so-sweet traditional Christmas pudding posts. Take a look! The flames go on until the alcohol burns out, leaving behind a warm, toasty flavor on the pudding.

Flambéing isn’t as easy as it looks though. You can flambe almost any food you like, if you know how to properly do it. The trick to do it is to pre-heat the alcohol before pouring it onto the food. This way, it doesn’t take long to reach the ignition point and lights on fire immediately.