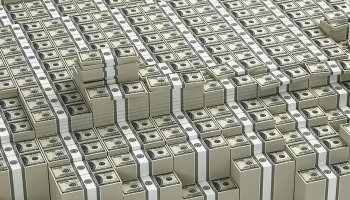 Cash confiscated from a Michigan family at PHL last week prior to their flight to Qatar.

A Michigan family flying to the Middle East learned a hard lesson about honesty last week at Philadelphia International Airport.

Officials with U.S. Customs and Border Protection said they found and confiscated $93,393 from a man, his wife, and their five children while they went through customs Wednesday to board a flight to Qatar.

They could have kept it all, too, customs officials said, if they had told the truth.

“The best way to keep all of your currency is to honestly report it all to Customs and Border Protection officers during inspection,” Shawn Polley, acting CBP port director for the Area Port of Philadelphia, said in a news release.

Family members had reported that they were carrying $12,000 in cash, both in writing and when they were interviewed by officers at the airport, officials said. Upon inspection, officers discovered the $93,393 concealed on the bodies of the man,  the woman, and their adult child.

No criminal charges were filed.

Officers returned $3,393 to the family and they were released, continuing to Qatar. The family was not identified.

CBP spokesman Stephen Sapp said Qatar was not the family’s final destination. He declined to offer more details, saying the family could file a petition to have the money returned.

Qatar, a small peninsular nation in Persian Gulf, is connected by land to Saudi Arabia and has been in the news often over accusations that it harbors and aides terrorists. Saudi Arabia, the United Arab Emirates, and Egypt have imposed diplomatic and economic blockades.

On June 15, a traveler bound for Jamaica had $39,225 confiscated at PHL. That woman also under-reported the amount of cash she was carrying. No criminal charges were filed in that case.

The CBP says that, on a typical day in the United States, it seizes $289,609 in undeclared or illicit currency.

Thanks for your continued support…

We recently asked you to support our journalism. The response, in a word, is heartening. You have encouraged us in our mission — to provide quality news and watchdog journalism. Some of you have even followed through with subscriptions, which is especially gratifying. Our role as an independent, fact-based news organization has never been clearer. And our promise to you is that we will always strive to provide indispensable journalism to our community. Subscriptions are available for home delivery of the print edition and for a digital replica viewable on your mobile device or computer. Subscriptions start as low as 25¢ per day.
We’re thankful for your support in every way.