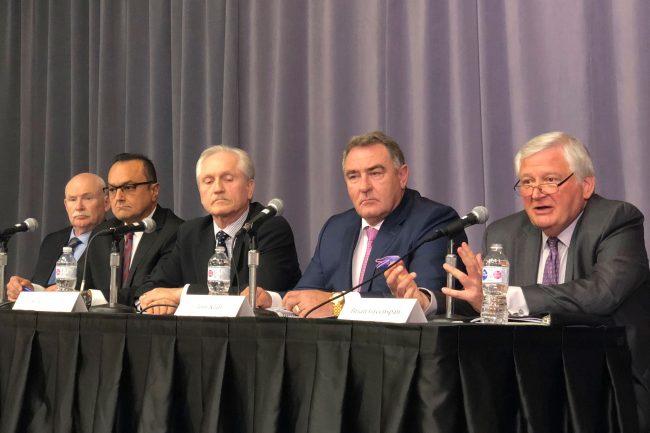 A Canadian lawyer announced Friday a multimillion-dollar reward for information about the death of drug-company billionaire Barry Sherman and his wife, Honey.

He said the billionaire’s family has set up a tip line and is offering up to 10 million Canadian dollars ($7.6 million) for information leading to the arrest and prosecution of a suspect.

“We’re trying to light the fire,” Greenspan said. “To provide new incentive for the members of the public to come forward with information but also to light the fire under the Toronto police service.”

Sherman, the founder of generic drugmaker Apotex, and his wife were found dead by their basement pool in their Toronto mansion last December. Greenspan said they were seated next to each other with ligatures pulled up around their necks and wrapped around a railing.

The day after, some media outlets quoted unidentified police officials as saying the deaths appeared to be a murder-suicide. That upset the couple’s four adult children, who hired their own team of investigators.

Greenspan said Toronto police made a litany of mistakes. “They failed to recognize the suspicious and staged manner in which their bodies were situated,” Greenspan said.

Greenspan also said police did not properly check points of entry into the mansion or collect enough fingerprint and DNA evidence. He also said his team has recovered evidence, including 25 finger and palm prints, that Toronto police missed.

And he said police didn’t vacuum the area where the they were found, noting intruders might have left behind a small sample of hair.

Toronto police chief Mark Saunders later defended his officers and said they did not reach an early conclusion that it was a murder suicide. Saunders said over 50 officers have been involved in the case and the house was searched forensically for over six weeks. He also said over 200 people have been interviewed and said the investigation continues.

“The investigation was done well and continues to be done well,” Saunders said.

Saunders said he supports the family’s decision to put up the reward.

“The Sherman family is frustrated,” he said. “We all have the same goals.”

Saunders declined to release details of the investigation, noting he had no doubt the suspects were watching his press conference.

Sherman, 75, was known for litigiousness and aggressive businesses practices as he developed Apotex Inc., which has a global workforce of about 11,000. In “Prescription Games,” a 2001 book about the industry, he mused that a rival might want to kill him