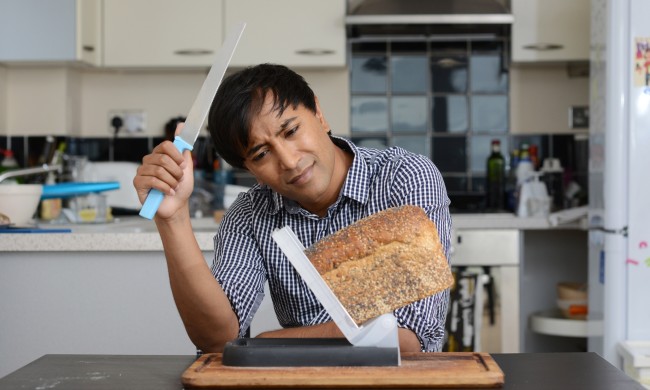 The Evenslice (£20.99, Lakeland) is a depth-variable frame edged with metal trim. Loaves held against a fixing backplate may be segmented evenly by a bread knife sawn down the guide rails.

Let’s go back to why. Before I dismiss this futile bread-shelf as another marker of civilization in decline – which, don’t worry, I am about to do – I’ll admit I wasn’t always brilliant at cutting bread. Early attempts were too thick at the top, tapering into transparency halfway down, like a sarcastic slice of the world’s driest cake. But I got the hang of it after the age of, ooh, eight. Even if I hadn’t, legend tells of pre-sliced loaves that you can buy in any shop now. What about homebaked, artisanal jobbies? If you routinely hand £10 over a trestle table in exchange for walnut-speckled pain au levain, you definitely won’t want this unsophisticated oddity in your house.

The feel of metal sliding down metal makes my fillings vibrate

So who is it aimed at? The actually stupid? Anally retentive bakers who test their brownies against a set square and make cupcakes with a compass? Even if you do require toast to be unerringly uniform down to the micron – perhaps you’re in charge of Elton John’s breakfast – I’m not sure this is the gadget. (Although, stood up, it does look a bit like a music stand on which to cut bread, one page at a time.)

While it folds down fairly flat, the thick plastic is unpretty. In use, it’s hard to keep the whole knife in contact with the steel rails throughout. It naturally wants to angle away; besides which, the feel of metal sliding down metal makes my fillings vibrate. Thickness is controlled by a reversible plate that slots into sequential grooves, and it manages seven settings. I’m impressed with the thinnest: an even, 3mm sliver I probably couldn’t pull off unaided.

Nonetheless, that “why?” is as difficult to get past as the back end of a bus. What’s next? An app that reminds you to shut your eyes at night? Velcro underwear? Ye gods. If you can’t slice bread without training wheels, you probably don’t know which end of the knife to hold either. Get outta the kitchen!