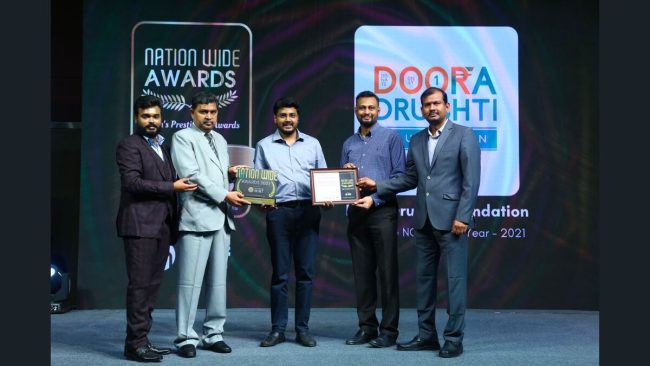 India has been working on the eradication of poverty for decades. But with such a vast majority of the population belonging below the poverty line, the issue isn’t yet resolved. NGOs like the Dooradrushti Foundation have mustered the courage to help the needy and support their two square meals and necessities with the help of capital garnered through awareness campaigns. Dooradrushti Foundation has raised over ten lakhs in a year since its inception all of which is used in helping and sponsoring people who can no longer support themselves because of their illness, lack of jobs, disabilities, etc. A very surprising thing to note about the effort of the Dooradrushti Foundation is that they have managed to raise this huge amount by only taking one rupee and not more from each of their contributors.

It may be surprising to many regarding what can be achieved or procured with a minuscule amount of one rupee. But Dooradrushti Foundation has used that one rupee donations from over 10000 members to help more than 60 individuals have a better, healthier life with ample food and lodgings. The foundation has close to 11000 members currently but, it aims to hit its expected goal of one lakh regular contributors in the coming years. Dooradrushti Foundation received the Innovative NGO of the year award because of their ingenious idea to run a non-profit organisation that focuses on helping individuals.

Dileep Kumar Kandula shares his intention behind keeping the donation amount so small and says,” Selflessness is a very difficult trait to acquire. People find it very hard to give away money they earned by toiling day and night. Moreover, large donation amount makes people sceptical and also narrows down the chunk of the population who can make such contributions. One rupee is an amount that almost anyone can donate to help people, and it won’t make a massive dent in their pockets. Our idea is unique, but it can only work if we have consistent contributors who make their donations timely. We aren’t asking anything more and all the overhead costs are covered by us with our earnings from our jobs and investments. I urge everyone to become a member of the Dooradrushti Foundation and help make a difference in society.”