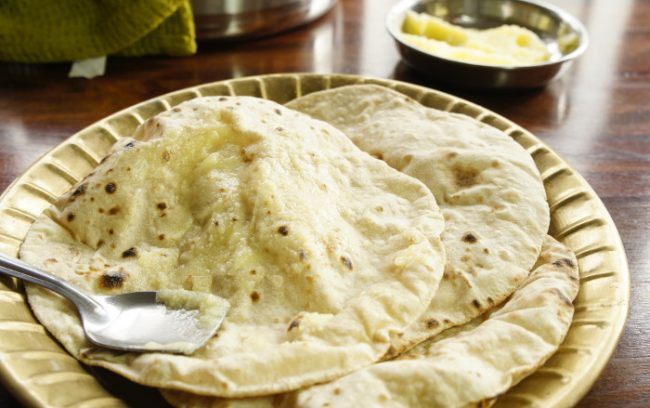 Be it the crispykulchas, or the silky Roomali roti, the decadentparathasor the delightful pooris and luchis, Indian cuisine is incomplete without the mention of its wide variety of breads. Two such breads that have been the best companions to our subzis, curries and gravy forever are Phulkas and Chapattis. Phulkas and Chapattis are both breads made of wheat flour. In both cases, wheat flour is mixed with water and kneaded softly till a dough-like consistency is achieved. Often, we use both terms interchangeably, but is there really a difference between the two? Is phulka the same as a chapatti? Lets find out.

According to the book , ‘A Historical Dictionary of Indian Food’ by renowned food historian KT Acharya, Chapati is a “thin 20 cm circlet of wheat dough, rolled out after thorough kneading and resting , and then dry-roasted on a slightly concave iron griddle, the thava. It can then be puffed out by brief contact with live coals to yield a phulka. Both are major ways in which wheat is consumed in India.”

He adds, “Cave paintings do show balls of dough being made, and in Harappan sites, flat metal and clay petals that could be thavas have been found in plenty, so the chapathi could go back a long way. ”

Experts claim that while both are made of the same flour, the key difference lies in the mode of cooking and sometimes in size and thickness.

1. Size: Chapathi is usually bigger in size and diameter than a ballooned Phulka.

2. Cooking: Chapattis are traditionally cooked on a tawa. When roasting of one side is done, it is turned over using a pair of tongs and the other side is put to roast on the pan. Phulka is a smaller round bread, prepared from wheat dough whose one side is cooked on a tawa and the other side directly on heat. When placed immediately thereafter on hot embers, the bread puffs up to yield a phulka. The phulka puffs up into a ball due to accumulation of steam inside it.

3.Serving: Both the chapatis and the Phulkas are needed to be served as soon as they are ready. Phulka especially, if not served immediately can lose all its puffiness and flatten, which is not the case of chapatti as they are already flat. Phulkas are typically served ‘sookha’, meaning without any added grease. Since, phulkas were meant to be served immediately, there was no seeming need to apply ghee to it.

4. Thickness: While the rolling pin is used for both Phulkas and Chapatis, some people further use their hands to ‘pat’ the chapatti between their palms to even out the dough. This helps the chapatti have an even distribution of dough all over.

Both phulka and chapatti are widely consumed, especially up in the Northern states if India where wheat production is massive. A regular-sized phulka or Chapati has about 70-100 calories according to the National Institute of Nutrition (NIN).