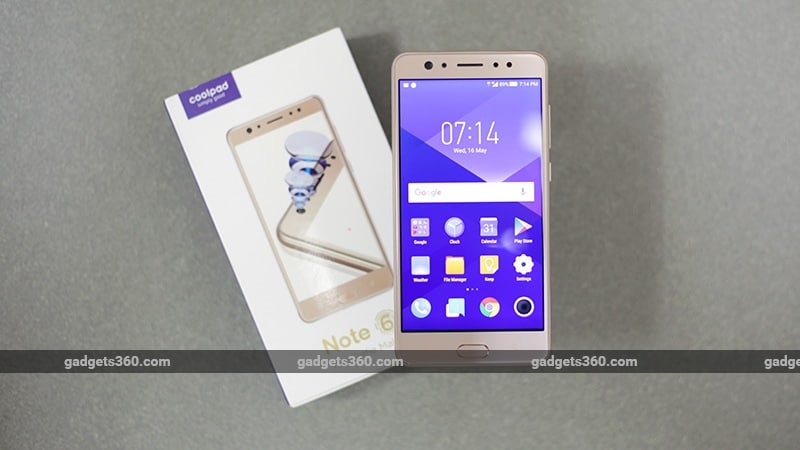 India is a big market for many smartphone manufacturers, and of late, we’ve been seeing phones designed specifically for our demographic, such as the recent Realme 1 (Review) and the Asus ZenFone Max Pro M1 (Review). Following a change in majority ownership and with fresh funding in hand, Coolpad is back with a new set of products and a renewed focus on the Indian market. The company also pans on entering the wearables space later in the year. While many companies now focus on online distribution, Coolpad’s new Note 6 will only be available offline. With prices starting at Rs. 8,999, some of the main highlights of the Coolpad Note 6 include dual selfie cameras and a big battery. Let’s see if offers a compelling enough package to recommend over our usual favourites in the sub-Rs. 10,000 price segment.

It’s been a while since we last reviewed a Coolpad smartphone, but the new Note 6 feels similar to some of the company’s older models. The body is made mostly of plastic, and yet it feels sturdy and well put together. The mildly curved back and sides blend well with the 2.5D curved-edge glass so you never feel any sharpness. It measures 8.62mm in thickness so it’s not particularly slim, but the weight is distributed well so we didn’t mind the hefty 170g weight too much.

The Note 6 has a traditional 16:9 display, measuring 5.5 inches diagonally, with full-HD resolution. Coolpad told Gadgets 360 that it has used Corning Gorilla Glass 3 on the front. There are multiple cutouts at the top for the two cameras, a fill light, and sensors. Below the display, you get a capacitive Home button and the Android navigation keys, none of which are backlit. The fingerprint sensor is integrated into the home button, and is quick at authentication. 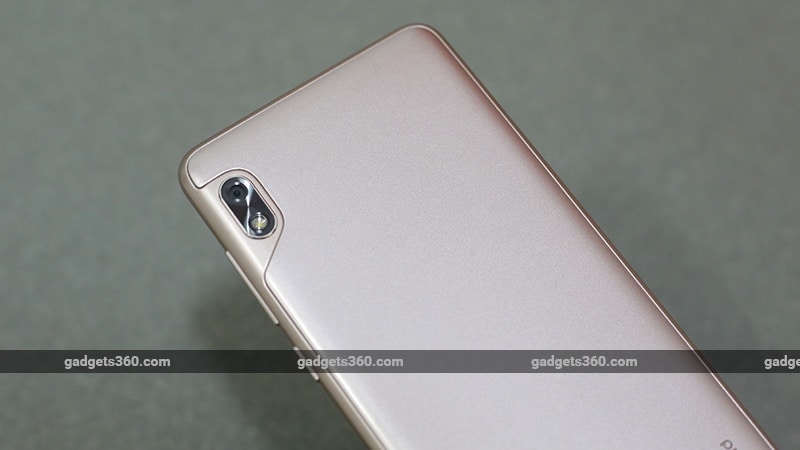 The SIM and microSD card tray can be found on the left. It can accommodate two Nano-SIM cards and a microSD card. At the bottom, we have 3.5mm headphone socket, a Micro-USB port, and a grille for the speaker. The back panel has a cutout for the camera module, which makes for a distinctive look.

While the resolution of the display is good and colours are fairly punchy, we found the brightness level to be a bit inadequate. It’s also tough to see anything under direct sunlight. Touch response is good. Coolpad also bundles a screen protector in the box. You also get the usual accessories like a headset, charger, cable, SIM eject tool, and warranty information.

Companies like Oppo and Xiaomi are really upping the ante when it comes to bringing powerful SoCs to the mainstream. In contrast, the Coolpad Note 6 with its Snapdragon 435 mobile platform isn’t aiming to break any new ground on this front. In the AnTuTu benchmark, the Note 6 delivered a score of 58,012, while GFXbench gave us 14fps in the T-Rex rendering test. These are not terrible scores, but certainly not competitive against other recent smartphones in the same price band. 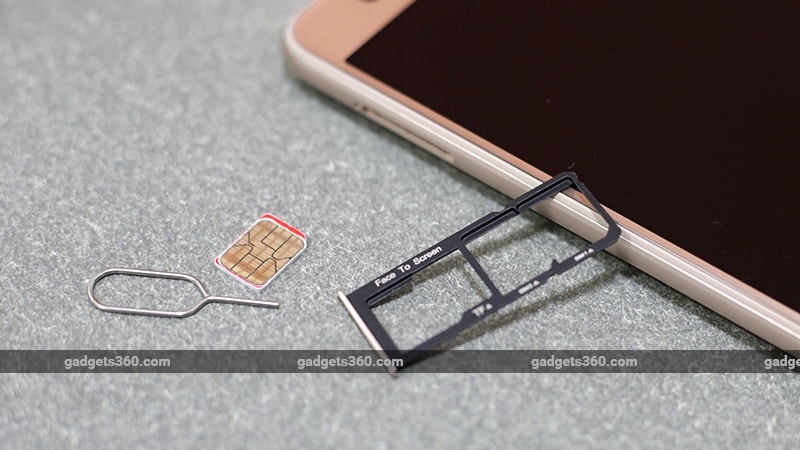 Coolpad will be selling two variants of the Note 6 in India – one with 32GB of storage and another with 64GB of storage. Both variants have 4GB of RAM. Our review unit is the former, with 32GB of storage. Other specifications include Wi-Fi 802.11b/g/n, Bluetooth 4.0, FM radio, 4G with VoLTE, an accelerometer, compass, and proximity sensor, but no gyroscope.

Software is a bit disappointing, as the Note 6 is still running Android Nougat 7.1.1, with an outdated security patch (December 2017). Most phones these days ship with Android Oreo so there’s really no excuse for not having it. Coolpad tells us that as of now, there’s no news as to when or if it will get Oreo.

Android has been customised heavily with a skin called Journey UI. It’s a single layered interface with a custom icon set and the option to change the theme. The notifications shade also gets a new look but we didn’t like the fact that notifications can’t be swiped away easily. Instead, you have to hit ‘Delete’ after swiping right or left in order to get rid of each one. This is a slight hindrance and is something we also noticed about Oppo’s ColorOS running on the Oppo F7 (Review). 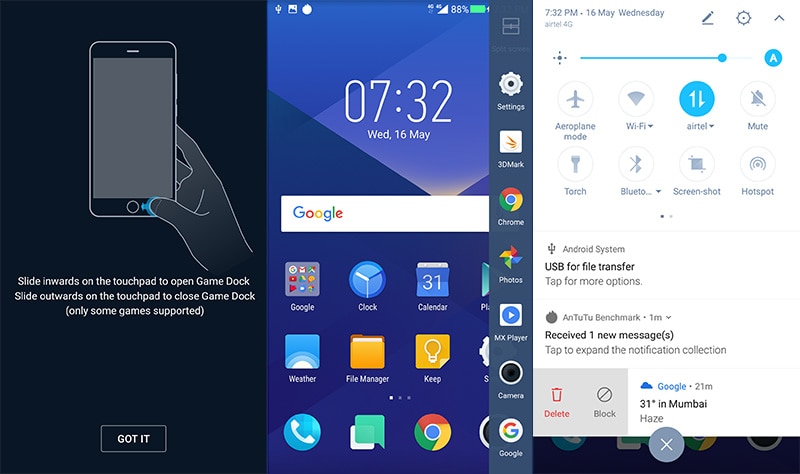 The Note 6 supports gestures to call up its Smart Dock, Game Dock, and Scroll Screenshot functions. Scroll Screenshot only works with UC Browser (but not Chrome) and a few other places like the Settings app. Smart Dock opens a panel of recently used apps, which slides in from the left or right side of the display, depending on which capacitive button is used  for the gesture. When you’re in a game, performing this same gesture brings up Game Dock, which is an overlay with options to block notifications, enable a blue light filter, and change the performance mode. This doesn’t work in all games though.

Coolpad preinstalls a bunch of apps including Hungama, Ola, Xender, UC Browser, Amazon Shopping, Prime Video, UC news, NewsDog, and Facebook. Thankfully, all of them can be uninstalled, if needed.

General app performance is good and the interface feels fairly fluid and responsive most of the time. We noticed some intermittent sluggishness when opening heavy webpages and even zooming in and out of Google Maps, but it works well otherwise. The phone doesn’t seem to consume too much of the RAM with general usage, as despite all the skinning done to Android, we usually had about 1.9GB of free RAM.

UI navigation is a breeze too, especially once you get used to the gestures. We just wish that the capacitive buttons had been more prominently marked, as it’s hard to find them, especially since they don’t light up.

Call quality is decent, and the phone has a Wi-Fi Calling option which can be enabled on networks that support it. There’s also an option for call recording when you’re on a call. We didn’t have any issues with the Note 6 getting too warm either. 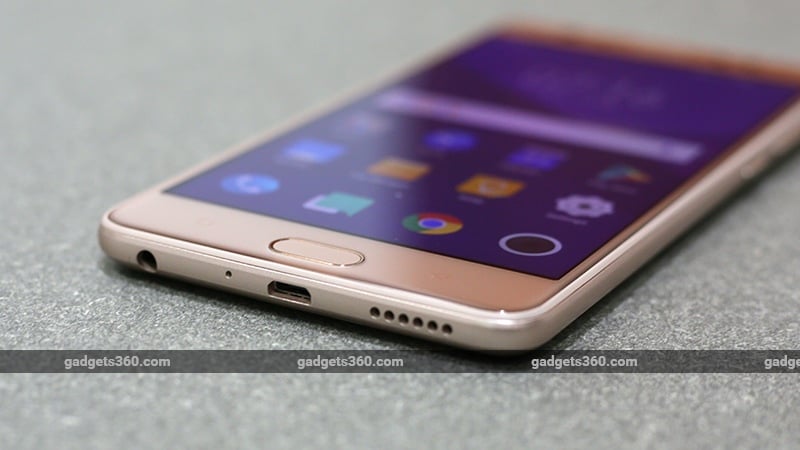 The large display of the Note 6 could have been good for watching videos on, but the low brightness means you don’t get the best experience. Even when indoors, we often had to max out the brightness to see things clearly. Automatic adjustment isn’t too quick either, and often fails to get the level right. Audio quality from the bottom-firing loudspeaker is average, and the bundled in-ear headset performs better.

All our high-biitrate test video files played well, up to 1080p resolution, and the phone also supports most popular video and audio codecs. The Note 6 handled games well too, although with heavier titles, the graphics quality usually defaults to a lower setting. Xenowerk, which is a third-person shooter, for instance, defaults to the ‘Medium’ preset on this phone, but it does work fairly well even when you bump it up to ‘High’.

Coolpad has fitted the Note 6 with two cameras in the front. There’s an 8-megapixel primary sensor and a 5-megapixel wide-angle sensor, for group selfies. There’s also a fill light on the front, for shooting in low light. Selfies taken with the main camera appear grainy even with good lighting, and this is more noticeable on objects in the background. It also missed the mark with the white balance a few times. Surprisingly, the wide-angle camera managed to deliver slightly better shots but still had the grain issue with background objects.

The fill light is useful for individual portrait shots but not powerful enough to light up multiple faces in a frame. The camera app on our unit also had a glitch, and the buttons for switching between the two front sensors would disappear as soon as a shot was taken. The only way to get them back was to switch to another screen, such as the camera settings or photo gallery, and then come back to the viewfinder.

The 13-megapixel sensor at the back has an f/2.2 aperture and features phase detection autofocus. With adequate light, the sensor is quick to lock focus, and shutter lag isn’t too much of a problem. The resultant colours, though, are a bit dull and there are plenty of visible artefacts in distant objects, which is a result of over-sharpening.

Close-ups and landscapes shot during the day have passable quality but that suffers in low light. Autofocus gets sluggish too, and it takes a while to focus on close-up subjects. There doesn’t seem to be any HDR mode, so when shooting against the light, you’ll have to settle with poorly exposed shots. 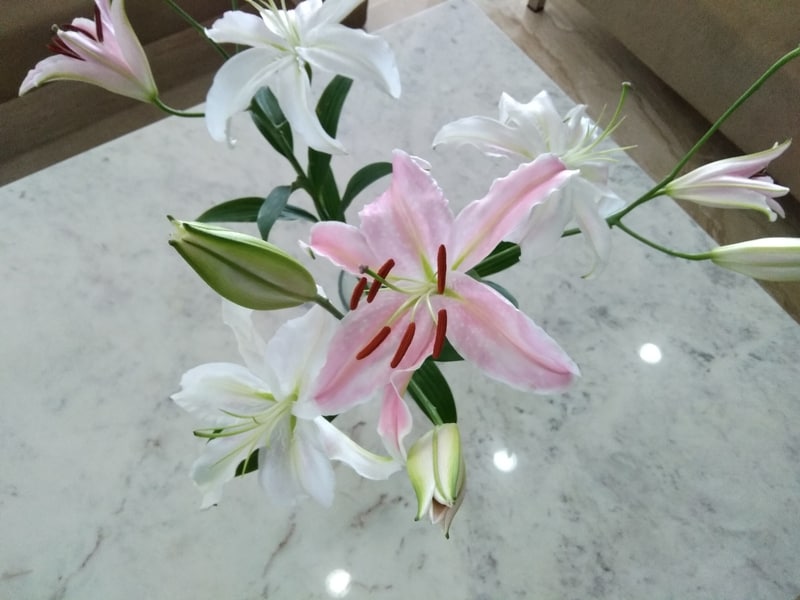 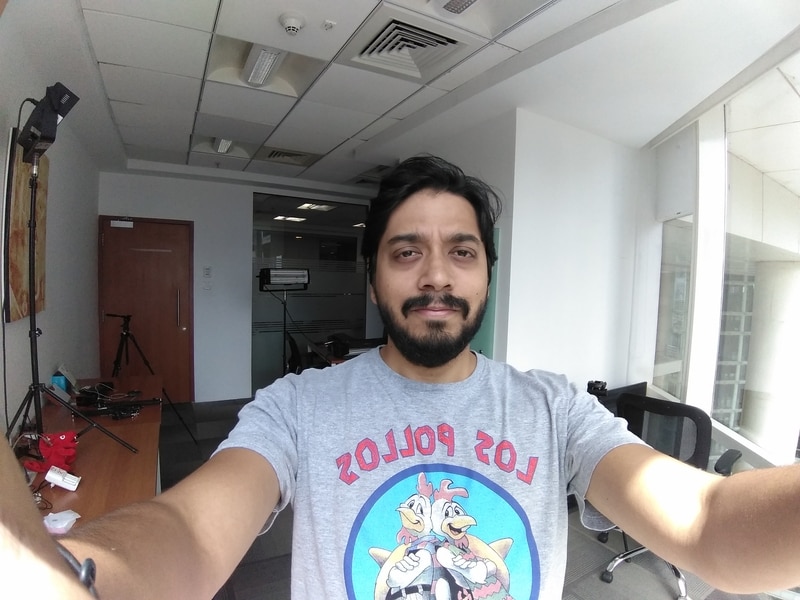 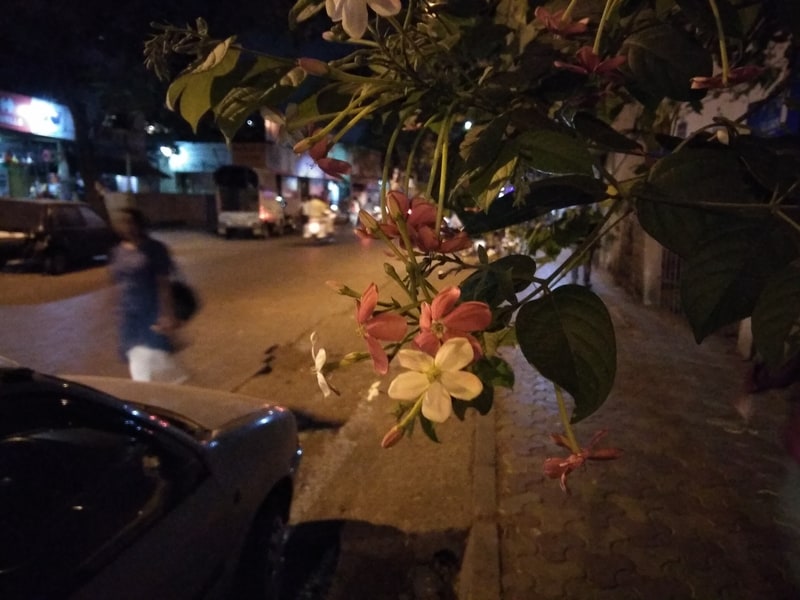 Video quality is also quite average. There’s no stabilisation so handheld movements result in jerkiness in the footage. Slow-motion video quality isn’t very good as the 720p output has loads of interlacing. The camera also hunts for its focus continuously when shooting, which is quite annoying.

Erase Mode is one of the more interesting shooting modes, and tries to let you eliminate unwanted objects from an image. The camera takes multiple shots of the same scene and automatically tries to eliminate anything that’s not there in all the frames, which works decently for cars or people walking through your shot.

Battery life is one of the strong suits of the Coolpad Note 6. The 4070mAh battery easily lasts for a little more than a full day with regular use, which is good. Charging is a bit slow, and the phone doesn’t support fast charging. The bundled 10W charger takes nearly two and an half hours to fully charge the battery. In our HD video loop test, we managed to clock around 14 hours of continuous playback.

Verdict
The Coolpad Note 6 has a few strengths. It’s built well, looks presentable, and has good battery life. The Snapdragon 435 isn’t the most appealing SoC at this price, but it’s competent enough to handle the usual messaging apps and that odd game or two. The offline availability of this phone will be a big draw for many people who still prefer to try before they buy. Do keep in mind that the cameras are pretty mediocre and the display is relatively dull. Also, while the older version of Android doesn’t really lack in essential features, Coolpad needs to rectify the outdated security.